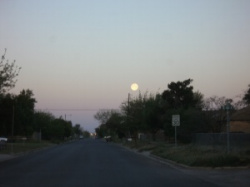 Image:  Early morning in Lamesa and the moon setting I was surprised the picture came out so clear.

All sorted an’ a bed for the night

But this mornin’ a surprise, couldn’t believe my eyes

Not in my pocket where they should have been

Not in my bags or anywhere, couldn’t find them nowhere

Searchin, high an low, without them my car ain’t  gonna go

To bring a car to replace the keys that I lost

An’ I’m thinkin’ “bless my soul, in my budget that’ll make a hole”

Then my eyes alight, on table, an’ a beautiful sight

My car keys are found, soon to KEPT I’ll be bound

128) Radio interview done, it was me an’ Mikes first one

About what was to come an’ then some

An’ how on this part of my roam

Comin’ to Lamesa feels at times like I’m comin’ home

Then a brief aside about drivin’ on the opposite side

Then my poem read with ease, about my missin’ car keys

An’ we send our love, best wishes that tell, we hope she soon gets well

Mike is Mike Martini who replaced Don Sitton who passed away last year. He is  agood capable presenter with his own unique style, and a good interviewer

Now I know where they are without fail, cos’ I hung ‘em on a handy nail

Call at the library, leave my details and go see

Fire Chief Larry, now a J. P. gave him info about how it’s gonna be

Adding he’ll try to give us a look an’ see

We talk an’ I say I’d better behave, not behave like a knave

I’ll try not to speed but tarry

An back at the centre works goin’ steady, getting things ready

Part of the Poets Road Show and, it says back by popular demand

Now we find time to unwind

Yes first day almost done, an’ tomorrow’s another one

132) This morning got my car keys without fail,

Cos’ I’d hung them on the nail

Showered, breakfast, then once more I gotta be at KPET

Show done, great fun, an’ once more I run

With leaflets, flyers an’ the rest, promoting Earth Fest

I’m glad I bought it afore, cos’ here it’s 14 cents a gallon more

Sure makes me feel, like I got a real good deal

Savin’ a pretty penny, an’ so far I’ve hardly used any

So it makes sense without doubt

An’ I’m feelin’ sore, cos’ I tripped an’ fell, it hurt like hell

But I had a go at mowin’ the gras, it was a work of art

Till the mower stopped an’ refused to start

Then as the day got longer the wind got stronger

So I said with glee “sounds good to me

It was catfish; I knew the score having eaten it many times before

Soon it was cooked; I thought how good it looked

Perfect at this part of my roam

With a sprinkling of salt, an’ a good splash of malt vinegar from home

We really did have catfish on the table

Boy was I sore, an’ this mornin’ it’s hurtin’ some more

A bit of pain, I’ll try to make sure it doesn’t happen a again

Gonna watch where I put my feet,

Next time I’m walkin’ down a Lamesa street

What to say when I go to KPET Radio

Promoting for all I’m worth a festival for the earth

For a community which in its own special way

When I go I ain’t  gonna rush

But for now enjoy the stillness an, the mornin’ hush

Each of us in our own way, with something different to say

On the festival’s opening day,

And the rising of the sun, glistening on the morning dew

Just heard the poets are gonna be few

One on his way, can’t get here till later today

For the rest, other things have got in the way

So it seems this travellin’ bard as such, may have to recite twice as much

It goes swell we can tell,

Our final read from the page, at a nursing home called Sage

Then away, back to the studio on Earth Fests first day

Work goin’ steady to get things ready, been quiet so far today

Cos there’s still late afternoon an’ this evenin’ to go

Open mic not while eight, Lyn says “we don’t have to wait”

Her idea took seed, we gathered round the table to read

Her, Phil, William an’ me to another four

Goin’ round in turn with a poetry score

Our small audience were delighted as each of us recited

An’ we’re thinkin’ “that sure was worthwhile”.

Cos’ it’s my last day, tomorrow I’m away

On the next leg of showcasin’ my poetry art

An’ tomorrow South I’ll run, with the rising of the sun

An’ I’m lookin’ at what’s cookin’ sizzling away

Time to reflect. Try as we might, not all things went alright

But what went well was really swell

Look in on Connie give her some cheer

Back from hospital, won’t see her for another year

An’ it seemed right to bid my friends good night

An’ use a motel for my last night

But I have to be elsewhere, another festival, more poetry to write an’ share

Now I’m pennin’ this ode an thinkin of tomorrow

When once more I hit the road,

An early night seems about right

An’ everything’s laid out just so,

That, after I’m showered an’ dressed I’ll be ready to go