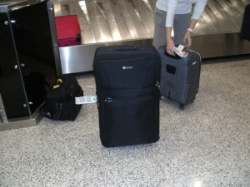 Image:  My suitcase at Austin Airport this year it arrived at the same time.

The day after we should have left the EU

Look to the day ahead and more, as I begin my 9th poetry tour

Into a fog bank nothing to worry about

A few minutes later and I’m out Nothing to fear, Manchester’s usually clear

An earlier flight this year, longer lay over at Heathrow

So hopefully when I get to Austin I find, my suitcase hasn’t been left behind

Then fate decides to play a little trick, not expected, twice my bag rejected

Swabbed for drugs came out clean, then the problem was seen

As soon as it was known sit was all fine

Customs guy said with a smile as I came away

Next time I suggest you put it in the tray

22) Breakfast had for this travellin’ lad. no denyin’

Egg an’ bacon sandwich from KFC was satisfyin’

With hashbrown an’ coffee to wash it down

My 9th Texas roam an’ even the airport feels like home.

Just need control to say so

08:04: Cockpit door shut we’re on the move sure feels good

08:08: Safety briefing done hurray that’s it now were away

08:19: Above the clouds in the sun, my 9th American adventure has begun

Approx. 10 minutes till we land Good progress made it did abrade

Plane banks right, levels I can see the ground, that’s it were going down

Ground becoming clearer as we get nearer

Undercarriage down lower we go London below

Boarding passes to show for which way to go

Find out where I need to be, info board says Gate Area C

No need to rush first find the room for multi-prayer, two already there

So my prayers begun two faiths praying as one

Then to where I need to be, made my way to Gate Area C

Now we’re boarding in group order, I have to wait a bit more

28) Once again boarded in good time, worthy of a mention in rhyme

Now to the runway we’re goin’ and I’m knowi’, an’ I smile

It always seems to take a while, then there’s the extra thrust an’ we’re away

Get ready Austin The Road Poets on his way

Flying through the blue hoping his suitcase makes it too

29) Inflight entertainment on the go but I don’t know

How to get the games working but no need for dread

I’ll listen to music instead, Handel’s Messiah boy does it inspire

Me to take the time to compose a rhyme, No time for napping

I got my foot tapping gently to a beautiful choral refrain

An’ I’m lost in music again

30) Ungava Bay below, Canada to follow, just over 5 hours to go

Inflight entertainment not so good in the main

Played some tracks before but they won’t play again

Landed through customs, then a sight I wanted to see

My suitcase was re-united with me

Booked in alright, that’s it for today, I’m havin’ an early night