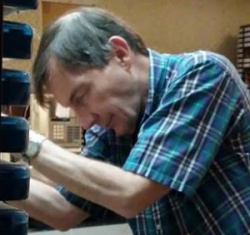 Image: Don Sitton legally blind for his entire life was a presenter at KPET Radio in Lamesa West Texas for 29 years, beginning in 1989. A familiar voice on the morning show he used to interview attendees at the Lamesa Forrest Fest. We met in 2011 when I first performed ther and struck up a friendship that lasted till he passed away on October 13 2018. I always looked forward to our intreviews I shall miss him this year. Poem 5 was written as a tribute.

To Texas start getting things on track.

Start off right, book the flight once that’s out of the way,

It’s insurance and somewhere to stay

Then a car for drivin’ round so look at the offers

An’ see how much I can keep in my coffers

Spent a few days looking through a maze

Looking at the cost trying not to get lost

Do I want one stop or two, or did I want to fly through the night

On the way arriving the following day

Or let the train take the strain

I told him the time it would take and the cost

So my search carried on I kept on trying

I did and things were back on track

Change at Heathrow 2 hours before the final flight,

Hopefully time to get my suitcase on board, before I fly out

So it was booked and further to my delight

And there’s one thing more I can tell,

The money I saved paid for my insurance as well

I’ll look among the maze of so called offers,

And see how much I can keep in my coffers

Then I found I was in a fix,

Cancel then look again search not in vain

I kept looking round then accommodation was found

Looked a good deal but when I got the confirmation letter

Thought that’s not bad but later

Something made me feel I could do much better

So I began to surf, the internet for all I was worth

I was glad I did for; I found I saved 90 dollars more

They’re quite good in the main,

Little extras I always feel I get a good deal

So took roadside assistance there and then

I thought what a mess I’m often without internet access

Which could be anywhere, so I cancelled thinking I’ll do it over there

But if warning and advice are heeded, hopefully it won’t be needed

An’ just one thing more, I hope my first car lasts me all tour

4) Car hired to get around wherever I’m bound

Cos’ I downloaded a map of America into mine

Lastly taxi to book, one phone call was all it took

When my ESTA’s sorted I’ll be good to go

I was told my friend Don has passed away

The local radio presenter who many know

At Forrest Fest I was a regular on his morning show

Lettin’ him know what was goin’ down

As The Road Poet arrived back in town

Perfect at journeys end, like droppin’ in on an old friend

Now on his old slot someone else may be billed

It’s getting colder as the year gets older

One last chance to have my say before Christmas Day

What I like at the last Leeds based open mic

So I went and gave vent to what I was feeling

Had the audience reeling

With what I rendered, all too soon the evening ended

It’s been a blast but not my last,

As I now remember, I’ve got a final one

At Cleckeaton on the last Saturday in December

Livelily not drear a good way to end the year

Among friends and poets we know, it really was the way to go

Me the spotlight and to my delight others there to recite

I could tell it went really well

And one thing was clear, let the poetry roll and roll on next year

I was found, Halifax bound. My work was heard at Spoken Weird

Makes me smile takes me back a while

Then as if on cue, the city lights come into view

An’ for an instant I’m back in Austin again.

Plus before long got to get my tour planning on song

I can relax and wait to be once again Texas bound

More to come in Bradford York and Leeds

And read a story at Wakefield’s  Jackanory

Then there’s Febrary and March to come

Read more and then some, then come March 30 I’ll be away

On my annual poetry tour in Texas USA

My card denied when I tried to pay, to my dismay

Try again, all in vain no way can I pay

E mail to a friend, reply says it’s a problem at their end

But not to worry they got me on a list, so I’ll not be missed

So mind at rest I can now look forward to

And that’s not all I’ll tell, I’ve got my shows guest slots filled as well

But my attempt came to nought

Try and try in vain, I couldn’t pay again

Later I tried again to pay, but the system didn’t want to play

Then news that made me cheer

An e mail said you’re registered pay when you get here.

So now look at The RGVIP site and book

But they’d got my application someone did tell

To the USA from March till May

To get me to the American nation

Needed renewing so now it’s done, and valid till 2021

And more they say, Lent, Ash Wednesday and Pancake Day

On the 31st the clocks go forward, an hour’s less sleep but I’ll not be sore

Cos’ I set off for Texas on the day before

Saw it last year being made ready went over there

Opened early this year now I’ll be working there

More and more room, space to share, or all injured animals large or small

An’ I’ll be there playing a part in it all.

On my annual poetry tour

Five recorded programmes to play while I’m away

Hope they like what I’ve done, what I’ve recorded music wise,

And for way with words many a poetry score

From my 2011 first USA Poetry Tour

Milo laid asleep on me

I’m enjoying the moment no need for sorrow

Cos’ I’m away early tomorrow

And the day ahead what’s to be done

A few bits more to buy before I fly

And outside the daylights growing stronger

19) Come the day come the hour, print of my boarding pass before I shower

Didn’t work at first began to fear the worst

Then I noticed I’d used M not N

In my name, soon corrected then as expected

No longer replete my paperwork was complete

But another one sought and bought

And so one by one all the tasks got done

And a good sleep before I leave early for tomorrows flight