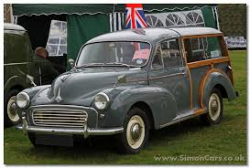 They were vans actually in the early days.  He wanted vans so he could do a bit of fetching and carrying on the black.

The first one he ever had was a big blue Bedford.  I reckon it would have been in the late 50’s.  I can’t remember what I had for my breakfast these days but I can recollect from a distance of 60 years its registration – YRB 370.  You had to start it with a handle shoved underneath the radiator grille, making sure your thumb was on the outside – it kicked like a donkey if it misfired.

The driver and passenger were separated by a raised metal platform which a third person could sit on; well, at least until your arse started frying.  It housed the engine underneath it.  He threw a mattress in the back for me and Linda to sleep on while we were driving to Devon on a camping holiday once.  It took us about 12 hours in those pre-motorway days and at the speed we went.  We were so overladen and the van so underpowered that we had to reverse up some of the hills around Torquay.

The floor on one of these was rusted  through in parts and I remember him telling some of my mates who he gave a lift to once, “Watch where you tread.  You might go through”.  That would have made for a front page of the Hucknall Dispatch if it had happened on The Ramper.  Some time after, to comply with his stringent Health and Safety principles he laid some boards across the holes.

Some of these had a column gear change and you had to double declutch to change down from 3rd to 2nd.  If that’s Greek to the modern motorist, so too no doubt would have been the linguistic currency of the motor maintenance D-I-Y er, such a points and timing and top dead centre.

Another recollection I have was of a job he pressed me into.  I’d been off school with a cold but he told my mam, “If he can mope about here he can help me”.  Helping him consisted of shovelling and bagging turkey shit at a nearby farm as the rain pissed down.  Naturally, all this was loaded into the van for tipping on his veg plot.  It stunk for weeks.

His transition off vans was progressive with his next one being a Morris Traveller, which for the unfamiliar, was a Morris Minor with a wooden greenhouse on the back.  And it was the car I learned to drive in.  Its unique characteristic were its trafficators.  A forerunner of indicators these were Morris’s hi-tech solution to waggling your arm out the window to indicate your intentions.  They were orange arrows which shot out of the top of the door pillar.  They didn’t flash so went largely unseen by other motorists, making for some lively encounters.

His affair with vans ended with a Mark III Cortina.  Lovely gearbox.

I suspect this will chime more with the anno domintically challenged, MC, than with those whose experience began with Catalytic converters and air con.

Don - who, me? I was merely commenting in tongue-in-cheek fashion. ?

Ah MC it was nice to see you keeping
the 'short line' poetic form despite
no stanzas.

I still can't get my head around
the metrical rhythm of each line though.
Iambs and trochee's seem mixed up
with all sorts of foreign things

Ah - the memories this brings back. Sheer poetry!
My own experience of owning a van (the only one I ever owned...sorry for the "own" repetition) was a green Mini-van
bought for £130 back in the mid -1960s. Two seats and room for
a small flat removal - or, in my own case, a bike and available for
any pal's ask for help with something or other of a bulky nature.
It was a tight squeeze for my lanky frame but I managed - mainly
because it was great for buzzing around narrow dockland streets
and cheap to run...a BIG plus even when petrol was around 5 bob
a gallon. Younger readers should know that a "bob" was a shilling
and in those pre-decimal days you got 20 of them to a pound (£1)
sterling. Now you can work out how much less you get for your
money now with post-decimal currency. It was sold on as unfit
for long distance travel to my parents' home to the shires...mainly
because the lack of comfort and the road noise transmitted via its bare metal body made it seem like driving an amplified metal
torture box. .

Thanks, Kev. I peddle the “What is a poem” theme tongue-in-cheek. But if folks want to argue that there are no rules, well that gives me free rein to post anything. My next post might just be an audio of a dog barking.
I’m having 2nd thoughts about those trafficators. I might be confusing our shooting brake with my Uncle Mick’s Moggy Minor.

Well written John, and of course it's a poem.
You could have used those holes in the floor to your advantage, getting up hills Fred Flintstone style (a bit extra peddle power).
my youngest son would have loved the Moggy Traveller, to this day they're still his favourite car.

You have a point there JC.

They were vans actually in the early days.
He wanted vans so he could do a bit of
fetching and carrying on the black.

Another possible form I have seen on the site? (which seems to get no comments so maybe not such a good idea)

They were
vans
actually
in the
early
days.

He wanted
vans
so he could
do a bit of
fetching
and
carrying
on the
black. (back?)

Notice I have kept it in stanzas to still satisfy the die-hard poets among us.

Ah, Don. I thought the same. Still do, truth to tell. But so many contributors on here have argued there are no rules to poetry.
So there you have it. They'd say it's a poem. I shan't argue.
(Perhaps if I chopped it into little lines?)

I'm still trying to get my head around how this qualifies as 'poetry' for inclusion in a 'poetry' website?