THE BATTLE OF TOWTON 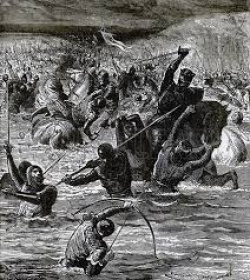 (I walked the trail of England's bloodiest battle today.  Estimates run up to 33,000 dead.  It's an exposed and unforgiving place even without a blizzard and someone trying to cave your head in)

I believe that was the year

There happened a bit of a fallout

With Yorkshire and Lancashire.

For brothers like this to come to such blows

It needed the cause be a good ‘un

But t’die were cast when a butcher from Hyde

Reckoned theirs were better black pudding.

Now Yorkies and Lanks come from the same tribe

It’s just that them west side of the hills

Are Yorkies wi’ t’brains taken out.

Then when we developed a new hybrid T

It got up Lancashire’s noses

So they called it the “Wars of the Roses”.

The armies they met at Towton that day

Arranged in long lines for the battle

The Lanks banged their drums and shouted “Ya Boo”

“We’re going nowhere till we’ve had us tea”

Said their captain – one Freddie Flintoff.

Well York won the toss and they opted to bat

The Lankies reply left them much to do

As Flintoff came in with his bat

“I hope that’s a good ‘un” sneers Trueman to ‘im

Then Trueman he starts with his run-up

Resembling a steam train with hair

But Flintoff who pulls though his bouncer for 4

Says “Gi’ me a couple more there”.

They fought themselves to a standstill

Says a Lank “We’re at logger’eads”

Says another “Yer said this were Towton”

The field that day it were Yorkshire’s

We waved them Lanks Bye-di-byes

They ran that fast when they wanted to pee

They didn’t unfasten their flies.

This settled the issue for 20-odd years

Till we heard again Lancashire thunder

And this time they fought with a new button-‘ole

Then Flintoff bowled so fast to Fiery Fred

He knocked his bonce clean off onto the ground;

Then kicked it wi’ ‘is boot and chuckling said,

“Uneasy lies the head that wears the crown”.

Both Trueman and Statham were at the early end of my interest in cricket, MC. Popular wisdom was that they were the ideal foil for each other. Trueman was quicker and more aggressive whilst Statham had the greater precision and control.
As a plastic Tyke, Brian, (-you need much more than the 40 years I’ve been here to qualify-) there are few greater pleasures than having a Tyke buy your beer. When it happens, buy a lottery ticket.

A Lank and a Yorkie went out together for a beer or two. At the end, the Lank said to the barman "I'll pay!"

Headlines in the paper next day...YORKIE VENTRILOQUIST FOUND SHOT DEAD.

I always suspected that sport and war were all the same north of
Watford! Trueman enjoyed the nickname "Fiery Fred" but I thought
Brian Statham possessed a quiet death-dealing delivery in action.
It's likely they despised Brylcreem up north -
And probably scoffed at our Denis,
But for Middlesex and Arsenal he set forth,
An elegant free-scoring menace!