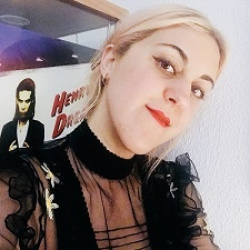 The history of Western poetry is the history of poetry in translation. So says Alex Bellos in his book Is That a Fish in Your Ear? – the amazing adventure of translation (2011, Penguin).  He does so as a riposte to the oft-mooted notion that poetry is what gets lost in translation.  The truth for many is that attempts at translation bring greater understanding of one’s own work, and a fresh take on what exactly we mean by poetry or a poem.

Someone who understands this more than most is Sale Write Out Loud’s fantastic guest this coming Tuesday (15thJan): Alicia Fernández (pictured), an “undiscovered gem” of a poet according to multi award-winning poet John Foggin, in his excellent blog. If you want to understand what it’s like to write good poetry in a language that is not your mother tongue, read Alicia’s fascinating account in John’s blog, where she talks of “the blessing in disguise of bilingual writing – that blurry line between grammatical correctness and awkward or made-up expressions that can result in a distinct voice.”

Alicia was born in Spain and works in Leeds as a translator. Her poems have appeared in various anthologies and been published in magazines like Dream Catcher, Riggwelter and the Saboteur-shortlisted Strix. Her pamphlet 'If Moments Were Places' was published by Half Moon Books in 2017. She won the title of Chapbook Champion at Ilkley Literature Festival 2017, awarded by former BBC Poet in Residence Daljit Nagra, was commended in Prole's Laureate Poetry Competition 2018 and longlisted in Mslexia's Poetry Competition 2018.

Alicia’s fellow guest at Sale, Nick Allen, claims to get gets most of his sustenance from double espressos and malt whisky, and after a lifetime of denial now publicly admits his poetry habit. He writes of “the internal logic that acknowledges that sometimes the blank page is the greatest opportunity”.

Twice runner-up in international poetry competitions and highly commended in the OWF Otley ‘wildlife’ competition, his first pamphlet, the necessary line, was published by Half Moon Books in October 2017.

Beat a path to Sale next Tuesday, discover these two gems for yourselves, and strut your own stuff at the friendly open-mic hosted by our unsung gem of a host, Sarah Pritchard. See our gig guide listing for full details and map/location.

Upcoming guests at Sale includeChar March in February, Dominic Berry in March, Maz Hedgehog and Joe Williams in April. And a wonderfully friendly open-mic to boot.

Tickets at the box office: £3/£2 concessions (including students)

French films have often intrigued me, with their idiosyncratic way
of seeing and depicting things - so different in many ways from our
own on the other side of the Channel. The thought processes and
their results no doubt find their equivalent in other countries.
It seems likely that interpretation is of as much importance as
translation - one essentially at the service of the other. Even
Fitzgerald's famous translation of a well known poem is apparently
challenged now for its accuracy. I wonder if the ancients would be remonstrating about how their work has been presented to the
world in print. In short, translation - especially of poetry - is fraught
with attendant risk directly related to interpretation and there is
much to be said for staying with one's own language when writing
if one is not to be misunderstood (misinterpreted?).