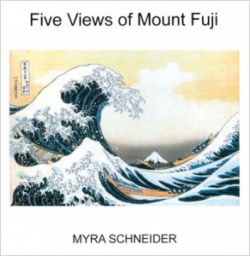 Myra Schneider was born in 1936, and grew up in Scotland, London, and Sussex. She has published a number of poetry collections, writes essays and reviews for literary magazines, and has co-edited anthologies of poetry by contemporary women poets. She is consultant to the Second Light Network of Women Poets, and she runs poetry workshops and courses and is a tutor for the Poetry School.

Her pamphlets explore specific themes from multiple viewpoints that encompass art, history, her background and wider topics such as environmental issues and women’s rights. It is an approach that goes from the particular to the universal, involving the reader in a process of self-discovery that relates to the poet’s artistic experience.

What Women Want, published back in 2012, is a fine example of this method, opening with ‘The Composition Hut’ that echoes Grieg’s piece of music where the hut is not only a retreat but also “a perching place” from which the poet has a privileged view “to face the discomposure/of composing and, undistracted, follow the thoughts/slippery as eels travelling beneath the surface,/let them lead me to the disruption and pain/beyond the trees.” This privileged view develops in the poems with metaphors and images in fascinating lines.

In the description of the works of art there is an inward study of the subject through its characteristics and colours. The ekphrasis develops further in symbolic meanings and connecting to personal experience:

This is old men, truculent, not caring a damn if buttons

are undone, their years of knowledge shut away

in a drawer to be pulled out for anyone who will listen.

This is mon père – my father dressing-gowned

on his throne in the Home, joking with the helpers

he trusted, failing to rule the others, complaining

about the world and its incompetent governments.

The advantaged vision of the poet unfolds in poems such as ‘Garden’, where the wandering “among the flocks of marguerites”, watching “the butterflies: their flittering, momentary coupling, alightings,” evokes literary references to TS Eliot’s ‘Burnt Norton’ suggesting an inner figurative exploration of the garden digging beneath “the earth’s stubborn surface”. The power of imagination breaks this surface “learning to read//and the immense far ahead can be moulded/into any shape you choose!”, and the past becomes “an ever-expanding suitcase”. This process from the ordinary to the abstract of imagination engenders a boundless perspective that “tastes of those rare moments/when a silence suspends the ordinary/and the unattainable seems within in reach.”(‘Oranges’) This allows a constant crossing of the threshold between the poet’s surroundings and a wider view that empowers the individual and gives space to potentially infinite viewpoints.

The second section of the pamphlet is dedicated to Caroline Norton, an aristocrat who lived in the mid-19th century and had an active role in promoting social reforms through her writings and her political connections. Norton herself was a victim of her husband’s abuse. He also abducted her two sons when she left him and confiscated her earnings. Schneider’s narrative sightsees Norton’s life in a sequence of poems that engages with the reader at an emotional and social level. Norton’s commitment was triggered by her personal painful experience of injustice which the poet narrates with precise references to her letters, events in her life, and quoting her own words. The reformer’s work aims to liberate women from the enslaving possession of their husband in “this world of changes”. In the long process of acquisition of women’s rights, Caroline Norton was a forerunner who obtained some important results, well aware that “It won’t do to have TRUTH and JUSTICE/ on our side; we must have LAWS and LAWYERS.” In today’s society where the #metoo movement has such a large following, Schneider’s poem seems more relevant than ever.

Five Views of Mount Fuji, published last year, comprises five ekphrastic poems of five prints from the series of Mount Fuji by the renowned Japanese artist Katsushika Hokusai who lived in Edo (present Tokyo) in the late 18th and the first half of 19th century. His work could be reproduced several times using wood block printing. According to Japanese tradition, Mount Fuji is a source of long life, of immortality. It has a striking regular shape but at the same time it varies from view to view. In Hokusai’s pictures, it is a constant presence in the background while interesting scenes happen in the foreground. The depiction of the mountain can be interpreted as a pretext, or a guardian, while the real focus of the pictures is on showing and commenting on Japanese life and people.

The five poems with related pictures describe the prints with vivid images highlighting the choice of colours, and compelling descriptions such as “a moody plum-black”, “bushes sing with green”, “benign azures sift into lapis lazulis”, or “foaming white”. Similarly to the ekphrasis of the previous pamphlet, the poet intends to give a different wider vision where imagination opens to a broader idea beyond the picture and the scenes of the world that it represents. Mount Fuji is the emblem of this process:

Don’t linger by the cherry blossom in the valley

even if you’re feeling fragile, a voice insists

in my head, when you begin to climb

the mountain will be irresistible.

(‘A Shower below the Summit’)

Mount Fuji is the sacred site, the “keeper/of the secret immortality” where the poet looks for renewal and hope through art. Everyday scenes evolve under this eternal presence, protected and influenced by its shadow. The uncertain events of life, which imply sorrow and death, seem to disappear at its sight:

And what I shall never forget is how

in the small hours this morning when I lost

my footing, slipped into bottomless marsh

and was struggling against the black liquid

sucking me in, I was suddenly aware of the river,

and how I summoned the strength to pull free

as soon as I saw Fuji across the plain,

its peak white-headed, a beacon of hope

which anyone can view from anywhere.

In spite of human fragility, Mount Fuji seems to represent “messages/sent from worlds in measureless space.” (‘Measuring the Pine Tree’) The sequence culminates in ‘The Great Wave’:

Magnificent as an emperor the wave rears up

and I gasp at the height, the extravagance

of its royal blue and foaming white, the roar

which outdoes a lion as it shapes a dragon

spewing spume far into the sky

to proclaim its success in dwarfing sacred Fuji,

The picture represents three boats heading bravely into a great storm wave, curving upwards in glorious hues of blues and white curling foam. It is striking and impressive in its apparent simplicity, and its greatness is not only in the impetus and power of the wave but also in the courage of the men facing it. In the poem the mountain is the protagonist. In its magnificence, “Fuji will endure” the wave, which is “less/than a grasshopper, a raindrop, a speckle” in comparison. Human beings will navigate it with their boats, surviving the odds of life thanks to an unquenchable sense of eternity and their capacity to persevere.