‘Freeman Street, Grimsby’ by David Cooke is our Poem of the Week 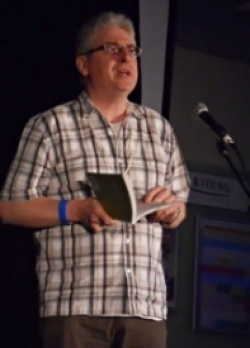 The first Poem of the Week of 2019 (and a very Happy New Year to you all!) comes from David Cooke, who wins it for the second time. His poem Freeman Street, Grimsby is a beautifully observed piece, all the more effective for quietly describing the economic decline of a once-thriving town. We're sure you'll want to read and re-read it. Our thanks to David for his responses to our Q&A.

Your online poetry journal, The High Window, that you founded with Anthony Costello, is still going three years after its launch. Do you regard that as a sign of success?

I'd like to think so, particularly as I stumbled into it almost accidentally. I had already laid the foundation for a small press, having revised and re-published my first three collections in a new 'selected' edition.  I had also set up a Wordpress site. I suppose I was really just playing with the technology, although I was thinking vaguely that I might also start a journal. However, I hadn't got any further than the name. Then I was introduced to Anthony who gave me the final nudge. Since then we have had twelve bumper issues and received a huge amount of positive feedback from both sides of the Atlantic.

When you launched it, you said you wanted to feature some poets that had been overlooked – maybe because they are not “connected” enough or sufficiently “fashionable”.  Is that still your aim?

Yes, of course. Any editor has to make his or her own call as to the kind of poetry they wish to publish. Without going into excruciating detail, I think I know what I like and can recognize the ‘real thing’. I have been reading and writing poetry for decades now and have seen fashionable names come and go. So put it this way, I think I am capable of judging poetry on its real merits rather than what is currently in vogue. There are so many poets clamouring for attention these days that it is often hard to see the wood for the trees. The less raucous voices can too easily sink without trace.

That ethos suggests some unease with the way things are currently arranged within the poetry world. Would you like to talk about that a bit more?

I'm tempted to answer with a sentence made famous by Francis Urquart: 'You could say that but I couldn't possibly comment.'  Well OK, if you insist! I started writing in the 70s and then by the end of the 80s I stopped for two decades, probably because I had a very stressful job as Head of Languages in a tough school. All my poems have been written in three concentrated bursts and only when they forced themselves on me. In the 70s and 80s I ploughed a lonely furrow and only got feedback from a couple of friends whose opinions I trusted. Somewhat mystifyingly, I started writing poems again in 2008, by which time I discovered that there had been a so called ‘creative writing boom’. I don’t have space to say too much about it here and I know that many people love all these endless workshops and courses and seem to thrive on them. If they do, best of luck to them! I’ll just say that, personally I don’t. It often seems to me to be little more than a money spinner for those who have ‘made it’. I also feel that some in this category are hyped beyond their true worth because of who they are, what they represent or what they say.

What do you look for in a poem that you would like to publish in The High Window?

The answer to this could end up being an essay. So I’ll be as brief as I can. When I read the poems in my inbox it tends to be blindingly obvious which poems are really bad and, to be honest, I don’t get that many. There are also a certain number where you think ‘Wow’ I’m onto something here!’ By and large though, I tend to be drawn to poems that seem to me to be authentic, by which I mean poems that have an emotional impact because they arise from a real experience which has been memorably expressed. This might also involve the poet engaging with, or playing around with, an idea or concept that is important to them. I believe strongly that a poet has to respect the basic rules of language. Some people equate ‘creativity’ with anything goes. I don’t. To be honest, the more I think about it, the harder this question is to answer.  There is no formula for a good poem. I’ll just sum up by saying that I don’t like poets who rant or waffle, whose poems are sloppy, pretentious, or full of clichés.

Your own poems have been published in a number of collections over the years, and you have a new book out shortly. Can you tell us a bit more about this one?

Reel to Reel is my sixth collection and is due out from Dempsey & Windle on 15 February. It brings together three sets of poems in my more ‘autobiographical’ vein. The title is taken from a poem in which I describe the business of recording music from the radio in my pre-digital adolescence. The book is divided into three sections or ‘reels’, each of which focuses on a particular phase of my life. I think, at the back of my mind, I must also have had Samuel Beckett’s play Krapp’s Last Tape. The first ‘reel’ revisits my Irish Catholic upbringing in Reading. The second describes the lives of the men and women involved in the once great fishing industry of Grimsby, a place I lived in for thirty-four years.  My poem ‘Freeman Street, Grimsby’ comes from this section. The tough and frequently dangerous lives of the fisherman had much in common with those of the Irish labourers amongst whom I worked as a teenager and on into my twenties. My father and, shortly after him, my uncle both died in the early 1980s as a result of separate accidents on two different building sites. Finally, I look back to various times I have spent in France, where I met my wife, and some of the other influences – musical and literary – that have shaped my life.

On a street where ripples of boom
and bust have long since subsided
beneath the tide of failure
the footfall of ‘three day millionaires’
kept all the rest in business.

Awaiting turns to land their catches,
trawlers rode at anchor, backed up
beyond the docks.  Their crews staggering
ashore to re-establish land legs
lost them again in pubs

where men now washed up at forty
nurse disconsolate pints;
while workless youths hang out,
honing their skills with cues
in a room above the Scope shop.

Marks and Sparks pulled out, leaving
a space filled by Mad Harry’s
discount store that held its own for a while,
until it went the way
of Tony’s Textiles, the Polski Sklep.

Along this windy channel
nothing much survives beyond its upper
reaches, where Asda thrives like a final
outpost. There’s a place that fixes hoovers;
an Alpha course that fixes souls.

From time to time – like a twinge
of conscience there’s talk
of schemes, regeneration: but who throws
good money after bad?  Everything Must Go!
the sign says, when it’s already gone.

I can only repeat that this rather sad, graphic poem does indeed capture the barren and jaded spirit of our times. I loved the line about the men washed out at 40 nursing their pints and all those dubious enterprises that blossom then disappear. Great poem, there's a real authenticity here. Thanks David.

Thanks for this, David.
Like '31, Garrett Street' in your book 'After Hours', the echoes of what has past speak strongly to what is now.
Congratulations on your well-deserved 'Poem of the Week' and on the continuing success of 'The High Window'.

Well deserved congratulations from a beginner! Agree absolutely (for what my opinion may be worth!) that ceativity is not 'anything goes'. That kind of poetry is infinitely easier to produce.

Having read your extensive comments and your excellent poem I would just like to say that there is still a breath of fresh air coming in, to put things into perspective . Also, regarding your experiences, these I too believe are often key to a convincing and engaging poem in one's own case. Some are "fortunate" in this respect in having such an "interesting" life to share even if that is one where they have come off badly. It's great to see anything from you on WOL!

All the best Ray .

I take on board what you say in your Q and A section David, particularly with regard to clichés something I am always aware I can so easily slip into. I am not really sure what is fashionable at any given time, but that probably says as much about me being generally unaware. Some good points well made here.
A great poem with a real sense of the times in which we live.
Love it

Congratulations on the continuing success of The High Window, David, and your personal productivity as a poet - and thanks for keeping in touch with Write Out Loud. I look forward to your new collection - and to visiting Grimsby and checking out Freeman Street some day. Greg Freeman (no relation)

A fascinating interview with a much-published poet who offers us a view of the worlds of writing and publishing that providing the less experienced of us some valuable insights; and a poem that catches the zeitgeist, offering political and poetical insights of its own. Thank you, David, and your anonymous interviewer.