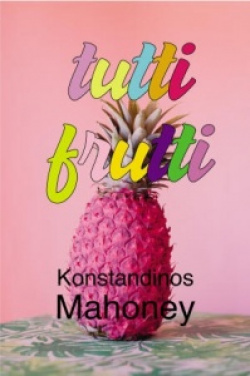 A skilled observer, Konstandinos Mahoney communicates his enthusiasm for life and language in every poem of Tutti Frutti, his honest, warm and perceptive first collection, which was second prize winner in the Sentinel poetry book competition in 2017.

Close encounters of every kind are the keynote. In settings ranging from London to Greece to Hong Kong, Prague and the US, the poems introduce us to lovers, parents, children, neighbours, ephemeral relationships that have left only a gleam of sensuality in the poet’s mind, and deeper relationships that have left lasting scars or memories of love and fulfilment. The rather garish cover of this substantial collection didn’t prepare me for the range and depth of the poems inside, though the suggestion of “pick’n’mix” sweets in the title is, on reflection, appropriate to its varied themes.

The first poems in the collection offer vignettes of a boy’s sensual awareness of his own and adults’ sexuality. ‘Tutti Frutti’ and  ‘Aunt Aphrodite’ are memories of early encounters with female desire and physicality: home from school, the boy “barges in” and sees

“… sun shining in stripes/on naked duplicated breasts …” and “little me” is drawn in to dance with his mother and her friend to the ecstatic music of Little Richard.

And when Aunt Aphrodite calls when he’s alone, she clearly wears no knickers, though the incident falls short of child abuse and is most memorable for the grotesque presence of the middle-aged Aphrodite, with “Gum stuck like a boil/between thin-pencilled brows.”

The agitation of the boy who is “trying to ignore her pendulous breasts/the sticky wetness on my tight-clenched knees” renders this a painful memory, though it’s simultaneously a wryly funny story of innocence.

One of my favourite poems in the collection makes a more tender reference to a Greek goddess. ‘Athena Nike’ tells how the poet’s Greek mother, in a museum where “she refused point-blank to let me hire a wheel-chair”, encounters a marble statue of the goddess, “marmoreal wings flaring behind her/skewed by a wind fierce enough to blow/her off-course …”

The old lady, “surgical stockings stuck out before her” stares through the marble at her own past, through invasion in Smyrna, flight to Alexandria, Athens in the occupation and everything else that has led up to this moment in the museum with her son: “gifting our story the ancient way/there beneath Victory’s beating wings.”

There’s another tender, sensual memory in ‘Dormition’, a title inspired by the Greek Orthodox Church’s celebration of the “falling asleep” of the Virgin Mary. The last tercet of this vignette is a beautiful evocation of a Greek shore: as a son helps his mother to float in the water,

From the shore drifts

a pulsing chant of cicadas,

the fragrant scent of pine.

Encounters with the poet’s father are of a different kind. There’s an ambivalence which only shows in the later poems, where through age and sickness the father who has been distant and controlling, “Stiff-backed, clipped tache”, inspecting his son like a sergeant-major, is seen as vulnerable, pitiable. There’s a hint of the poet’s complex feelings in ‘Passing the Ball’ in which the father is shaken by having dreamt of his best mate’s decapitation in the war, and the son dreams “That night, a ball lands at my feet/looks up, tries to speak.”

‘Mutiny’ and ‘Piano Practice’ flesh out the resentment of the adolescent boy. ‘Airborne’ offers insight to the father’s state of mind, mysterious to the young son but clearer in retrospect as an adult. When his father remarks, in a plane over the Alps, “Wouldn’t mind if we went down right now, together,” the son innocently wonders if the wish has been fulfilled as they safely land and leave the aircraft.

After the poems exploring childhood and adolescence, the setting moves to Mahoney’s adult environment. ‘Heavenly Turtle’ and ‘Night Market’ are vibrant with the sounds, smells and people of Asia. In ‘Aberdeen Street’ we meet another family; we’re in Hong Kong, hearing the creak of a harbour-side tenement, smelling

of body waste as the fragrant ladies

creep in at dawn to empty

We’re coming home with the fisherman father, through streets

And then we’re with the son as he listens through the wall to his parents making love, plays with a toy aeroplane, dreams of flying off one day, away from his father.

The last third of the collection is truly pick’n’mix: a train journey to Prague; ‘Chasing the Fall’ in the US, sexual encounters with beautiful bodies; a poem for Cavafy; a brief return to the dreary mood of ‘Monday’ as a schoolboy who hasn’t done his homework; the sadness and joy of having a daughter, as a little girl and as a grown woman.

The splendid inventiveness of ‘Dr Mirabilis and the Brass Wall That Will Save England’, which riffs off a claim by the 13th century alchemist Roger Bacon and a comedy by Robert Greene to make a comment on Brexit, introduces a final series of poems that touch on politics: transgender issues in ‘Pride’; illegal immigration in ‘African Icarus’; terrorism and the media in ‘Hell’s Kitchen’. And in amongst these, a joyous poem celebrating love and spontaneity, ‘The One’.

Tutti Frutti is not as sweet as its title promises: it’s more robust than that. My favourites in the collection are the poems that take me to experience sensually exotic places and their inhabitants, and those that open into the confusing world of the child and adolescent boy as he frankly explores his feelings and his relationships with his family. It’s a substantial and promising debut for Konstandinos Mahoney as a poet.

‘Freeman Street, Grimsby’ by David Cooke is our Poem of the Week ►