Simon Armitage's walk: 'He had vaguely imagined a stroll along the beach'

by Diana Smith and Kevin Smith 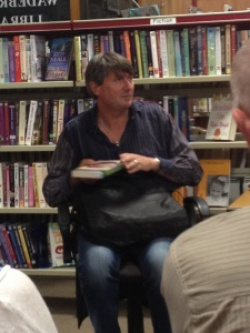 Simon Armitage is walking the South-West Coast Path, from Minehead to Land’s End, stopping off every evening to read a few of his poems and talk with his audience. He says he wants to test out his reputation as a writer, and “test out poetry’s reputation as well”. This involves “bartering” his way, paying with “poetry alone”.  Admission is free, but you are invited to make donations into a (clean) sock. He isn’t letting on how much he gets at each venue. But there’ll also be a book coming out of this tour, to follow up ‘Walking Home – Travels with a Troubadour’ about his 2010 walk along the Pennine Way.

One of his stops was at Wadebridge library in north Cornwall, a few miles inland from the coast path itself, true, but Simon said he was “really keen to read in a library”, especially with the current changes and threats to libraries across the country. At a Q and A session at the reading he was asked about his impressions of the coast path, compared to the Pennine Way. You don’t walk through clouds all the time, he thought, and it’s hard to get lost. The signposts are good and if you miss one, well, the sea is just over there. The scenery is staggering and he was surprised by the heights of the cliffs. He had vaguely imagined a stroll along the beach, but it was all up and down. You struggle up a stair-like path to the top and see it goes down immediately, and then up again. He is not tasting the local beers, being on the wagon for the duration.

At Wadebridge library mobile shelves on castors had been moved aside and about 40 chairs set out in five rows. Most of them were filled, with women making up two-thirds of the audience. He was introduced, and he took a photograph of us – he needed proof, he said, as his wife didn’t quite believe what he was doing. He spoke about walking the Pennine Way the “wrong way”, from the Scottish border south to his home village, Marsden, at the other end. “Never again,” he said, “because it was horrible.” The South West Coast Path is ‘Walking Away’ from home, but in a part of the country he didn’t know so well. He looked tired, but still engaged his listeners as skilfully as he does with audiences on TV and radio.

He book-ended the poems with stories and insights into how they came to be written. He spoke of the last Sex Pistols gig in Huddersfield, and how the site where Johnny Rotten sang his last note is now a Lidl before reading ‘The Clown Punk’, including the memorable line about the punk “towing a dog on a rope”. This was followed by ‘Beach Wedding’, where wedding parties appear on the beach at St Ives from the register office and hotel across the road, and ‘Road Show’, at the time of the 1999 total eclipse, when he and his heavily pregnant wife staggered up a steep hill in St Ives to get to a radio road show, arriving just as it finished.

‘Aviators’ from the Seeing Stars collection was inspired by a plane he was on being delayed by “technical difficulties”, which were resolved by a man going with what looked like a large lump hammer into the cockpit. He explained the cover of Seeing Stars, a poodle shaved to resemble a horse, and added that the book was a series of poodles shaved as horses.  It was written after he had finished his translation from Middle English of ‘Gawain and the Green Knight’, when he felt he needed to “splurge a bit” and “let phrase follow phrase, rather than count quatrains”.

He talked of developing confidence and independence through poetry, and how he couldn’t have imagined, as a teenager, ever standing in front of an audience like this. He couldn’t have written Seeing Stars when he was 25. Was poetry becoming more popular? He said he thought it would always be marginal: “Poetry is always coming and never arrives.” But perhaps this is unavoidable: “It’s not for everybody, you need to concentrate.”

There were two final poems. ‘Rain’ is a Stanza Stone work, carved into a rock between Marsden and Ilkley, deep enough to last 1,000 years. He wondered, with the change in language over time, what people would make of it 1,000 years hence.  ‘Yellow Rattle (Poverty)’ was a riff on the many names of this hay meadow plant, not generally beloved of farmers.

And that was that, apart from the signing of books that people had brought and the chat with the woman who lives a few miles further along the path and yes, she and anyone else would be welcome to join him as he walked. His full schedule is on his website.  It ends in a few days' time with a trip to the Isles of Scilly that will include an attempt to walk between islands at one of the lowest tides. This should provide a great finale to the journey, and to the succeeding book. We’re looking forward to reading it, and finding out which community was most generous in filling Simon’s sock.

We'll have to persuade him to the Pembrokeshire Coast Path next.

a wonderfully written, informative, evocative and entertaining piece of writing. Thank you.