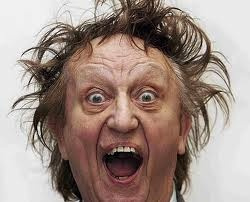 (How many "takes" at recording did I need for this?)

“But just one’s left” he sighed;

A puppy and its father,

His dog and Ken both cried

So now there’s just the man and dog

But time’s the greatest healer

So when their tears had dried

It needs to get a bride”.

So thus the two were married

It helped to heal the puppy’s wounds

She went the way of Dodd’s dog’s dad

He tried to keep it from the dog

Her body he would hide

Dodd’s dog though sensed the truth of it

Their souls to Heaven sped

To join Ken Dodd’s dad’s dog up there

No need for apologies, MC. Your observations are always welcome.

Actually, MC, this is not a re-post. This one is about Ken Dodd’s dog’s dad. The original was about Ken Dodd’s dad’s dog. (Original below).
An easy mistake to make!
https://www.writeoutloud.net/public/blogentry.php?blogentryid=20150

JC - a good one is always worth repeating.
The proof of that truth's in the woof!

Thank you, Kate and Alan.

Great fun. I can't say it out loud, my teeth won't let me!
They don't make things like that anymore.
(Oh Yes They Do!)

Doggedly goddam good, and made me laugh too.

You was supposed to say " No Doddy"
I was sure you'd be with me on that one.

About half a dozen, Po, and it's not perfect in the one I settled on.
It did, Kev. It was a chihuahuahuahua. A diddy dog.

JC 'How tickled I am' at re re reading this

This is excellent by Jove