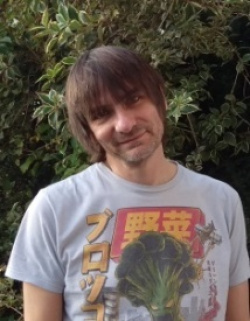 Beno describes himself as 'very new to reading and writing poetry'. His poem Scooter Club and the Lost Boys is still our poem of the week, though! It's a piece which pulses with energy. Read it and you'll see how he uses the narrator's voice to paint a vivid picture of a vanished youth. (note: it may not be for those who don't like strong language).

Below are Beno's responses to our Q&A. We hope you enjoy those every bit as much as his poem.

How long have you been writing poetry and what was your initial influence for doing so?

I've been writing for 18 months. I’ve read out my stuff to the girls at work and once at a poetry night.

Is there a particular style of poetry that you enjoy writing more than others, if so why?

I don't have a style yet. But I like writing poetry for girls. The more romantic, the better.

Have you ever performed your work, if so any advice for those still to do so?

I plan to read a poem at the poetry night in Wigtown in Scotland in January, and at the everyman in Liverpool in January also. I like JMH best but wolfgare told me to read Seamus Heaney, so i bought one of his books and I like him a lot, he's boss.  I also like sir Walter Raleigh's stuff, he was a proper dude! Christopher Marlow was pretty cool as well. And Shelley.

If you could only have one poetry book which one would it be?

The book is just called poems by Gerard Manley Hopkins. I used to work with a Jesuit priest turned nurse who love GMH and recommended him to me. I wonder if he still alive and reading wolf. He would be Uber proud of me. Sir Philip Sidney. He's proper good.

I would like my last meal to be with, my mum, my dad, my girlfriend, my best friend.

Scooter Club and the Lost Boys
by Beno

Talcum floors for soulers dancing, suited rude boys, killer skanking.
We’re off our heads us aging youths, with blood and sweat that’s hundred proof
With shit filled lungs and clogged up hearts, and cholesterol that’s off the chart,
We pogo, ruck and wreck the room, disgraceful sons of baby boom.
The world outside has travelled on, no angry youths spout sedition,
Just snowflake armies lie and melt. Control, delete, with button alt.

God saved the Queen, and London stands, the rebels driven from the land.
The concrete jungle’s fallen down, the tube is safe, in my ghost-town.
And Maggie’s dead, the fucking bitch, and London’s full of nouveau riche.
Do I give a fuck? I fuckin’ don’t, I doin’ coke and I don’t vote.
Fuck the left, and fuck the right, fuck it all, its fucking shite.
The boys and I don’t give a toss, so suck our dicks, and just fuck off!

A Gold Creative Future For Our Own Jade Cuttle! ►

A truly fabulous poem Beno I am sorry to have missed this one before. There is a real vivid richness about this one which I think would go down really well performed live.

Another word from me - if there is a nomination for 'Poem of the Year', I'll vote for this one!!
Cheers, Beno. keep going, you're on the right track.

Has a touch of the irony of Daltrey's 'hope I die before I get old.' Ahem.

Top stuff mate, took me back a bit, great rant great rhythm with some of my favourite music in there Beno! One of first poems I ever wrote was called Punks not Dead, its still at the very start of my profile, if you get chance to have a gander, enjoy all the best Jeffarama!

Thank you to everyone who posted comments.
Well done to Jennifer with her acute observational skills. I guess I don't have a particular style because it depends on which one of me is writing the poem that day. I was really drunk when I answered the Q and A's Jennifer. ?
Really like that you liked my poem Mr Braddock. Coz your work is very special and I am a great admirer of it.
Kate G your comment was very clever. I loved it.
Not sure what big Sal meant.
Thanks again Anya.
Mr Sherwood, I blushed after your comments.
Ray, I always enjoy your comments RE my work. It's great your enjoyed it. Made me proud of myself, which isn't normally my thing or objective but it felt nice.
And thank to everyone else. Lovely.
Beno.

Hi Beno, just thinking, the language you use in the Qs and As seems to have no relation to the beautiful words in Raven Beauty, for example, but neither to the gripping and brilliant 'heavy metal' use of words in Scooter Club?!!!!!

Well deserved Beno! Very clever. Liked Eolos very much too. Keep it up!

Take a pinch of poetry , mix with nostalgia, stir vigorously ,add some pepper until the eyes water and give yourself a badge of total competence and inspiration to portray the times you describe so well Beno. That period gave us hope at a big price. Congratulations, much deserved.

This shouted out POTW to me straight away for its vigour. You are almost there at the gigs with him! This poem couldn’t have been written without the expletives, it wouldn’t have been real.

congratulations on POTW Beno.
I missed this one so I'm glad of the second chance.

I loved the energy and drive of this. I found the language a bit fruity, and I don't think I would have been so bold to use so many expletives as that myself. but this is not a criticism. of course you should speak in your own voice, and this particular poem wouldn't have worked without those words included.

What a great organic poem, a ripe seed-pod bursting with poetry.

Don't know about the nouveau riches occupying London though, aren't they just the rich rich?

Nice one Beno. A poem with blood in its veins! Blow up the world, why not, it's all going to hell in a basket anyhow!
I love the way the rhymes drive it forward, be a great one for an open mic.
Takes me back nearly 70 years, believe it or not, to the climbing scene in the 50's and 60's when we were all on bikes to Lanberis Pass every Friday night, doing dangerous things and looking for girls.
Dark Manchester streets and Youth clubs and coffee bars. Go for it and keep on going!
PS, I like the 'snowflake armies' phrase - fair comment on today's Labour Party.

Anarchic with a hint of chaos. I felt like I was there.. going to have a hangover tomorrow. Very clever Beno.

Like the music references in the last stanza. This poem certainly packs a punch, and packs a lot in, too. Vibrant, rich.