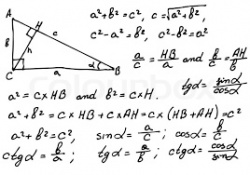 I first realised this mathematical fact

When I planned to purchase some tiles

Of course, I could have got various types

Of colours and sizes and styles.

I measured my floor up for area

And settled on 8 inches square

But this would require me to cut some tiles

Not an effective affair.

I then contemplated a different approach

After I’d studied a while

If I bought a different sized tile?

So supposing I used a different size

That’s shorter and longer on each of its sides

By an inch than the first one of mine.

Square, I hope you agree,

While the 7 by 9 could only manage

But what if I followed on with my plan

This is now shorter and longer by 2

So would it be smaller again?

(I’d need more of these for the floor)

The tile is reduced in area now

By a greater figure of 4.

Now already you’ll be ahead of me

And, sure enough, it’s happened again

And then I saw what was happening here

Just why I kept making these gaffs

It was clear enough as I measured the tiles

So I’ll try to explain it in maths.

When I varied the edges by just one inch

You recollect just how I fared?

The area lessened by just one inch –

The difference of one, and then squared.

On the second example the difference was 2

As at the equation I stared

The difference of 2, and then squared.

And, of course, when the difference was 3

The obvious truth at me glared

That difference of 3 and then squared.

So what had I just discovered here?

That a square made longer and shorter

Reduces in area and, in fact, is not

The same as you’d think it oughta!

Would they waste less but cost more?

And all of this thinking had made my head spin -

I think I shall carpet the floor.

MC, Don.
Thankyou. I was quite pleased with the mathematical revelation. It really did come to me as an inspiration. But I am the first to admit that the poetry is quite poor.
Still, that doesn’t seem to affect many POTWs. In any event, I'm confident I have pissed on my strawberries so far as that accolade is concerned!

JC I'm afraid MC is right
For despite regarding myself as quite clever
You drowned me with X,Y trigonometry
Thus as POTW 'twill be never ?

JC - this is far too clever to be Poem of the Week - sorry!
Sad in more than one way - almost "A Tile of Two Pities"!

I'm impressed you regard rubbish-writing an 'aspiration'
It's nothing which falls off the pen
It takes us great skill and careful thinking
Handed down through the ages by great men ?

Thanks for your thoughts, Trev.
I can’t fault the speed of bond of Gorilla glue, Ray. But maybe not for tiles.
I await a call from the Nobel Prize Committees for Mathematics and Literature. I shall be the first person ever to win two categories at the same time to come from Chapel Haddlesey.

What I like is that you made no mention of the setting time of glue - which would have really got us thinking John.
Seriously, some complex shit in here, to be stirred in until set. I am a bit of a DIYer, but despair at the number of heads on modern screws - I have the full range but never know which fits which until I have nearly stripped the head.

Let's form a club for God's sake. You could always try TOPP yourself Tiles.

Nothing wrong with rubbish, Don. I aspire to write it myself. Much more entertaining than much of the worthy navel gazing you read on here.

Both Brian and I we write rubbish
He up there, me down here, what?
Between us we rove round the website
Writing all rubbish and twat

Now don't get me wrong John I like Brian
Writing rubbish and twat is great fun
It might be beyond one's comprehension
But what will be done will be done
?

Or maybe not. Perhaps we have less time than we think. In which case I shall lie on my death-bed thinking “I wish I had written more shite like that”!

Thanks, Don and Brian. Clearly, all three of us are old men with more time on our hands than is good for us!

A tale
of toil
over tiles

They tried to keep track of your reasoning
Too much for them, they collapsed, dead, and broke
And ended up cluttering my cranium
In a dead-neuron pile smoldering smoke