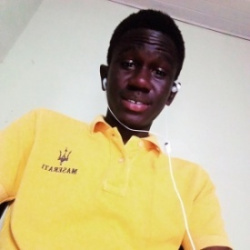 This week, we’ve chosen Purpose is Defeated, by Kphoro Vwede Daniel from Warri, in the Delta state of Nigeria. His poem holds a mirror up to the political situation in his country, and his answers to our Q&A are below...

What got you into writing poetry?
I get inspired by circumstances.

How long have you been writing?
I started three years ago.

Do you go to any poetry nights?
No, but I wish I could attend any , I will love to.

You are cast away on a desert island. What is your luxury?
A pen and a blank sheet of paper.

Long time ago, they left the  boundaries

Like an eagle from afar, they sight our mysteries

In the system, they saw mismanagement within

They robbed their way in

And the cycle continues circularly

We have formally forgotten those days

When virtues of peace were promoted with violence

When the press were oppressed

When justice was jeopardized

When our constitution was constrained to contempt without conscience

When the scales were afraid of scary blood, but love printed papers

When the beaks of singing parrots were broken

When religious teachers were treated rigorously

Our uniform men are well informed

But they are not well equipped

A great battalion with good  training

Against that without training

A great battalion with pieces of metal

Against that with powerful machines

Ready but not resourceful

No longer dying for the nation

Lets bring down those rebels

A call of duty to the north

They respond with gallant boots and courage

They respond with pieces of metal on their hands

They respond to a place where many have fallen

Even at that, they fought gallantly

They were made to improvise arms

They return with blood stained boots, hands and courage

Their faces and pieces of metal looking down

They have fought a good fight

But sorrow lurks around our families

Uncle died as one of them

Father retired as one of them

Pension still on attention, no ease?

They get recruited just for revenge

Where natural death is rare

People are on their way to kill

This is not normal!

Very well written I felt like I could almost see what you've seen.

I wish I knew more about Nigeria to fully appreciate this.

Well done Kporo. You seemed to have written about a fairly serious issue here with a good poem

Kporho,
Congratulations on being awarded Poem of the Week. Well deserved.
Keith

Congratulations Kporho. Hope you are able to read this.