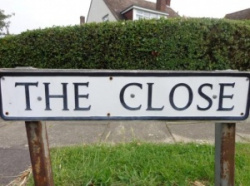 To the monstrous wagon

Mrs Ashall has seen a football fly over her neat hedges

Her unfortunate marigold’s yet again

Feeling the full force of the enthusiastically misguided article

Her side gate clinks open

To reveal this vengeful Northern warrior

Strands of grey hair falling from her neat bun

The ball is never seen again

Towards the end of the close

Roughly fastens the aquamarine scarf into a knot under her chin

Putting her arm through Bill’s

Tutting against the weather

As their daily walk begins

Carried on religiously by Bill

“ She was an alcoholic! You could smell it on her when she went in’t Co-op for her meat”

“And do you know when they carried her body out she was still lathered in make-up?!

Mascara all round her eyes!”

George from two doors away

Staggers in the light rain to the tree

On the small patch of grass opposite our house

That we’d pick on greener days

As he plays darts against the big oak tree

Taking his top off

Looking less like the sporting champion he thinks he is

Playing to the crowd

I once asked Mrs Butler, our neighbour, also known as Kathleen,

for a loaf of bread when I was about seven

“Here Jon, take this money and get us a loaf will you?

Kathleen knows which sort I have”

I thought she meant Mrs Butler

“Is your Mum alright Jon love? Here take this money back to her. I had a spare loaf in anyroad

Tell her I asked about her will  you?”

“ I meant Kathleen from ‘t Co-op! She shouted. Take this bloody loaf back you daft

what our John did?

Only asked Kathleen Butler next door for bread!”

I was never allowed to forget this episode for years to come.

The Co-op lady now, unmistakably also entrenched in my mind as Kathleen

Comforted by the sacred heart of Jesus on the chimney breast wall,

When her husband, aged forty, died

Suddenly in Morecambe bay on holiday.

The last supper, the stations of the cross

On the side walls

Surrounding her in her time of need

If she managed to walk to the local shop,

It was to return in tears,

One time breaking down when the Co-op Butcher

Harry, playfully made fun of her only wanting a one ounce slice of corned beef

“ Are ‘t’ havin a party Kathleen? Are tha sure tha wants so much?”

She retorted, like a woman possessed “ A party? Am I having a party?

I’m not having a bloody party Harry!! Me Husband’s dead!! That’s why I only want a one ounce

Collapsing on the way back

At the bottom end of the close,

Grief had completely taken hold of her

The glass bottle of sterilised milk

Smashing against the cracked grey pavement

Mingling with her tears

She’d had of growing old

Close by her side

Were forever the close’s black sheep

Old before his years

And unable to work

Because of a disability

“What happened to Tommy Dad?”

Thinking anyone who didn’t work

When he’d supposedly worked on a farm

The horrific incident maiming him for life

Quite reasonably I thought

This left  him unable to work for a living

Me Dad called it “lazy-itis!”

And discouraged me from associating with either Brenda or Elizabeth, the two underprivileged daughters

The immaculate privets of Number fifteen

More regal than the rest of the streets hedges

Three doors to our left

Hiding the lives of Mr and Mrs Brookes

Their only daughter Francesca

Away from the rest of the streets urchins

We must have seemed like the bash street kids in comparison

Although me Dad, predictably

Didnt take to them

“Their hedges will be nice,all ‘t’ money they’ve geet”

“ I know..well he does work for the trains!”

I never saw the link myself

Headed off, smiling, down the close every day

Before labouring tirelessly in the garden

“ Mrs Jones said can I help her to clean her silverware Dad?

My Sister relished assisting Mrs Jones at number one

And fried eggs for her trouble

“Mrs Jones has got black pepper in her kitchen. It’s nice on chips”

Our Christine enthusiastically extolling the virtues of the everyday accompaniment

As though it was a rare, unheard of spice

Set aside for the wealthy

“Our Christine wants bloody black pepper now hers had it at Mrs Jones!”

Aye and her keeps goin on about Mrs Jones’ shiny pans! Her’s geet shiny pans cos her doesn’t

A nicer woman you could never meet, Mrs Jones made bonfire toffee for the street’s kids on

November the fifth, Always asked about me Mum and Dad

This close was where

I learned to ride my first skateboard

By me Dad at the pit

An old piece of wood

With roller skates screwed into its underside

But it was a thing of wonder to me

In the kitchen sink

When they had an unwanted litter

Without blinking an eyelid

This close was where

An injured child would be made to drink whiskey and sugar

The supposed cure for all ills

Administered sage-like by the elderly lady opposite

We got our first telephone

Had a shared line

And was hand picked from a BT catalogue

This close was where me Mum

On a school outing to Derbyshire

With the day’s pocket money

Before placing it back

In pride of place on the pantry’s stone slab

Hoping I wouldn’t see the join

This close was where I listened

To Diana Ross on the radiogram

Learned the words to A Spoonful Of Sugar

From The Sound Of Music

And it was here I sat noiselessly

Listening to Mum and Dad talk about buying their own house

Nearer to the town centre

Secure in the knowledge I was with

The only person who understood me

Fascinated by the stars in the coal black sky

Yet aching inside knowing she’d soon be married

Feeling somehow that things would change

Wondering what would become of us all

Thanks to everyone who read, commented and liked The Close. I never intended to make it so lengthy and revisited it loads of times to edit and chop it down a bit.

I almost didn't put it on because of it's length but it's done now anyway. Cheers again everyone for taking the time out to read it.

What I love about this poem is the unashamed length. So often we rail against being too long or overwordy in the fear of perceived self-indulgence, both from the poet and his/her peers.
No such guilt on show here, oh no!
It's brilliant it's original it's long and all the better for it.
Thanks for being brave JBD, I would love to be in the audience for this one with a big bag of crisps and a sparkling water.

Great childhood recollections, I think most people would be able to recognise the characters in this piece.
Loved reading it, thanks for sharing.
Paul ?

Amazing work, all life is here, all the characters that make up a village, a community, an estate.
Recognised many of them, especially Mrs Ashall and Francesca.

Really enjoyed reading this - it almost makes me feel like I remember all these things myself. I love pictures you paint with your words in this poem.

Jon, you have surpassed yourself again with such a passion for the nostalgia of your youth. Its detail takes the reader back to his or her roots and helps us to re live those days; to be reminded of those long forgotten characters who were our friends and neighbours. Your attention to detail reveals an exceptional memory. Yet what comes off this page is an account of a happy and secure childhood. Thank you for this remarkable poem which enlivened my imagination and brought back those near halcyon days. Keith

Wow, that is quite a tale and a good snapshot of a neighborhood with all its characters and details that may be overlooked by someone just passing by.