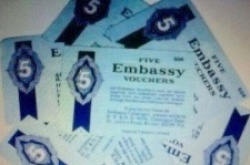 A very happy Christmas, and a fulfilling and rewarding New Year, from everyone on the Write Out Loud team!  Our Christmas Poem of the Week is ‘Embassy Christmas’ by Kevin.  It’s a remarkable tale of parental self-sacrifice at Christmas – don’t try this at home, folks! This is the second time Kevin has won Poem of the Week. He says he has been bitten by the poetry bug, and as for performing, “don’t be afraid to give it a bash.”

Is poetry an important part of your life and can you remember when and why it became so?

If you'd have asked me last year if poetry is important to me, I'd have said no. Up until the beginning of this year I'd never written a poem, and I had little interest in poetry. However, I've been bitten by the bug now, and poetry plays a big part of my life.

If you could only have one poet’s work to read (desert island book) which one would you choose and why?

The last time I was asked about my favourite poet I named John Cooper Clarke. I still enjoy his work, but since being compared to Marriott Edgar I've been reading quite a bit of his work. ‘The Lion and Albert’ is an absolute must.

Do you think your poetry style has changed since you started writing?

I don't think my style has changed much, but I think I have improved as I gain confidence. I did post a villanelle, which was a complete change from my usual stuff.

Do you perform your work and if so, what advice would you give to poets just starting out? If you don’t perform would you like to in the future?

I do perform once a month in the Doncaster Brewery and Tap. I don't think I qualify to offer others advice, as performing is not my strong point (here's a link to me performing so you can see what I mean! https://www.facebook.com/donnybrewery/videos/1539975492755844). All I would say is, don't be afraid to give it a bash.

Do you perform your work and if so, what advice would you give to poets just starting out? If you don’t perform, would you like to in the future?

I get inspiration from all types of sources. People need to be careful what they say in front of me, in case it ends up in a poem.

It was Christmas Eve in seventy-three

And Ezra did t’shoppin’ that year

He’d filled the cupboard, and every shelf

With ciggies and whiskey and beer

He bought enough snap to feed an army

Not just their family of four

He had to cut t’legs off the turkey

Just to fit it in through the front door

Enough booze to sink a battleship

Surprised what he’d got for his cash

He felt smug and pleased and elated

As he sat down to survey his stash

It was then that Mags asked the question

As she eyed up the booze and the likes

She said “What have you bought for the children?”

“I thought you were buying ‘em bikes”

“I forgot that was my job this year”

“And now I’ve just blown all me money”

“On ciggies, and whiskey and beer”

So now he was skint, and with prezzies to buy

With no one from whom he could borrow

And only one day left, to buy the kids bikes

Because Christmas day was tomorrow

Now in them days, when you bought cigs

You got a voucher inside every packet

To try to get you to smoke more

And kept t’vouchers, in a big tin

So they looked in the Embassy catalogue

Ezra flicked through the catalogue

And Mags joined in, for a look

And they came across two gleaming choppers

On the very last page of the book

Which didn’t sound such a lot

So Ezra counted his vouchers

To see just how many he’d got

And then they were checked by their Mags

And still he was one hundred vouchers short

Which equated to four hundred fags

“I’m sure I can smoke that by closing time”

“To get t’vouchers, and purchase the bikes”

He put two cigs in his mouth, and lit ‘em

And gave ‘em the deepest of drags

And timed himself as he smoked ‘em

To work out the rate for two fags

Too slow, he tried four fags next time

And then he tried six and then eight

His mouth couldn’t hold any more fags than that

So that was his maximum rate

Still he was too slow, and waning

He’d two hundred cigs left, and only one hour

Which was really too much of an ask

Then Mags came up with an idea

She produced an old china teapot

And she broke up the last of the ciggies

And filled it, tut’ rim, with the lot

Then Ezra worked out what was ‘appenin’

He put his lips up to the spout

Then lit the lot, and took a big drag

And held it, before breathing out

Two hundred fags, in just half an ‘our

To buy the bikes, to give to his nippers

Success, and Ezra purchased the bikes

Which the kids were so glad to receive

And under the tree, was a prezzie for Ezra

◄ On Trust: A Book of Lies, James Womack, Carcanet

Thanks Martin. I'm going to have to think about this cartoon idea.

I totally agree with Colin and Hannah with this one Kevin, it definitely as that admirable cartoon like quality to it. I certainly remember my parents collecting those embassy tokens before they eventually gave up smoking. I remember they had enough to get a monopoly board.
Marvellous Kevin
well done on POTW

Thanks Jon & Graham. I was a bit worried that no one would remember the vouchers, and that this one would fall flat.
Cheers Kevin

Well done on POTW KJ
It reminds me of my friend's parents who used to have stacks of Kensitas vouchers in rubber bands on the mantlepiece. Smoking themselves to an early grave

Great stuff Kevin....well done on POTW. Love this. Love the use of local language...plus it's all really well put together.
I think when I was a kid me Mum bought stuff with Co-op vouchers like school shoes and furniture. Beltin' title too !

Thanks Hannah and Colin. I can imagine some of my poems in a book. Not as a cartoon strip, but with a cartoon accompanying each story. Maybe something a bit in the style of Quentin Blake.

Glad you enjoyed it.
Thanks Kevin.

I agree with Hannah about this reading like a cartoon without pictures. Do you know of any cartoon illustrators Kevin? You could be on to something! Love the 'kipper' line btw. And well done for bagging the prestigious Christmas POTW slot. I look forward to more in the New Year. All the best. Colin.

Phew ! Love this style, like a cartoon without pictures.
Brilliant !
Happy Christmas !