On Trust: A Book of Lies, James Womack, Carcanet 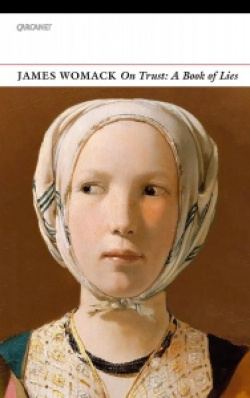 Just as fiction, I don’t really find the fictitious love affair narrated in the first part of On Trust sensational enough, a little too like a real love affair, mostly of interest to the participants, but there is plenty to delight and charm elsewhere in the book.

Womack is able to combine playfulness and the heartfelt in lightning-flash changes of tone and register that sometimes remind one of Ashbery: “Whoever looked into a mirror drunk/had for a moment to see that flicker-/the hovering ghost of truth/silent between him and the reflection-/that even the exact copy is untrustworthy;/someone else’s eyes, you’re imitating yourself./But what do I know? Look, Friday was crazy-/Now: the clouds like dumplings in a soup-blue sky.”

There are some very successful relationship/existential poems like ‘Glass Half Dark’ where “The coin falls on its edge, if it falls at all”, ‘Dust and Apples’, about a marital row, which ends with a gift of “weightless’ apples” and some touching ones about children, and ‘Storm’, about another row, which seems to end when “the refrigerator cries and gurgles/like someone else’s child.”

My two favourite poems come relatively late in the book: ‘For a Brother’, a deep meditation on the ocean that throws up sudden lines like “You’ll notice I never write about my parents” and “at times I have thought/the word was breathing”; and ‘Fireworks in Zakkamensk’, a traveller’s tale and a tale of friendship, perhaps summed up in the line “we drove the uncanny valley looking for shamans.”

An impish humour percolates through the book in asides and squibs, which reaches its nadir in a cod translation of a lovely Rilke lyric - Rilke as fratboy. Why? But this is a very interesting and various collection.

◄ 'Slim as an eel but a solitary glider, a pilot without bombs or weapons'