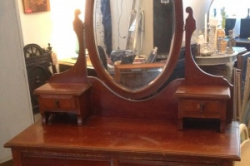 The new Write Out Loud Poem of the Week is ‘The Dresser’ by Jon Darby. He said of the poem: “I started with the item of furniture in mind and by the time the piece was finished I was in tears.” Jon added that he loved Write Out Loud, “and the way that anyone can post, give feedback to others and get helpful comments, advice, and even friendship. It's only through the advice of a member on here for example, that I've started to post a bit more regularly, as I had a bit of a slump in the past couple of years.”  His favourite poem is Philip Larkin’s ‘The Whitsun Weddings’.

Probably my dad got me into writing poetry. He worked in the pit and used to go around there and at home quoting from I Wandered Lonely As A Cloud by William Wordsworth. Another he always quoted from constantly was ‘Abou Ben Adhem’ (who in real life was a Muslim mystic) by a poet called Leigh Hunt (about someone finding favour with God by loving his fellow men which was to love God.) The vivid way he used to perform the pieces has always stuck with me, and I think that my fascination with words springs from his influence somewhere along the line.

How long have you been writing poetry?

My first poem that I can remember was written for Bonfire night at school, aged eight or thereabouts. It was called A Guy Am I. My dad still has it! I first started writing poetry a bit more seriously when I attended the Tudor House open mic nights in Wigan , probably from about 2010 up until 2014 when the venue closed, but I've always been fascinated by words and language.

Do you go to any open mic nights?

This year I've started again to go more regularly to open mic nights after a lengthy break – namely, Working Title, in Lancaster, run by Big Charlie. It's a great venue and there's loads of different poets there. A very accepting evening, run with enthusiasm and passion. I've also recently started to go to Pub Poets in Blackpool, another great night.

Even though I'm reading quite a lot of newer poetry these days, my favourite poem has to be ‘The Whitsun Weddings’ by Philip Larkin. The sense of nostalgia, the emotions and its ability to make me feel I'm right there in the thick of the narrative never fails to amaze me.

You're cast away on a desert island ... what's your luxury?

My luxury on a desert island would have to be music because I can't function for very long without it - and a hut filled with poetry collections and Alan Bennett's monologues.

From the front at least

Telling of a former

One at each side

From opening and closing

Snaps from Blackpool and Wales

Are slotted around the mirror

The wind is behind them

A huge grin across her’s

Especially in the ones photographed together

Walking down the seafront promenade

Completely dependent on each other

With no nonsense rolled- up arms

One of the bigger drawers beneath

Is guardian to documents

A paperback edition of the new testament

Given to me Mum

When she began her journey of faith

Searching for peace from panic attacks

Putting up it’s iron bars in front of the doors

Keeping her a prisoner

With the emphasis I suppose on the hope of personal change

"When someone becomes a Christian He is not the same anymore

A new life has begun "

"Is your Mum ok John? Give her this will you love?”

I dropped it in a puddle on the way home

A permanent reminder of my carelessness

I stare into the oval mirror

Now liver spotted around the edges

Tired of the reflections it has held

She’s draped her red chiffon scarf over it

I can still smell the perfume she used

Her only foray into worldly pleasures

It could have been used by Elizabeth Taylor

Such was it’s beauty

To me at least

A good twenty minutes or so after he was ready

Her skin faintly blushing beneath the rouge

Cheeks apple red like the scarf around her neck

“ get out of it you daft bugger” Her usual response

A couple of Avon varieties

The fancy glass potion like bottles developing a layer of dust

Aching to be wiped away

Gesticulating with his hands

I lie back on the bed

Mocking the plain wood elsewhere in the room

I could be anywhere

In the South of France

Relaxing in a chateaux

Taking a rest before the evening meal

But this is my Parents bedroom

In their red brick terraced house

The first And last House that’s theirs

Their union too strong

Even for the grave

A packet of unworn tights on the white painted chair

This is where I go to

When life gets too much

When my eyes sting tears of inferiority

And low self esteem drags me down

I relax in it’s embrace

My place of escape

Jon, when I first saw the title I honestly anticipated a poem about the theatre. I thought the UK used 'bureau' or just 'drawers'. Like yourself, I grew up with 'dresser' in Canada and still use that word without hesitation.

Adjusting to local terms is always a fun journey. I don't call a tunic a 'jumper' anymore; although I find it hard to call a pullover sweater a 'jumper'. But I'm getting better with each passing year, and hard graft. 'Supper' has almost disappeared from my vocabulary. Unless I join the set who dine at 11:00 P.M. Ha!!! Not likely! (I do have that correct, don't I? Regional language is a bloomin' minefield!)

As I have previously said it is a amazing what memories can be evoked from a piece of furniture.
Well done Jon this is indeed a well deserved POTW
such rich writing
nice one

I just wanted to say thanks to all of you for your kind remarks on The Dresser and to Write Out Loud for the nomination which I never expected. The piece means a lot to me personally, and to receive such comments from Poets far more gifted than myself is a huge honour.
Thanks once again
Jon

Hi Jon, the more I read this poem the more I get from it. That to me is the sign of a good poem.

All the best des

For me one of the best poet's around. John's words are like textures and grain in wood, opening or cracking the oak few are able to carve and truly emote the inanimate like what's given here. We are often in your shadow but happy to be there.
Great words

Beautiful poetry, stunning, so rich in detail.
I could see the photos of the mum and dad, smell the long ago perfumes.
The history of a family in a piece of furniture.
So deserving of POTW.

Congratulations on POTW Jon and thanks for taking the time to respond to the Q&A's, a feature which many of us look forward to reading each week. It doesn't take much time and effort for members to acknowledge and reciprocate the likes, comments and accolades left for them so it is good to see you have broken the silence of the previous two weeks!

And this is such a good poem, one which I very much enjoyed reading earlier in the week. All the best. Colin.

Truly beautiful full of love and adoration for mum and dad i sense the comfort you get from those treasured memories stored and hidden away deep in your thoughts and then revealed to us your readers glimpsing into your intimate memories love this poem so touching loved the line...
Its womb like hold.
Keep on reminiscing x
Christine x

Well deserved POTW Jon. ?
Love the way your poem draws you in with the dresser and then takes you on a journey through your childhood.
Well done!
Paul

I'm so pleased you got this POTW Jon especially being that you're so receptive and open minded on here. This poem must have hit a nerve with lots of us. It is very hard to separate ourselves from treasured furniture at the end of a life, and to watch especially as men in vans tacitly cart them off. Heartbreaking stuff.

Probing and honest. The detail is delightful. It is amazing how a single piece of furniture can encapsulate so much, but it truly can.