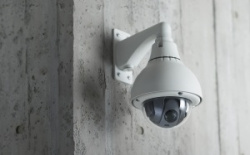 The new Write Out Loud Poem of the Week is ‘CCTV’ by Tony Hill. He said of the poem that the intent was to “give a voice an authoritarian and menacing presence”, adding: “The idea for the poem came, not surprisingly, from watching my own CCTV, a system I had installed following a break-in several years ago. The system's primary function now is to allow me to monitor the whereabouts of my cat, Audrey, and occasionally to provide inspiration for poetry.” It is the second time that Tony has won Poem of the Week; the first occasion was almost exactly a year ago.

Can you give a little background to the poem and how you came to write it?

I'm very pleased that CCTV has been chosen as Write Out Loud's Poem of the Week, especially as I have only just begun to post poems again after a lengthy absence. My posting style is best described as guerrilla, a brief incursion to post a few poems before retreating again into anonymity. The poem, with its political undertones, represents something of a departure from my usual offerings in terms of both style and content. If you compare 'CCTV' to ‘Skimmers’, the only other poem I've posted on this visit to the site, you'll notice that the language is less figurative and the rhythms more conversational, which seemed appropriate as I was trying to give a voice an authoritarian and menacing presence. The idea for the poem came, not surprisingly, from watching my own CCTV, a system I had installed following a break-in several years ago. The system's primary function now is to allow me to monitor the whereabouts of my cat, Audrey, and occasionally to provide inspiration for poetry. The white spiders are very real.

How has your poetry developed over the time you have been writing?  Do you attend any writing groups or workshops?

As far as my poetic development is concerned, since retiring from teaching I now have more time to concentrate on poetry. I write this with a slightly heavy heart as the writing process itself affords me no pleasure whatsoever. This may represent a heresy to some Write Out Loud contributors, but it's the truth as far as I'm concerned. There's a brief moment of satisfaction when a poem is finally complete, but I quickly begin to brood on some other idea that has come to mind. I don't submit my poems to magazines, or enter competitions, or attend poetry readings, and any activity that involves a "workshop" is one I will studiously avoid.

Did you do anything to celebrate National Poetry Day last Thursday (28 September)?

To my eternal shame, I have to admit that I didn't realise last Thursday was National Poetry Day. There is, however, every likelihood that at some point during the course of the day I would have read a poem or two, an act which must serve as my meagre contribution to the festivities.

If you could invite four poets (living or dead) to tea, who would they be?

If only to observe the interesting dynamics, I'd invite Ted and Sylvia to my literary soirée. The monumental presence of TS Eliot would ensure things didn't get too feisty. Of poets alive and kicking, an invite would go out to Alice Oswald.

The God I know would have it this way,
if he could, the world at one remove,
observable from every angle, four-square,
with no one, not even yourself, above
suspicion, or out of reach. The flowers twitch
nervously. They know they are being watched.

I have made appointments. The cat is Beria.
I watch her carry out interrogations
on sparrows down to the last morsel,
for which she shall receive food and medals
in due course. No one complains anymore,
understanding the need to take precautions.

I have decided to be robust in all measures,
knowing clear borders make good neighbours.
Dogs help, too. You might think otherwise,
and therefore are likely to believe that clouds
are innocent, but I have seen them collude,
seen them tainted by sunset and association.

You know, of course, the ivy is listening,
and that no van passes without my knowing,
and that I am recording twenty four seven
and all for your benefit. Any change of scene
will be duly noted. I can zoom in on any spot.
Should a linnet flinch, I will know of it.

I have night visions, too – a midsummer sleet
of bloodless moths, a blizzard of ephemera,
and, worst of all, the spiders, white gaslit
horrors that shroud my eyes with gossamer
as if to blind me, as if I were already dead
behind these walls, like snow in a prison yard.

Hi Tony. I do like the mixture of paranoia and menace which sits so well with the neat borders. Your cat is a familiar, I think. Excellent poem.

Excellent poem Tony. It definitely has a very strong undercurrent of suspicion and paranoia. I liked the image of the flowers twitching nervously and the second stanza is particularly dark. It's what is suggested rather than spelt out, of course, that makes it powerful. Also, great last line.

A splendid poem Tony . I love the whole idea of the ivy listening. As ray says there is definitely something Orwellian about CCTV and how all those images are used in public sites that are a definite mixed blessing.

The fact that I feel 'squirmy' after reading this poem must say volumes about its construction and intended effect. I'm glad it's here, because I missed it earlier. Congratulations.

Thank you for your 'poetic honesty' about 'linnets' and 'flinch' Yes! A craftsman works.

Congrats on POTW Tony - good to see another 'Hill' poet headlining the WoL front pages. And good also to be prompted to read this excellent poem once more. I'm also jealous of the fact you have linnets visiting your garden. Lucky you! All the best, Colin.

dense, wonderful writing tony as ever. i am but a linnet flinching compared to your resplendent peacock of poetry.

Hello Tony, I really enjoyed 'CCTV' and the 24/7 invisible eye tour of your immediate neighbourhood! I especially liked the parallel comparison between God and the camera, seeing "the world at one remove, observable from every angle," and there's the hint of the authoritarian 'big brother is watching' scenario, which, to me, is wrapped up with perfect menace and the suggestion of no escape, in the last two lines "as if I were already dead behind these walls, like snow in a prison yard."

I am relieved to learn that I am not the only one who finds the process of writing poetry frustrating and unenjoyable. Its like a 1000 piece jigsaw to me! Once you start, (and oh, the idea has formed, so you have no choice but to find the first line!) you get no satisfaction until its all finished! CCTV must have given you great satisfaction in the end Tony, and I am glad that it has earned Poem of the Week. Its fab! Anna.

Good to see you here Tony. You have been lifted up on the shoulders of unknown admirers. I can only repeat what I always say, that you have a wonderful style, and in this poem we see through the animated eye of the camera in its Orwellian role . Lots of heavy implications come with it. Thoroughly engrossing. I still treasure the football poem, and I don't even follow the game!

Congratulations, Tony. You may be only an occasional visitor here, but your contributions are always valued. A serious poetic craftsman.