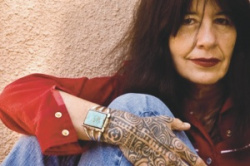 The National Poetry Library at the Southbank Centre in London marked National Poetry Day by launching  a project to collect and preserve poems in endangered languages - and has commissioned four poets to write new poems in languages under threat or lost to them personally.

According to Unesco, over half of the 7,000 languages spoken in the world are endangered, with languages dying at the rate of one every two weeks. Their figures estimate that by the end of the century, half the world’s current languages will be lost which will also mean the loss of poetic traditions. Members of the public are invited to submit a well-known poem in a language that is endangered or under threat, according to the Unesco map of endangered languages.

The National Poetry Library will collect these poems in both written and audio formats for their archives with the aim of preserving at least one poem in each language it receives. The library will work with Dr Mandana Seyfeddinipur, Head of the Endangered Languages Archive at SOAS, and translator-in-residence Stephen Watts to preserve the poems in both their original language and in English.

To launch the project, the Southbank Centre is also commissioning four internationally-renowned poets to write new poems in languages under threat or which have been lost to them personally through displacement or circumstance.

Joy Harjo, pictured, a member of the Mvskoke (Creek) nation will write a poem in the endangered language Mvskoke; Northern Irish poet Gearóid Mac Lochlainn will write in Irish Gaelic, a language classed as “minority” in Northern Ireland; Iraqi poet Nineb Lamassu will write in Assyrian, a language not officially recognised in Iraq; and Ugandan poet Nick Makoha – shortlisted for this year’s Forward prize for best first collection - will write in his mother tongue, Luganda, a language he lost when he was forced to flee Idi Amin’s dictatorship as a boy.

These poems will receive their world premiere performance by the poets at a free event on Saturday 14 October, Seven Thousand Words for Human, as part of Southbank Centre’s Poetry International festival which this year celebrates its 50th anniversary. Founded by former poet laureate Ted Hughes in 1967, Poetry International 2017 will also showcase a number of the poems submitted by the general public in a special exhibition of endangered poetry at the National Poetry Library.

Chris McCabe, of the National Poetry Library, said: “We're launching the Endangered Poetry Project with the aim of holding on to as much poetry as we can for future generations to hear, read, translate, enjoy and pass on to other people. Who can imagine a world without classics such as Beowulf and the Odyssey that were written in languages that people no longer speak? We're calling out to people everywhere to send us the poems they know so future readers can enjoy them just as much as they do.”

Visit www.southbankcentre.co.uk/endangered-poetry for more information on how to submit a poem to Southbank Centre’s National Poetry Library for inclusion in its Endangered Poetry Project.

this seems like something to know and seven thousand words is huge and according to https://charactercount.online the number of characters will be almost 25000's if thee words are 7000.

Posterity will surely be the beneficiary of this far-sighted
idea. And how appropriate that it should be in the capital
city of the country whose own language has supplanted
so many others to become the lingua franca of the world.