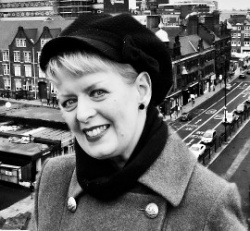 Catherine Graham has won the Jo Cox poetry prize organised by Carers UK for her poem ‘The Washing Machine’. The award for poems exploring loneliness was launched in honour of the former Batley and Spen MP’s work in tackling isolation. Carers and former carers were invited to contribute poems for the award as part of Carers UK’s creative writing and photography competition. The poems were picked by poet Cheryl Moskowitz. Highly commended were Louise Smithy, Bryony Littlefair, Jack Houston, and Lorna O’Connell.

The Jo Cox Commission on Loneliness, launched in January this year following Cox’s murder during the EU referendum campaign last year, has seen MPs and leading organisations come together. Research released by Carers UK found that eight in 10 (81%) carers felt “lonely or isolated” and a third (29%) felt “uncomfortable” discussing their responsibilities with friends or family.

Catherine said: “I'm delighted and humbled beyond words to win the Jo Cox poetry prize after all Jo Cox has done to support the lonely in society. When I read about Carers UK running a competition for poems on the theme of being a carer and the loneliness and isolation that carers can often feel, I knew I had to enter.

“As a carer, you don’t have to be alone to feel lonely. My winning poem ‘The Washing Machine’ was inspired by caring for my mother Doris for 10 years until she passed away last November. I so wish I could have told her that we'd won this wonderful award and I know that she would have been proud of me - but I can almost hear what she would say to me in her canny Tyneside voice, 'You've won? I hope this one rhymes.' “

Catherine Graham grew up in Newcastle on Tyne where she still lives. Her awards include a Northern Voices poetry award. Her first full collection, Things I Will Put In My Mother’s Pocket, was published by Indigo Dreams in 2013. Other publications have been Signs (2011) and Like a Fish out of Batter (2016).