Competition closes in 24 days, 17 hours. Get details and Enter. 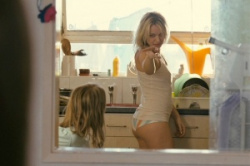 The new Write Out Loud poem of the Week is ‘at the sink’ by Colin Hill. The poem is based on an image from the 2009 British film ‘Fish Tank’ – and in the Q&As below Colin explains that he uses pictures and images from various sources as reference points for characters, locations and objects in poetry and prose. It is the second time that one of his poems has been named Poem of the Week. Colin is also a keen and supportive commenter on other people's poems on Write Out Loud  - and he has interesting views on that subject, too.

Would you like to talk about the background to this poem?

As some here in the Write Out Loud community already know, I have been working on a novel these past months. Just a couple of weeks ago I handed it over to a friend to read through and make suggestions. At the time I said it felt weird to finally let go of something that I had invested so much of myself and my time in. She replied, like taking off all your clothes and walking down the high street? Yes, I said, exactly like that. Anyway, that left me in a slight dilemma because I am now waiting for the book's return, knowing that it will need some further work before passing on to the next person for extra editing.

So I was reluctant to start on the next project, a novel which I have about 17k words already written but which has a plot not yet fully developed. I decided this week to go ahead regardless and started editing what was already done and working on plot development. Part of my writing process is to collect pictures and images from various sources to use as reference points for characters, locations, objects. I had saved an image taken from the film 'Fish Tank' (2009) of the mother pointing her finger at her daughter. That became my first line but I didn't want to write about the film as such, just the striking image of her pointing. And I wanted it to be more about the description and not about the person that she was pointing at. In my mind that person could have been anyone: husband, lover, son, daughter. I very much wanted the reader to continue the story and add their own interpretation.

It's fair to describe you as a strong supporter of Write Out Loud - you take the time to comment a lot on other people's work here, for instance. What is it about this site that you like - and where do you think we could do better?

I dropped out of education quite early, only managing a month or two of A-levels. By today's standards my old comp would have been classed as failing but there were no such safeguards in place back then and you either struggled through or left, went on the dole or got a job. I went on the dole and had a succession of jobs. It was a shame in some respects as literature and art were and still are my greatest passions but even those fell by the wayside as family life took over and I ended up becoming a full-time, stay at home dad. But as the kids became more independent I found I desperately needed to find my place again and it was to writing that I turned.

Write Out Loud and its incredibly diverse community of writers from all over the world have been very supportive and encouraging over these past couple of years and I have learned an awful lot from reading and studying the work posted here - the standard of writing can be phenomenal. Feedback and comments I have received have always been very much appreciated. We all need a good pat on the back but I think we can all play a stronger role in offering carefully considered critique about each other's work. I don't mean pointing out the odd spelling mistake which is not that important, but more in the way of structure, themes, content, word choice, repetition. There are a few brave souls who already do this but not many.

However, it is obvious that many people do not wish to receive critique which is fine and I don't have a problem with that. Write Out Loud has to work on all levels and for some it is the sharing which is most important. I suggested in a comment recently that perhaps we could have some sort of flag system by each of our poems to denote that the writer is happy to receive critique and thereby reduce the possibility of causing offence. Also, the Poetry Review section in Discussion Groups never seems to attract much attention, despite some people offering work for opinion. I believe the site is at its most vibrant and exciting when there is a good flow of friendly comments being spread around.

Are there any new poets that have come to your attention in the last year or so, that you are enthusiastic about?

Yes, quite a few although poets come and go so it is difficult to judge how serious some of them truly are about their writing. I think it would be unfair to name names but if I find a connection with a piece of writing I will always show my enthusiasm and for reasons described above I will always offer my encouragement. I am particularly attracted to poems that come at their subject matter from unusual angles. We often write about our own personal experiences and emotions but this can also be very effective when put into a third person context. Mix it up and experiment.

Are you planning to take part in National Poetry Day on Thursday?

By coincidence I will be at Brown's Hotel in Laugharne on Thursday for the monthly Poems and Pints with guest poet Oliver James Lomax, who is from Bolton. Brown's is steeped in literary history as it was Dylan Thomas's watering hole when he lived at the boathouse just down the road. No idea what I will read but Ray pointed out that my crap poem written in a supermarket car park might go down well at a live reading so it will be dedicated to him on Thursday in the presence of Dylan Thomas's ghostly watchful spirit.

I would just like to add my sincere thanks to all the Write Out Loud team and to everyone who has helped and encouraged me to write and improve what I write. I really am very much in your debt. And apologies if I have waffled but this has been a slightly hurried response to the Q&A after spending the day driving up and down motorways to university open days. Time to sign off. Cheers, Col.

◄ We're sorry about the access problems on Friday

Hi Lyrical Lexa and thank you - seeing your comment made me smile after a busy day. C?L

thank you Anna, I'm glad you enjoyed. Check out the film if you get chance. All the best, Colin.

I haven't seen the film behind the inspiration for this poem, but the stanzas contain vivid imagery and I love the feel of the underlying explosive tension. Poem of the Week for sure! Anna.

Not long now Graham and the knickers will be off ?

I for one will be glad to see the back of this POTW as those knickers have been distracting me all week! ?

how lovely to find your comment here Cynthia after coming in from a very busy day. I would apply the same sentiment to your good self as I love reading your comments to other poets here on WoL - they are always so full of enthusiasm and good advice. Thank you for your continued support. Colin.

Congratulations, Colin. Keep on writing. And commenting. People like you are the soul of this site.

thank you Paul, your continued support is very much valued. See ya around the net buddy. C?L

C?L, Congratulations, worthy winner of POTW. Another crafted, creative and cheeky ? piece of writing from that inventive mine of a mind of yours.

thank you Stu, those are very kind and generous words indeed. All the best to you. Col.

a fine choice and you come across as a genuinely caring bloke who just loves writing and reading. and lets face it, the world could do with a few more of them.

thank you Mr Old / New / Warn Out Shoes - I do love the way your name is so interchangeable (depending on your mood?) Buttocks and bacon? You make me sound like I'm a cannibal! Hope all is well in your neck of the woods. All the best, Col.

Colin, Colin, Colin, I really don't know what to say. but you are a pretty swell dude. and if I knew anything about real poetry, I'd critique the hell out or you right now. you always strike the feeling in your work. and on a personal note; I have always said the two best things in life are boobs and bacon. But in your case it looks like it's buttocks and bacon.

Warn Out Shoes, OUT!

Thank you all very much for your kind words. I hadn't realised I'd written so much in answer to the questions - it seemed less in the email but more on here!

Jonathan, I like the comparison. And I like British social dramas. I think Fish Tank fits into that category well enough.

Oh! By the way, in V1 I would have said knickers not panties, we're British ?

Colin, we had visitors last weekend and I missed this as it got buried quickly in the prolific blog section in just a couple of days. Thank goodness POTW has pulled it out for further appraisal.

The really clever bit in this is how it passes back and forth from narration into personal involvement.

As usual you've crept up on a subject and kidnapped it.

A sense of justice with this choice, as you have a pioneering quality that always brings an edge to your work - there must be peaks Col. Congratulations. I am so chuffed about the live reading - while you draw breath in Laugharne I'll be in Waterstones in Guildford fanning the flames of enthusiasm over a hot coffee!

All the very best to you. Ray

congratulations Colin on POTW. no-one deserves it more than you, not only for the great work that you post, but also the way that you encourage others with your well thought out comments.
in your Q&A you talk about the WOL community. I like to think that that is what we are, but only because of the generosity of yourself and others like you.
thanks Kevin

Congratulations Colin,on poem of the week. You do write really good poetry and have been an encouragement to me.I appreciate your comments as I am sure many others do. ?

Love this one Col. There is as you say a kind of unspoken knowingness between the unseen figure that she is pointing at her and the daughter has no idea what went on the night before. Congratulations on POTW mate