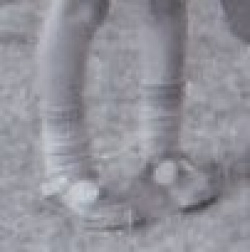 The new Write Out Loud Poem of the Week is ‘A Tale of Two Sandals’ by Paul Waring, a retired clinical psychologist who, his profile tells us, was once a menswear designer and also, during the 1980s, a singer-songwriter in several Liverpool bands. It is the second time that Paul has been picked for Poem of the Week. In his responses to our new set of questions he reveals that he began to write poetry every day shortly after logging on to Write Out Loud. He recently performed his poetry for the first time, at the end of Llandudno pier.

How does it feel to be nominated for POTW a second time?

Shocked! But delighted by the totally unexpected news - my first nomination for POTW was at the end of January, which seems very little time ago.

Has Write Out Loud changed your perception of poetry/ your own work? If so, how?

Definitely, yes. I wrote my first poem in 20 years last December and then joined Write Out Loud. At first I saw poetry as a fun hobby but soon felt so encouraged by the helpful feedback from poets here that I began to write every day. I learned so much from the variety of poems posted from different parts of the world and was taken by the quality of writing, from many who have been part of this community for years. However, the more poetry I read the more I realised how little I knew about technique, form, structure, editing, etc. and became interested in studying poetry as a means to write better and develop a style of my own. In the past three months I have taken two online courses with Poetry Kit and benefitted so much from having the poet Jim Bennett as tutor that I have now had some poems published.

Have you performed your work since you last won Poem of the Week?

Just once, at the end of Llandudno pier last weekend, at an event organised by the editors of Prole and Picaroon Poetry. I went along with absolutely no intention of reading, I just wanted to learn from the established poets who were there. However, when everyone who was scheduled to read had done so, the organiser asked if anybody else would like to read. Someone I’d only met that afternoon egged me on and, without thinking, I blurted out “OK, I’ll read if you want me to.” After what seemed like an eternity trying to find a poem on my iPad and wondering what on earth I’d let myself in for, I broke my duck - and enjoyed it so much that I later took part in a read-around and read three more! I’ve caught the bug now and want to perform more. One of the many things I enjoyed about performing was being with fellow poets - a welcome change after spending so much time writing alone. I’ve since been invited to read at a few other events.

You're in a world with no financial pressures or responsibilities. What do you do?

Here are three things I imagine might happen … .firstly, thank the financial fairy godmother for saving me from all those nasty debts. Secondly, enjoy the freedom to live life without a care and write all day uninterrupted. Churn out collection after collection of poems (that my agent ruthlessly promotes to ensure they become bestsellers!). And, once this has happened, loaf about in trendy coffee shops pretending to be busy writing and hoping everyone has spotted the celebrity in their midst! Thirdly, worry overtime that this is all a dream!

Do you have another blog or a website that we could link to?

I do have a blog: https://waringwords.wordpress.com

A TALE OF TWO SANDALS

worlds away from the flat above shops

Away from bone-dry August air

by broken teeth of war-bombed buildings.

Nan bought sandals from a man wearing a turban.

into treacle tarmac. A boy laughed at my accent,

smudged tar on one of my sandals.

Later, on a window ledge facing a brick red sunset

lay the sandals I wished would disappear.

◄ Tribute to 'warmth and humanity' of poet Christo James

Thank you Martin, Stu, Col, David, Laura and Cynthia. Lovely to read such kind words from you all, it means a lot to me. Many of you were like 'mentors' to me earlier this year, guiding and encouraging me through my first months on WoL. You helped more than you might realise. Massive thanks to you all.

hey Paul, I know how hard you have been working on your writing over these past weeks and getting them accepted by all sorts of journals. This feels like a fitting reward for all that hard work. Try not to forget us pauper poets here on WoL when your agent is promoting your latest bestseller and you're supping coffee with the in-crowd! Your comments and contributions have always been highly appreciated by all who receive them. Have a peaceful Sunday pal. Col.

great poem paul, huge bounds in the confidence of your writing since you started posting on here and the work you have been doing really shows through in this.

very worthy POTW and opens itself up like a flower on repeated readings.

see you next month!

Love this vignette of life. I remember times of bone dry August air and treacle tarmac. I also recall August th under storms when after the downpour had passed steam would rise off the roads.
Nice one Paul. Well deserved POTW.