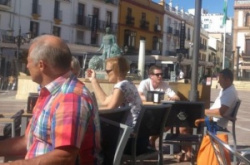 ‘People Watching’ by Paul Waring is Write Out Loud’s Poem of the Week. On his profile page Paul, a retired clinical psychologist, tells a remarkable story – that he used to write poetry in the 1990s, stopped for 20 years, then couldn’t locate his poems when he looked for the file last month. Undeterred, he started writing some again – and at the same time he joined Write Out Loud. In our Q&A he reveals that his poetic hero is Philip Larkin.

My love of poetry began as a teenager in school where our English teacher who, for those old enough to remember, had the patience of Wendy Craig from the TV series Butterflies. She somehow managed to engage my giddy Monty Python-inspired classmates and I to read and enjoy the works of many great poets. I vividly remember how nervous I felt when she asked me to read Gerard Manley Hopkins 'The Windhover' to the class. I think my enjoyment of rhymes and word play helped me to write song lyrics in the 1980s and then, in 1990 to write my first poem.

What kind of poetry do you write?  What motivates you?

I have written quite a range of poems so far and my Write Out Loud postings have ranged from the deadly serious to the light-hearted and humorous. I enjoy the process of starting with an idea, maybe an image, a word or a phrase and then letting my mind wander until things start to gel and flow. As a (retired) clinical psychologist, I am motivated to write about people and their behaviours and am an avid people watcher. But, I am equally motivated to write about life in general; everyday situations and the natural world of flowers, birds, animals, insects, etc.

If you could only have one poet’s work to read which one would you choose?

Undoubtedly Philip Larkin. For me, he always had a unique gift of telling a story in a poem using, often, simple but carefully chosen words. His poem 'Mr Bleaney' is a great example for me. The down-to-earth nature of his work reminds me of the “social realism” films of the 1960s that I've always enjoyed (e.g. Cathy Come Home, Up the Junction, etc) which depict British society warts-and-all. I particularly like the honesty and clarity (and occasional irreverence) of Larkin's writing.

Do you perform your work and if so, where are your favourite places to perform?

No, not yet. However, I do plan to before long because, since I started writing again in December last year, I now have a number of pieces that I would feel comfortable reading to an audience. I did read one of my poems, called 'Home', at my father's funeral in 2007.

If you found yourself cast away on a desert island, what luxury would you pick?

A Nespresso machine -  as I don't think I could get started in the mornings without a coffee or two. With any luck, before I'm cast away they'll have invented a Nespresso iPad (with wifi), so I'd be able to continue writing, enjoy espressos and keep in touch with Write Out Loud!

a window seat provides a view

who haven't got much else to do

than nosey-hole while drinking tea

or coffee, if I'm at the shops,

for no trip out can be complete

without one of my routine stops

for observations of the street

from Costa or another chain

to spy as people come and go

before I leave to catch the train,

and eye-ball shoppers I don't know

who come in every shape and size

young and old, they are quite a sight,

some glued to phones and eating pies,

with lumps and bumps and pants too tight

I must admit to being obsessed

the people with more life than me

Once more with feeling: four Surrey Poets at the Torriano ►

Thanks so much for your congratulations Kimberly. I am very pleased that you enjoyed the poem so much.

Suki, I really appreciate your warm words. Thank you so much.

Thank you for your hearty congratulations Martin, I am very grateful to you indeed.

Its hard to add anything to what has already been said except that people watching is a wonderful pastime as well as fabulous material for writing.
Well done
hearty congratulations

Thank you so much for your congratulations Frances.

Thank you so very much Stu, I couldn't ask for a more glowing tribute, I'm completely hillocked and horlicked at the moment!...not just by your kind, encouraging words but also because I'm so chuffed to have been awarded POTW. Thanks again, and bravo to you, you are a true gent.

lovely stuff paul, you sit atop the WOL hillock for a week and it is richly deserved.

i was fully prepared not to enjoy this, i dislike rhyme in poetry (an odd opinion but mine all the same) but the great use of observation and the wonderful, dark last line brings this piece above the usual sing-song lala work i usually (falsely) assign rhyming poetry.

i hope this gives you a warm, horlicks feeling inside and that you continue to post your excellent work with a new found sense of confidence.

edit - you have infact spurred me on to write my own little rhyming ditty, and in doing so exposed my reasons for disliking rhyme (i am not very good at it)

Thank you so much for your congratulations Laura. You are right, as a newb it was a wonderful surprise! And, you'll be pleased to hear I managed to track down that cheeky impostor Louise and edited her out of my comment! (actually, I'm blushing so much about the gaffe, I could defrost a chicken on my face....) ?

Graham, I can't thank you enough for your generous praise about my poetry. I am genuinely thrilled that People Watching was chosen as POTW, it's given me a warm glow! (or was that because I mistakenly referred to Laura as Louise I wonder.......?) ?

Well done Paul - not bad going for a newb eh? ?

And who is this impostor Louise then?

Congratulations Paul. A very worthy and deserved winner. You've already become one of our most prolific writers and commentators on others' works.

The beauty of people watching is that it is totally free (unless you do it in Costa of course) and easy to do. Getting it on paper not so easy though.

Thank you C?L, it was a joy to read your comments. I am so very grateful to you, as always! Quite honestly, I can't believe my luck since I started posting on here just over a month ago. I've been amazed at the positive, encouraging comments I've received.

I'm so pleased that you appreciate what I've written, and you deserve so much credit for engaging with many other aspiring poets on WoL, offering advice to try to help them to develop. I do bear in mind all the pointers you give me and it helps a lot. Stu Buck and Laura Taylor have both told me in the past week that WoL has significantly helped them and I look forward to benefiting from being part of things on here for years to come.

And I look forward to continuing our dialogue Col. Thanks a million.

Thank you Raj for the wonderful compliment that you have paid me. I was so pleased to read your kind comments. You have managed to sum up perfectly my intentions when I write. In return, I would like to thank you for the positivity you express in your own writing. You always come across as a good man with a good soul. Thank you for that. Paul

I guess it's not that hard to tell from the praise left in comment boxes when one writer appreciates and connects with another. I for one have very much enjoyed your contributions here on WoL since you joined a short while back. Your work has ranged over a number of themes and has taken us from the laugh out loud to the deep and meaningful. It is always refreshing to see a writer exploring his craft in this way and an inspiration to others to step out of their comfort zones. Well done Paul, for this and all your previous and yet to come poems.

(Re my profile pic, my little cardboard cutout digital birds get everywhere but I was trying to look arty not menacing! I'll try and smile next time)

Have always found your writing, engaging, entertainment perceptive and accessible. Your understanding of the human animal has been particularly impressive. I guess it's all that caffeine!!