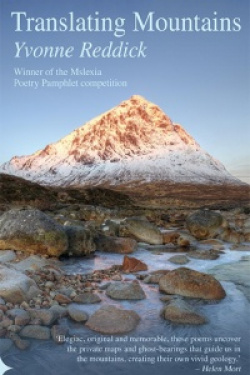 This pamphlet by Yvonne Reddick was the winner of the 2016 Mslexia poetry pamphlet competition. Born in Glasgow, Reddick won a Northern Writers’ award for poetry in 2016 and is currently an academic researcher and lecturer at the University of Central Lancashire. Her poems have appeared in Stand and Shearsman and Palgrave Macmillan are about to publish her book, Ted Hughes: Environmentalist and Ecopoet.

The 16 poems that make up her pamphlet lead the reader into a persuasive emotional geography, almost entirely by way of the landscape of mountains.

We follow a shapely journey, first by collaborating in a search for a missing climber and eventually by witnessing “[all] the dead come striding/from Steall Falls//and Coire Eòghainn,/up Jacob’s Ladder”. The dead assemble “with spindrift hair”, “on a single peak” and the pamphlet’s final words – “and the whiteout//lifts into light”, conjure a vision of them ascending together into heaven – but without saying anything so explicit.

These are elegiac poems, many written in response to the death of Yvonne Reddick’s father in a climbing accident in Scotland. There is also the death of a mountaineer friend in the Andes, plus the adventures of another family member, several generations back, a crystal hunter who “shins down to the blind-end fissure” in the Alps.

These poems make no easy sense of either the risks involved in climbing, or the impossibility of her father’s changed state, “from solid to intangible”. Instead the pamphlet’s first person voice draws us into emotional and materially-grounded journeys; some are undertaken with her father prior to his death, some during its immediate aftermath, others in dreams and in memory. In the process we learn how risk averse her father was, in a poem saturated with an entirely unspoken ‘Why!’ (‘Risk’). Indeed, the dead themselves, at times, actively beckon both reader and poet “along the path I can’t follow” (‘On the Alaskan Peak We’ve Never Climbed’). Similarly,   “the careful hand” of her grandmother’s grandfather “beckons/in sepia ink, to the keyhole pass” (‘Alexandre Resteau, Geologist Manqué’).

What will remain with me from these poems, whose language manages to be both delicate and robust, are Reddick’s descriptions of grief - for example, in ‘Sorrows of the Deer’, lines such as “I need to weather brunt winds,/ stolid as a tor/where mizzle pools and trickles − /I am hornless,/the wind stings through my fur”, and a stanza later, “I want to endure”. These images evoke a pain that only more pain can equal, a reaching out for sensory substance when substance – her father’s remains – is about to be committed “to fire, to air”.

Embodied grief is brought vividly to life: reliving her father’s accident in a dream, the speaker wakes “heart a trapped finch at my ribcage”; her mother’s hand is “weightless as the quills of a wing” as she “pads across the floor above”. This consistency of imagery – as here, in ‘At the Corrie of the Birds’, makes for profoundly satisfying poems.  The fragile lives of human beings, animals and the environment itself are repeatedly intertwined, each lending resonance to the particularities of the other’s strengths and losses.

I loved Reddick’s use of language.  She takes her time, doesn’t clip her words or dump articles unnecessarily.  Lines such as “Monte Somma’s rugged mezzaluna” in ‘Vesuve, 1857’, a poem that ends with “that hellmouth whiff of sulphur’, are a delight; similarly, “my clumsy mouth stumbles their meanings” in ‘Translating Mountains from the Gaelic’.  Sometimes I felt that the present tense was over-used to give actions and emotions immediacy – but overall, this is a beautifully structured pamphlet that offers the reader a deeply felt sufficiency. Its poems are moving, yet never once shift into despondency or melancholy.