2017 and Trev goes to Texas for a 7th time: McAllen to Austin 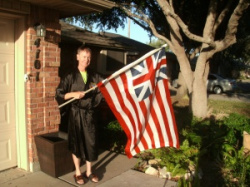 Image: Clark removes the colonial flag as I depart thus notifying neighbours his English guest is no longer in residence. I had a great time and was sad to go.

Audio: Clark is playing on piano, his very own variation of Pachelbel's Canon  one of the best I have ever heard.

Shower an’ dress for the day ahead

Another long drive towards the end of my 2017 roam

McAllen to Austin for my flight back home

But before I head, North there’s thanks to be said

To my hosts who gave their best, welcomin’ me as a guest

Took me to their hearts it was fine, as I equally took them to mine

But time does fly and we have to say goodbye

Which for friends is tough, sometimes words are not enough

So we’ll hug an’ try not to shed a tear

Cos’ God willin’ I’ll be back next year

149) Car engine started, into gear an’ away to Austin for tomorrow’s departure day

Northwards on the interstate I go, listenin’ to the radio

Divin’ along it’s a song called “Time after time”

I’m thinkin’ should I adopt it for my prolificness an’ call it “Rhyme after rhyme”.

Despite some drivin’ in the hottest part of the day

But I had air conditionin’ goin’ an’ country music flowin

Time passes an’ soon, I’m in Austin by early afternoon

To the library as usual, check Facebook an’ messages from home

Replies sent about where I went

Then to my motel room, book in, then away

Somewhere quiet to enjoy the rest of the day

Then back later I make sure things is right, for tomorrow’s homeward flight