2017 and Trev goes to Texas for a 7th time: The journey home 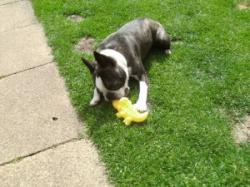 Image: Milo playing with his present: The Austin Alligator. I wanted something relevant to Texas and as I had photographed an alligator in the wild at Brazoria Wildlife Reserve in 2012 this one seemed appropriate, and it squeaks too.

Audio: Grimethorpe Colliery Band Playing Jerusalem, ideal for my final flight and drive across the Pennines to my beloved Yorkshire and home.

The relevance of the no ice is that with it you usally get a short measure of soda, at the schools I tell the students not to go too heavy on the ice, and get value for money

With French Fries an’ soda, no ice still tasted nice

No ice! Now some may think that’s funny

But I’m a Yorkshire Guy who likes value for money

See the animals for one last time, capture their antics in rhyme

Said I’d do the possums in their cages, at first it looked like it may take ages

It was a matter of go to it, go do it

Give ‘em clean beddin’ paper, water puppy chow an’ it makes my day

When some of ‘em starts tuckin’ in straight away

One comes to my hand an stars play bitin’

In fun I could tell, cos’ if he wasn’t it’d hurt like hell

Got all the cages just so, then it was time to go

But what I’d done sure had been fun

An’ one things clear, I sure hope to be comin’ back next year.

Guy singin’ about how God above

Blessed the broken road that took him to his true love

An’ I’m thinkin’ maybe change the words to suit me, an’ they could be

God blessed the broken road that led me home

At the end of another great poetry roam

154) Called at Thom’s dropped of the cell phone

No use to me when I get home

David’s there, we greet, then lunch to eat

Laughter an’ jokes at the recent antics of us poetry blokes

Sayin’ what we dared, how we fared

Goin’ across the Panhandle Plain an’ comin’ back again

An’ they did yearn to learn, how the Rio Grande Valley went on my return

An’ I could tell them it went swell

An’ Thom did tell, Connie was feelin’ great cos’ Lamesa went well

Yeah free verse, music or rhyme; we’d all had a real good time

Bob was already home. Tomorrow I would be too, but no need to be blue

155) Goodbye hugs done, to the airport I run

In less than three hours I’ll be homeward bound

Stow luggage in above locker

Prepare for take off

Bathed in sun, we’re in the air

159) Flyin’ into the night Eastwards we go, Mainland America still below

Dark outside an’ we’ve still to cross the ocean wide

The Pond, to England beyond

Nothing to see, it seems a boring part of the trip gonna try an’ have a kip

Atlantic below and we’ve just over an hour to go

Sky’s clear, Heathrow’s getting near

Hopefully bathed in sun, and I’ll be glad when this flights done

161) I look out of the window and smile, we’re over The Emerald Isle

Forty five minutes we should be on the ground,

And they’re bringing breakfast round

162) Landed at Heathrow to find, weather much cooler and security a bind

Would have thought it plain, we’ve been through it once, why again

Once through ring taxi firm to confirm

What time to expect me, where to collect me

Then find the departure gate and somewhere comfortable to wait

163) Brief rest feeling alright, got coffee and a snack for the flight

Seat found sit down safety instructions read, to the runway we head

Clearance given away we run, take off my final flight has begun

164) At Manchester I got off the plane, once more on Northern soil again

It had, I was delighted when we were reunited

Taxi home to end my roam and what better way

Than watch Milo playing with his present from Texas USA

Thank you very much.

I'm from the Rio Grande Valley of Colorado, so this is nostalgic in a way. Never been to Texas myself, and I'm from the US. Hope your travels take you where poetry is appreciated, and good luck.