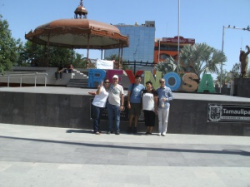 Image: In Reynosa, Mexico. l to r Perla, (Mario's sister), me, Mario, Chiviz (his mum) and Clark after enjoying breakfast and a morning in Mexico.

Audio: My friend Clark playing piano, a tribute to his husband Mario, "Mario's Song" such a beautiful tune.

Tell ‘em where I worked an’ about my hometown

Then I let the poetry go down

What I got to say, about what I write on the way

Answer any questions that want to ask, always a pleasant task

A sheer delight, then I was away to find my room for the night

125) Clark’s welcome at the end of yesterdays roam,

Said treat this house as your own home

Shower dress an’ before my eyes a pleasant surprise

A real treat, breakfast on the table ready to eat

Breakfast eaten, thanks said, my car I’m in,

Drivin’ away to let the day begin

Sharin’ poetry in the main, cos’ The Road Poets back in the Valley again

About carin’ about sharin’ sad or funny,

What it had, what’s gone but Castleford still carries on

An you can bet, I’ll tell ‘em about my family an’ Milo our pet

But one thing I gotta do, is stand up and recite poetry too

127)  Harold began the classes giving them the notion,

Poetry was a good way to express emotion

Therapy when times are sad, when feeling bad

From sadness to joy and gladness

He was a hit, sharin’ what other poets had writ

An’ givin’ a leanin’ as to their meanin’

Then more as I stepped up to read my first score

A poem written on inspiration to promote aspiration

Followed by an ode I’d written on the road

An’ the writin’ game, how poets play it,

Knowin’ what to say an’ usin’ fewer words to say it

I thought it went well the time I had was swell

Some students did exude expressions of gratitude

But there was more to come an’ then some

She’d been in one of the classes today

Her name was Anna, I shook her hand and thanked her

An’ as I came away thought “Yup, her thanks really made my day”.

Familiar faces, no airs or graces

Pleasant chat an’ a few jokes, from a group of regular folks

My first thought, an Armadillo I suppose

But as I got near it became clear

I would find it was an animal of a different kind

A possum, I drove by an’ smiled it was the first one I’d seen in the wild

Goes alright when the students recite

Then the visitin’ poets give rendition

Old or new poems from their latest edition

I can feel they’re listenin’ my inspiration glistenin’

131) Sometimes between an ode, I’d talk about life on the road

What I bring from home to help me on my roam

My thermal cup in which I store

Their imagination it seemed I’d captured

They seemed to sit there enraptured

An; extra taste would pass the poets lips as they sprinkled it on their potato chips

132) as usual time passed to soon, it was the last class in the afternoon

But with talent Weslaco East would glow

As their young writers and performers had a go

With the visiting poets they let it flow

Proving written creations whether on cell phones or book pages

Can unite people of all cultures and ages

An’ I just like to pick up the mic

An’ people find I say just what comes to mind

Impromptu off the cuff, is it enough

To win first place, do I really care? for me the fun is just being there

I didn’t win; I guessed I wouldn’t from the start, but enjoyed takin’ part

An’ although I hadn’t won, it sure was great fun

Nothing when I turned the key, something wasn’t right

No engine noise from under the hood, things didn’t look good

Thought about ringing for help, looked down an’ it became clear

An automatic doesn’t start, when it’s left in gear

135) Turn left the GPS said, I did and was filled with dread

A silly trick I’d turned to quick In the wrong lane I’m found,

Quickly on to the median thankfully it’s solid ground

A quick manoeuvre an’ its plain, I’m back in the right lane again

The following poem was written at a Loteria event where picture cards are selected and a poem or story made out of using them in any order.

136) He was well dressed, looked good, who could surmise

He really was the devil in disguise

Sown an’ a tree of evil grown

Misfortune shaped the bottom of the barrel scraped

And evils of drink abound, no sanctuary in the bottle found

The Devil defeated and the world put right

137) Pictures for inspiration, use your imagination

Write a poem, write a story, make it funny, make it gory

It’s up to you what you do, what you find in your mind

It’s your choice, then give it your voice

Used in turn, not as one would expect but where they would best interject

Write them with flair, fit them where they would best impact, be exact

Be random, fit ‘em in tandem, be enthused get them used

Get them down, go to town, go for death, go for glory

After all it’s your story

This poem was a challenge from Co-founder Daniel Garcia Ordaz. Jesse G actually does recite in a monotone, but his work is so powerful. This poem is meant to be recited as such and capture the very essence of Jesse. Daniel does a good impersonation of him but he may find he has competition. Me

139) He was introduced, his work he produced

Behind the microphone, speaking in monotone

Let it rip, like firing from the hip, spoke out loud, spoke out proud

Didn’t care who was there

Went on to say, what was wrong with America today

The land of the just, no more trust

Saying he did feel, some weren’t getting a fair deal

It wasn’t fair, for always somewhere

There was discrimination in this once great nation

It wasn’t forced, but by many leaders endorsed

He spoke more and was asked to do an encore

South of the border down Mexico way

Reynosa breakfast to be had

With his friends and their family for this travelin’ lad

It may have given them the notion, it was a small bottle of suntan lotion

Turnstile, pay a dollar walk through an’ smile

Over the Rio Grande on Mexican land

Now let’s pick up the pace, an’ find that breakfast place

Breakfast at Estrella in English “The Star”

So I depend, on Mario asking what he’d recommend

I go with his choice an’ soon it’s here, I’m still soaking up the atmosphere

Refried beans an’ tortillas, sure was a delight

Now let’s see what’s goin’ down, on my first time in Reynosa town

142) Walkin down the main street, enjoyin’ the sound

Of street musicians playin’ an’ singin’ in the background

Sadly it isn’t always this way

Often things is goin’ down, drug cartels trying to run the town

But today all seems well, there’s nothing to fear

An’ I’m thinkin’ how great it is to be here.

143) We bought candy from street vendors an’ more,

An’ some of the toddlers weren’t too shy

To play high five an’ knuckle tap with the Limey Guy

Far from being wild, their parents just smiled

Watchin’ us stop to play, it seemed we were makin’ their day

An’ I’m thinkin’ as I come away, why can’t it always be this way

144) Time had us beat, had to leave cos’ of the noonday heat

We said goodbye, the ladies hands were kissed

Being here was a chance I had taken not missed

Leaving with the thought, sometimes the best times are short

But easy to find with the memories left behind

An’ the time I’ve put them in rhyme

Is another from the UK’s most prolific travelin’ poet

But glad because I’d been somewhere I’ve never seen

An’ at immigration Clark did inform

The officer I was famous international poet,

Who had just taken Reynosa by storm

I can because as you see,

So when this tour ends, I’ll easily remember my new found friends

Catch up on e mails from home, tell ’em about my roam

Then relax, later go for a swim, take it easy, do things right

Before our farewell meal tonight