Dudley's Grande Slam gets off to a flying start 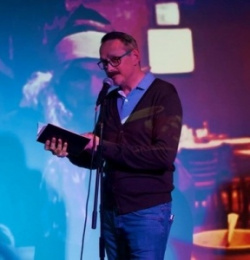 It’s always a joy to visit poetry nights who’ve got it right, and – judging by their opening night – Dudley’s ‘Grande Slam’, in the Cafe Grande in the heart of the town, has done exactly that. Hosted by local poets Rick Sanders, pictured, and Adrian Crossen, Grande Slam has found itself both a delightful venue, and an enthusiastic audience.

A maximum of 12 poets can sign up for the slam (eight slots bookable in advance, the other four on the door) with the winner – voted for by the audience, of course – gaining the opportunity for a 10-minute spot the following month, as well as a novelty prize. Competition at the opening night was fierce, and when the votes were counted Ben Moore’s excellent poem (about the way our obsession with mobile phones can destroy our closest relationships) just pipped the others to the post.

Like the slam, the headline slot is split in two shorter sections, on the basis that giving the audience a taste of what’s coming will encourage any waverers to stay till the end so they can hear what else the headliner has to say. Robert Francis, host of Permission To Speak in Stourbridge, rose to the task by reading a selection of his poems previously published in chapbooks, as well as more recent work exploring life in the Black Country. Among these, ‘IKEA sunset’ and ‘Our End’ are some of his strongest pieces to date, and were very well received.

Entry to the night is free, with the hat being passed round at the end of the night for voluntary donations to help support future events. This first event was a strong start. February’s Grande Slam will be on Thursday 23rd, with Emma Purshouse in the headline role. Another good night is surely guaranteed.

'Help each other, and we all get up the ladder': Jo Bell goes Nationwide in latest poetic TV ad ►

It's definitely a night worth catching, and I'm sure it'll only get better as it finds its feet! There's a lot going on in the West Mids right now....

a lovely, lively review, Steve. Sounds a good night, similar to Bang said the gun, or am I wrong?