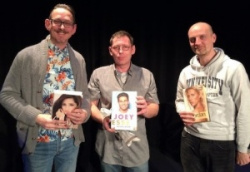 The new year starts with a new literature festival, in Wolverhampton. Seventy events throughout the city centre over a weekend, with talks from authors, activities for kids, workshops, and plenty of poetry. Intrigued to see what was on offer, the Write Out Loud team in the West Midlands visited as many of the poetry events at Wolverhampton Original Literature Festival (WOLF) as we could.

First up, on Friday evening in the Slade Rooms, was the spell-binding Leásungspell. The work of north-eastern poet Bob Beagrie, with atmospheric music from the accompanying musicians, this story of an Anglo-Saxon monk making his way to Whitby is haunting, dark, and mesmeric, using a mix of Northumbrian and Cleveland dialect, Old English, and invented words to draw you in. You can feel the mist around your ankles, the world of monsters just at bay. Incredible work, which you can get a taste of by listening here.

Later, in the Art Gallery, was Sarah L Dixon’s Quiet Compere event.  Ten poets each perform for 10 minutes as an appreciative audience (and the eyes of the paintings in the Georgian gallery) watch.  Sarah began by sharing some of her beautiful break-up poetry, “the sky had a hairline fracture”, before introducing a percussive Polly Stretton who kicked things off. She was followed by the immensely likeable poetry of Holly McGill with bodies in rivers, food banks and bobble hats. Next up was Nina Lewis with poems about family and relationships, “our love glared”. Leanne Bridgewater had free fruit for the audience and haiku-like cycling poems, before clock-smashing Tom McColl with his dry wit and clever wordplay took us into the break. Sarah L Dixon continued with the deliberately minimal compering in the second half. Heather Wastie gave voice to the canal, dropped in some local dialect and treated us to a burst of accordion playing fit to clean carpets.  A storming, high-energy “hip hop and chip shop” set from Gerry Potter followed, as we met with Jimmy and Tiffany Bling.  Then Jess May Davies took us on an emotional wave of lyricism, leaving us “Sleepless in Newcastle”.  Penultimate poet Kathy Gee gave us “adjustable bustles and glove-fit corsets”.  And finally Steve Pottinger rounded off a cracking event with an equally cracking set, where Wilko Johnson became president and Beryl’s laugh “the stuff of legend”. A top evening, finishing in time to get the last bus home. 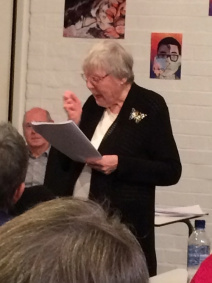 Early on Saturday afternoon we dropped in on Emma Wright, the force behind Birmingham-based Emma Press, talking about how she started out, what they do, and the future she sees for independent poetry publishing. Like so many of the events at WOLF, it’s a packed house.From there to poems and afternoon tea with Win Saha, pictured right, and Bert Flitcroft, introduced by Simon Fletcher, the man behind both the long-running and successful Wolverhampton poetry night City Voices and Offa’s Press. Win writes smartly-observed poems where the humour has an edge of steel (the “buttock-hugging denims” of the gardener) and today – at the age of 93 – shows she’s never afraid to learn by using a microphone for the first time. See her poem ‘Omelette’ about a neighbour who builds a henhouse (inspired by John Cooper Clarke’s ‘Chicken Town’) here.

Bert Flitcroft is Staffordshire’s current poet laureate, and a joy to listen to. His sonnet to a bacon sandwich, where his wife – shouting “something about pulling and weight” – throws a bacon sandwich at his head, is a wry, insightful comment on the dynamics of a relationship. Like all Bert’s work, it’s delivered with a twinkle in his eye. A master of his craft. 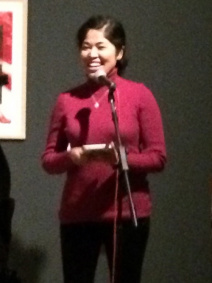 There’s just time to slip into another event elsewhere in the Art Gallery, where we catch the last few words of Arun Kapur’s set, but are then treated to the words of the excellent Romalyn Ante, pictured left, a Filipino nurse living and working in Wolverhampton whose work reflects both on her homeland where people “cut off their mother tongue” and her phone calls home to her grandfather reveal how much has changed.

A quick break for a bite to eat and some liquid refreshment, and then off to the Arena theatre for Black Country Voices. A show of two halves. In the first, Emma Purshouse, Marion Cockin, and Iris Rhodes – The Nailmakers’ Daughters – pack their poems with tales of class, grey peas, plaster alsatians, and outside loos. They break taboos with the Wednesbury cuckoo – not a bird, but a boiled sweet – shared with a boy (“wanna bit of suck?”), discover the chaos theory courtesy of the handle of a mangle, and learn from grandfathers how to take snuff “back of yer ond, don’t tell yer mother”.

After the interval, a performance by Dave Reeves, pictured below, poet-in-residence at the Black Country Living Museum, and the man behind spoken word internet station Radio Wildfire. Armed with, variously, a squeezebox, a harmonica, and the simple power of words, he brings us comic poems about canal life, beautifully delivered flights of imagination where Viking marauder Aynuk Bloodaxe settles in Netherton, and blues poems which skewer the difficulty men traditionally have with talking about emotions. A vibrant show, delivered to a large and appreciative audience. 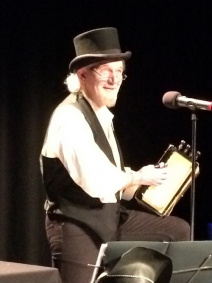 Sunday afternoon, and we glide out of the rain and into the Art Gallery for Bones and friends ..., a medley of poets, singers, hip-hop artists and rappers. Bones – who runs things with good humour and a light touch – starts with stories of growing up poor and black in Wolverhampton, aware that he’s washing his laundry in public, but doing it in style: “I wasn’t a bad child / just a little wild ...” He then introduces a dazzling lineup, exploring and blurring the borders where poetry and rap lyrics meet. Performance poet Dave Pitt adds to his growing reputation with his cautionary words on tabloid reading and his poem Tattooed Bride -  “she’s an effortless Bacall to my wannabe Bogart ...”. Solomon dedicates his hip-hop track to everyone working the 9-5 to pay the bills or because they’ve got kids to feed; Christian raps his poetry in ‘Shut Up and Drive’; soul singer Luke does a breathtaking acapella of a Miss Dynamite song; Nicholas Alexander, reading his love poem to Wolverhampton for the first time in public, slips in a quick reference to Wolves’ FA Cup victory over Liverpool the previous day; and Steve Harrison brings us a beautifully-worked piece ‘In the wake of Frobisher’, imagining refugees and dinghies as explorers and pioneers. He also offers us a poem on a Mobius strip, which – unsurprisingly – has no end.

An endless poem would only gather time penalties in the Wolves Lit Fest Slam, which rounds off the festival on Sunday night. In front of a sellout audience in the Arena theatre, 15 poets battle it out for the right to win some truly incredible prizes. The standard of performance, with poets drawn from across the Black Country, Stoke, Cheshire, and beyond, is breathtaking, the judging impeccable, and hosts Dave Pitt, Purshouse and Pottinger bring just the right amount of chaos to proceedings. There are belly laughs aplenty to round off the weekend, and when the scores are tallied Nick Lovell from Swindon, pictured top, centre, is the man holding the trophy, winning by a length from Willis the Poet, aka Rick Sanders, top, left, and Rob Francis, right. (You can hear Nick’s winning poem on Radio Wildfire on Monday 6 February between 8pm and 10pm)

Speaking to the organisers over the weekend, it seems the success of this first WOLF festival may have surprised them. Choosing to tap into the wealth of writers and performers living in the region may have been a necessity when putting the festival together with next to no budget, but it was also an inspired move. In doing so, they’ve given a platform and a voice to an area which is often overshadowed by Birmingham, its larger neighbour to the south, and – for one weekend at least – made Wolverhampton a city of words. There are mutterings of an intention to build upon this successful and popular weekend with a second festival next year. That’s good news for all lovers of poetry and the spoken word.

Dudley's Grande Slam gets off to a flying start ►