Pause and applause at Speaking Out Midlands in Cannock 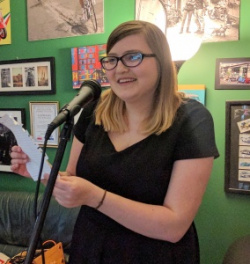 It’s always a challenge to build an audience for a new night. Hats off to Charlotte Postings, pictured, for finding a diverse range of poets and an audience who were more than happy to watch  them at Speaking Out Midlands – a new spoken word night in Staffordshire where the audience was so warm and friendly that even the milkshake machine got a round of applause.

Caffé Del Nino in the mining town of Cannock was the perfect space for poetry. The friendly staff, who served drinks and cake, and politely asked a poet to pause briefly between poems while a noisy milkshake was created, seemed to be enjoying the event as much as the punters. And why wouldn’t they?

The evening, made up completely of open mic spots, was a great mix of seasoned performers  and newcomers to the poetry scene who rubbed shoulders happily together to create a  thoroughly entertaining  event.

The 14 performers offered up a wide-ranging selection of poems and stories.  There was even a “thingy” from Chris Devey (it turned out to be a brave essay which was very well written and very well received).

Stand-out sets were delivered by the ebullient Dave Pitt and the wonderfully self-assured Vicki MacWinyers who revealed what was under her bed.  Phil Knight was excellent, both in terms of style and subject matter. His repertoire included a poem about Winnie the Pooh, one made entirely from Danny Dyer tweets and a third about discovering his own daughter’s inability to hear.  Essex girl Dayna Norton was also fabulous.  Her use of language, coupled with her energy and spark makes her definitely one to watch.

And apparently it’ll all be happening again next month folks, so get along to it if you can.

◄ 'Man' by Dyphrent is Write Out Loud's Poem of the Week 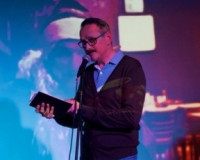