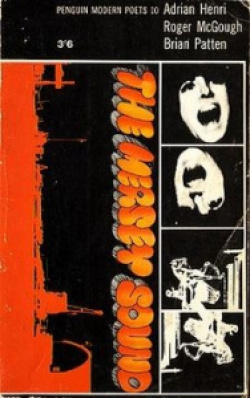 So, there I was, back in the city were I once spent three gloriously happy, if challenging years working and living; a city with a certain notoriety; a creative, canny, cocksure yet caring community; a city of characters, of comedians, and of culture.

And of poets, many of whom, and many more across the country – nay, the world –acquired or had rekindled their love for poetry, and a belief that poetry really was for people like them, from a slim volume that went by the title The Mersey Sound, first published in 1967 to huge acclaim - apart, as Roger McGough advised us, from most poetry critics of the time, who described the poets’ audience and readership as “the great unwashed”.

Through that book Adrian Henri, Roger McGough and Brian Patten are credited with bringing poetry to the masses, quite literally, with over a million copies believed to have been sold to date. If memory serves, it also inspired Liverpool’s wonderfully-named, and wonderful, Dead Good Poets’ Society, which became a benchmark for us when establishing Write Out Loud.

The Mersey Sound title was nicked from a local music scene that went global. “It was like La La Land,” McGough told us. But the real Mersey Sound – the poetry one - has possibly outlasted the musical version, as demonstrated by the fantastic reception of the sell-out audience at Saturday’s 50th anniversary celebration at the Liverpool Playhouse of the book’s publication, with McGough and Patten reading their work, old and new, supported by the poetry band Little Machine.

Although a commemoration, the event mercifully avoided the trap of musical equivalents that become a tribute act to themselves, bowing to an audience’s desire for “the old songs”. The two surviving poets did initially read just a couple of poems from the original book before delivering more recent work, and Little Machine performed two of Adrian Henri’s (he died in 2000) in commemoration of his contribution, though I’d have liked more from his oeuvre, and read not sung, but that’s perhaps just me. Henri was a fascinating character, wedded to the idea of infidelity, according to Carol Ann Duffy who, it seems, was well-placed to know.

Reading from the book, McGough was still pleading to die a young man’s death, though he’s already missed the fate he sought at 73 (he’s 79) of being “mown down at dawn/by a bright red sports car/on my way home/from an allnight party”. He is, though, on target for “when I am 104/ & banned from the Cavern/may my mistress/catching me in bed with her daughter/and fearing for her son/cut me up into little pieces/& throw away every piece but one.” (‘Let Me Die A Youngman’s Death’)

Brian Patten read his riposte to, or reworking for the swinging 60s of Tennyson’s ‘Come Into the Garden, Maud’: “What took place in the garden? Maud, it is over/ You can tell us now… Do you wear a Mary Quant dress/and eat fish and chips alone at night?”

The Adrian Henri contributions were the wonderful ‘Love Is …’  (“feeling cold in the back of vans/… a fan club with only two fans… a pink nightdress still slightly warm/…when you have to leave at dawn”);  and ‘Car Crash Blues’ which, on Little Machine’s own admission later, was a near miss, and hardly better reprised as an encore. I don’t mind music with poetry, and quite like the idea of Little Machine’s project, but the execution didn’t really do it for me. That said, looking round at others’ reactions, I might have been in the minority.

A few of Roger McGough’s poems were also performed as quasi songs. Perhaps it’s wrong to compare but I was at Patten and McGough’s 2005 Catholic cathedral crypt event which was one of those evenings that most attendees will remember forever, and perhaps I was expecting the same last Saturday night. For me, when he read his poems without the music, McGough was as superb as ever.

Brian Patten often reminds me of Just William, a tousle-haired urchin with a cheeky grin, except that his utterances always make perfect sense, when they are meant to. In particular, his ‘The Minister for Exams’ I find exquisite in its execution and intent: “When I was a child I sat an exam. / This test was so simple / There was no way I could fail. // … I described the grief of Adam when he was expelled from Eden. / I wrote down the exact weight of an elephant's dream.” It concludes:

Yet today, many years later,

for my living I sweep the streets

or clean out the toilets of the fat hotels.

Why? Because constantly I failed my exams.

Q1. How large is a child's imagination?

Q2. How shallow is the soul of the Minister for exams?

As he finished the reading of that, there was a collective Aw! from the audience. As  he reminded us, Patten was a secondary modern pupil who failed his O-level English exam and left school at 15. The exams were conducted at the posh school nearby, Quarry Bank, which was “full of working class heroes” such as John Lennon. One of my favourite poems, Gray’s ‘Elegy Written in a Country Churchyard’ carried resonance throughout my career in education and into my work with Write Out Loud, with its message of everyone having the potential to learn, grow, develop, like Brian himself: “Full many a flower is born to blush unseen/ And waste its sweetness on the desert air”. For me, the same set of messages as ‘The Minister for Exams’.

Thank goodness Brian has remained neither mute nor inglorious, though he sometimes comes across as unconfident. Afterwards, as he signed my copy of the newly republished original version of The Mersey Sound, I asked if he’d enjoyed the show. He paused to pick his words: “I’m glad it’s over,” he said. “I think I chose the wrong poems.” He hadn’t at all. Was this the Minister for Exams still at work in the background?

The introductions and asides are as much a part of these shows as the poetry, and I enjoyed Brian Patten’s tale of the time, just after the death of his friend, the much-lamented Adrian Mitchell, that in his little orchard in Devon he’d poured two glasses of wine, one for Adrian, one for himself and talked to his absent chum, “once February was over”.

McGough’s final set wove in and out of poetry, memoir and song, with odes to leaves, fears of the “jungle out there”, Global Scouse Day, eating mermaid and chips, “half woman, half haddock”; charity shop blues: a cut-price mausoleum of loss and loneliness; the Periodic Table: “I am the very air you breathe/I welcome you at birth/wish you goodbye at death … with your last gasp you will say my name: O.” And of parents forcing children’s learning: “He potty-trained himself at 13  months after reading a book on how to do it”.  At Carol Ann Duffy’s suggestion he rewrote ‘Let Me Die a Youngman’s Death’: “Let me be a burden on my children/ and on my children’s children too.”

The evening was excellent, and clearly sold a lot of books. The queue was long yet put no one off; they wanted those precious signatures. Above all, it was a privilege to be there, in Liverpool, where it had all happened, and to be hearing new work – and work in progress – from these two, inspirational master poets to whom we owe such a debt.

Ernestine Carter wrote: "It is given to a fortunate few to be born at the right time, in the right place, with the right talents.” Without that book, and those three talents, would we have such a vibrant live poetry scene in the UK as we do today?

Background: Remembering a ground-breaking book of poetry, 50 years on

◄ Who will be this year's best spoken word performer? Deadline nears for first round of Saboteur awards voting

You band of poets inspire and give me hope. Thank you