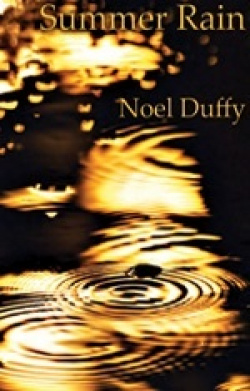 I knew the word “entropy” and had a vague idea that matter becomes disordered over time. Nothing more. Noel Duffy’s collection changed that very satisfyingly. It educated and interested me in scientific ideas and their development. In an understated but powerful way, his poems explain scientific theories and show their intermeshing with the personal lives and relationships of scientists.

I didn’t expect this from a poetry collection, even though poets are now told to be circumspect about traditionally “poetic” material. In Summer Rain, his third collection, Noel Duffy turns to his early training in experimental physics at Trinity College Dublin. He has already won the START chapbook prize and been shortlisted for the Shine/Strong award for best first collection by an Irish Poet.  Summer Rain divides into three sections: imagined scenes and conversations in the professional/personal life of the Austrian physicist Ludwig Boltzmann; poems that echo the work of the Romantic poets while exploring the theme of matter moving and transforming itself; and 10 dramatic monologues all involving summer rain.

I enjoyed the first and second sections most. Of his depiction of Ludwig Boltzmann’s life, Duffy says, “small liberties have been taken … to relay such a complex subject in a contracted form … in order to draw out the dynamic of the relationship between the characters at the heart of the story”. His poems span the last 12 years of Ludwig’s life, their “titles” simply the years when a scene is set. Extracts from conversations often feature, for example in ‘1895’: “ ’Another drink, Ernst, or are you already sated?’/’I’m fine as I am, but go ahead as you wish.’ ” Who was speaking was not always clear and sometimes the poems felt close to lineated prose. Yet there are distinctive rhythms and the contracted form of a poem meant that the words resonated beyond themselves - especially in final lines: “ ’And it is even more disorderly now, this the fate/that awaits us all when the game is done.’ ”(‘1898’). And:

Franz goes to the door and leaves. Ludwig chuckles,

then takes a sheet of paper from a pile,

lifts it closer to his failing eyes.

As a poet I was excited to find myself understanding theoretical physics - and moved by both the love Ludwig inspired and his tremendous suffering, made vivid through use of the present tense.

‘1900’ shows Ludwig by a pond in a park. He’s watching boys racing paper boats, and concludes: “how by such small things observed, the world might/be understood, its patterns arrested in reflection/and thought …”. Section two (‘Into the recesses’), elaborates this moment through beautiful, sometimes savage images of the natural world.

Each poem effects a transformation or a movement between dualities – and Ludwig hovered in my mind, watching paper boats carried along by “some invisible force”.  ‘Triple Point’ begins: “The three boundary lines/converge on the phase diagram” (sending me to Google), yet later reveals “the mist that rises up above the lake’s surface,/a lingering vapour; the crystalline flower of ice/that glistens”. These gorgeous poems also remind us of the ultimate transformation, of life into death: in ‘That Which Lives Beside’, a wolf kills a fox cub. Its mother retreats, “the wolf already ripping and pulling at the carcass/dripping blood on the muddy gravel.”  In ‘That Which Lies Beneath’, a hooked fish suffers “a final ordeal/for the old soldier of the deep”, eventually drawn “in and upward from his watery element/into the alien light of the moon rising over Windermere.”

The 10 dramatic monologues in the third section carry the first names of the characters as titles. Many of them are troubled, some having undergone a traumatic experience; the slow disintegration of a marriage, bereavement of a grown son, loss of sight. Their stories are varied and interesting, although I felt that too much was said in some of them, and in language too prosaic for my taste. But I enjoyed pursuing the theme of change, insight and transition/transformation, this time through the lives of individuals rather than the natural world.

Overall this is a satisfying collection that has expanded my knowledge of science and stimulated me to search in unexpected places for poems to come.

◄ Looking for poems about courage to put on display in Huddersfield