Once more with feeling: four Surrey Poets at the Torriano 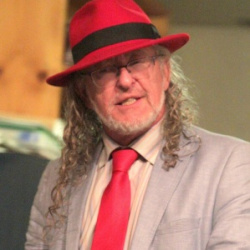 The Torriano Meeting House in north London has played host to many poets over the years. On Sunday it welcomed four from Surrey  – although, technically, only one was really from that county – plus its usual varied and distinguished crop of open mic readers.

The Surrey Poets were Irishman Donall Dempsey, pictured right, who comperes the monthly 1,000 Monkeys poetry night in Guildford; Berkshire-based Patrick Osada, a member of South magazine’s editorial board, who has just published his fifth collection; Kyle McHale, from Maryland, US; and Surrey’s Eddie Chauncy, who, like Kyle, regularly reads at the 1,000 Monkeys. Both Eddie and Kyle are regulars at neighbouring Write Out Loud Woking as well.

Donall and his wife Janice run both the 1,000 Monkeys, and their own publishing company, Dempsey & Windle. Their entry in the publishers’ section of the Poetry Almanac published by the Poetry Book Fair last year says: “Above all, Donall Dempsey and Janice Windle value genuine feeling communicated by any poetic means” – and all four showcased poets demonstrated that in different ways on Sunday night.

Donall Dempsey is a big man with a voice to match. He writes and publishes online a new poem each day. A true bard, his poems emanate warmth as well as whimsy, with, it seemed to me, echoes of the Liverpool Poets in his style, in his success at communicating with his audience. He talked of encountering “the Spinach Armada” and “Anne of Cleavage” during his teaching adventures with year 7, and read poems about ‘Gerry Sweeney’s Mammy’ and ‘The Smell of Purple’, and a quieter one about his late brother, ‘How Many Miles?’ He also smuggled in a few lines of Chaucer in rap style, and concluded with a poem commissioned by the BBC for National Poetry Day about Guildford’s Guildhall clock. 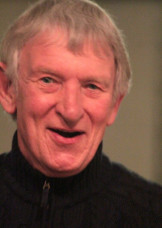 Patrick Osada, pictured right, is quietly spoken, and gives every word weight and space. His poems are of crafted rhyme and metre, and titles such as ‘Frost Flowers’, ‘Blackthorn’, and ‘A Change in the Weather’ reflect a keen observance of nature, although the latter contained another message, too. A poem about a loved one in a nursing home with Alzheimer’s was poignant, as was another about finding photos from his Polish father’s past (‘Private History’). His latest collection, Changes, is published by Dempsey & Windle. 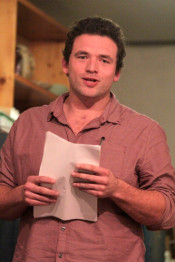 American Kyle McHale, pictured left, is looking forward to having his first collection published by Dempsey & Windle later this year.  His thoughtful yet outward-looking poems can take you to Venice or to the Blue Ridge mountains, or discuss issues in ‘Wrong or Right’, which examines questions such as his decision to move to England for love. It adds: “When I’m asked in restaurants, ‘What would you like on that?’, I say ‘Everything’ “. He ended with a poem that he’d only written that morning, ‘Never Having Been Here’, which includes a thought to bring you down to earth: “We all become a fallen tree.” 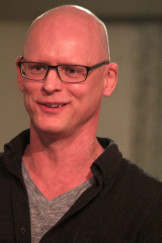 Eddie Chauncy, pictured right, delivered his structured and sometimes sensual poems with the serene assurance of a guru or seer; maybe it’s his background in psychology. His opening, seductive ‘Write Me a Poem’ concluded: “Like a book of poetry, I wear your works all over me.” He is forever looking for answers; why the smiles for babies disappear as you grow older (‘Prams and Smiles’); the mysteries of time and anger. Janice Windle, introducing Eddie, said: “He says he wants his poems to make life better.” He has never submitted his poems for publication in magazines, but has self-published his work, for charity. His books sell at local poetry readings like hot cakes.

The Torriano in Kentish Town was founded in 1982 by Hungarian-born John Rety and his partner Susan Johns. Readings are held every Sunday, and any review of a Torriano night should include the wealth of open mic talent, experience and names. Unfortunately I arrived late due to engineering works in the Wimbledon area, and missed some of the readers, Lisa Kelly’s assured poem after TS Eliot, ‘The Love Song of Any Mother’, was a highlight, as was Roy Lockett’s’ sestina about a beach in Northumbria. I should add that the Torriano was absolutely packed; as a latecomer I struggled to find a seat.

My favourite was 'Obstacles on the line at Berrylands'...

Your valuable and balanced style makes me feel that I was actually in the room Greg. I half smiled at the railway irony in your delayed arrival!
Ah well. upwards and onwards !