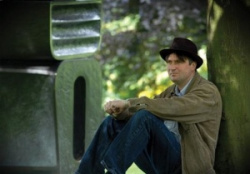 Simon Armitage will be poet in residence during 2017 at the Yorkshire Sculpture Park, a place that has particular poetic memories for him. The park at West Bretton, near Wakefield, celebrates its 40th anniversary this year. But Armitage remembers its former incarnation, Bretton Hall College, where he gave his first poetry reading, he told the Yorkshire Post magazine.

“I  gave my first ever poetry reading in one of the bars on campus,” he said. “I also came to the college to do a couple of writing days – once as a student and once as a tutor.” Since then he has done book launches, readings and workshops at the park – and been poet in residence there once before, in 2007, when he wrote a sequence of poems in response to an exhibition of Henry Moore’s work.

This time around Marsden-born Armitage, who is the current Oxford professor of poetry, aims to visit the 500-acre park throughout the seasons to respond to art, landscape, nature, and people. He will create new work to be published in the autumn in a pocketsize poetry “guide” and will curate a series of readings and events at YSP with other collaborators.

He told the Yorkshire Post: “The general idea is that I will write 40 poems and those will be published in a collection, I might also take photos and present it as a kind of scrapbook of the year. But I want the poems to be a bit oblique, not describing the views or the landscape. An idea I have been playing with is to re-imagine the place a bit. I have written about it relatively directly before and about some of the sculptures specifically, but I started to think about addressing the park as a country in its own right and one that has its own rules.”

The park has over 100 works on display across the estate, and shows work by British and international artists, including Henry Moore and Barbara Hepworth - the works by Moore are one of the largest open-air displays of his bronzes in Europe.  It is in the grounds of Bretton Hall, an 18th-century estate which was a family home until the mid-20th century.

◄ 'Why Marsden is important to me': poet tells of inspirational backdrop

This is good news. I love the YSP and visit as often as I can. I thoroughly recommend it as a place to view good art in beautiful surroundings. A really relaxing space with an inspirational for writing or just taking in the magnificent vibe of the place. I look forward to Simon Armitage's collection from being poet in residence.