'Why Marsden is important to me': poet tells of inspirational backdrop 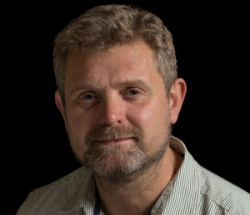 Poet and painter David Coldwell is launching his debut poetry collection, Flowers by the Road, on Wednesday 8 February at Marsden library. In an interview with Write Out Loud David, a regular reader at the famed annual Marsden poetry jam, and at Write Out Loud Marsden, talks about what the village and the surrounding hills mean to him, and his poetry and art.

You are a painter as well as a poet. Which art form is more important to you? How do you see the relationship between art and poetry?

Both art forms are equally important to me but in different ways. Before I start a painting I have a fairly clear idea of what I’m trying to achieve with regards to message and composition and generally the finished piece is a close match to what I have visualised in my mind. Poetry is different. It allows me to explore wider issues and the joy of writing and rewriting a poem is the discovery of those ideas along the way.

I initially trained at art college during the late 1980s and whilst doing so I was heavily influenced by the music of Pink Floyd, Japan, The Waterboys, U2 and The Smiths. Quite an eclectic mix but what all the bands had in common were interesting lyrics; something to say. I found that I was learning about the world through these artists and this had a direct influence on my work. This interest in lyrics led me back to poetry. I had studied Robert Frost for O-level literature and would search the poetry shelves of the local Huddersfield book store for further enlightenment. Unfortunately MacNeice, Eliot and the Nation’s Favourite Love Poems were all you would find along with the latest version of Shakespearean Sonnets. It wasn’t until Simon Armitage released Zoom that my poetry world really opened up. Reading a poem is very similar to reading a painting – it’s about seeing; understanding what the artist is trying to convey.

My son is currently applying to study fine art at degree level and it’s interesting that many of the courses actively encourage students to take additional units in subjects such as philosophy and literature.

Your webpage says your home is perched “at the corner of the Yorkshire Pennines and the Derbyshire Peak District”. How much of your poetry is concerned with the hills around you?

The hills play a leading role in many of the poems. The village of Marsden is at the head of the Colne valley in the South Pennines and as such it is surrounded on three sides by hills. No matter where you live in the village you can look out and see some distant hillside, see some light belonging to an isolated farmhouse hovering in the darkness. Growing up it was always the wonder of what was on the other side of the hill. As a young child I always dreamed that the sea would be just over the horizon – a theme I visit in a couple of the poems in the collection. The moors, although stunning in their isolation, also have a dark side – Marsden moor borders Saddleworth moor which is where Hindley and Brady buried the children in the case of the Moors Murders. This cast a long shadow over so many lives when we were young and in many ways still haunts the moors and valleys. At the head of Wessenden valley where the Pennine Way dips into the village there are flowers and toys tied to a fence in memorial to Keith Bennett who has still never been found.

Might you write a poem after completing a picture on the same subject? Or vice versa?

A couple of people have suggested combining the two art forms in the past but it is something I have resisted up until the publishing deal. After making news of the book public, Enjoy Art, a gallery in Marsden, suggested holding an exhibition of new paintings to help promote the release of the book. With having a collection published the time seemed right to create a series of paintings directly inspired by the poems. The exhibition will open on 18 February and run until the end of March.

Does your pamphlet Flowers by the Road have an overriding theme? How long did it take you to put the poems together?

The poems in Flowers by the Road are about loss: a loss of innocence, loss of youth, loss of community and loss of friendship. The title poem is about grief. I accept that perhaps I have chosen some difficult subject matters that are not the obvious starting point for poetry but these are themes that are universal and I hope that readers will find a way into the poetry.

I’ve been writing and publishing poems for the last six years and the collection does include both my first and last published poems so in answer to your question; a long time. I have, however, completed a second collection which is currently waiting in the wings so hopefully it will not be another six years before you see some new work.

Your collection was a winner in the recent Templar quarterly competition. Can you tell us about the process to publication after that? How much editing was involved?

It has all been very exciting and a little bit of a whirlwind. In the past I’ve entered a few competitions, including Templar’s, and although I’ve previously been shortlisted and received favourable feedback in a couple of national competitions you still never believe that you are going to be chosen so it really was a complete surprise when I got the phone call from Alex McMillen, the managing editor at Templar. I know Alex from having had a couple of poems in an earlier Templar anthology and from reading at Derwent poetry festival back in 2013 - so after the initial shock of winning the conversation on how to proceed was fairly straightforward. A decision was made very early to expand the collection to 32 pages which did mean more work but allowed more scope to develop the theme. Many of the poems have been around for some time and it’s easy to become complacent but seeing them in a collection sitting next to each other did encourage some additional editing. The third draft of the manuscript is the one that went to print.

You live in Marsden, a village with strong poetry associations thanks to the 19th century dialect poet Samuel Laycock, and latterly Simon Armitage. What does the area mean to you?

Marsden is hugely important to me and as a result does feature as a backdrop in many of the poems in the collection. Marsden is the type of place where you spend the first 18 years of your life dreaming of escape and the rest of your life dreaming of return. There is nowhere else I know that has such a strong sense of community and sense of belonging – the Big Society has been alive and well in Marsden for many years.

With the Pennine Way skirting the west of the village and the National Trust managing the thousands of acres of moorland the area is truly a delight. The village also has a thriving creative community of artists, poets, actors and playwrights and is regularly used as a setting for major television and film productions. Only recently Hollywood came calling when they filmed A Monster Calls in the centre and used a number of local children, including my son, as extras. Where else would you have this variety and only be 30 minutes from either Leeds or Manchester?

Simon Armitage has obviously been a huge influence on my work and possibly the main reason why I’ve kept returning to poetry over the years and kept discovering new poetry. I think it’s perhaps easy to underestimate his achievements, when you consider his background 25 years ago. Despite Simon’s awards and celebrity, however, my dad will still refer to him as Peter’s lad – that’s Marsden for you.