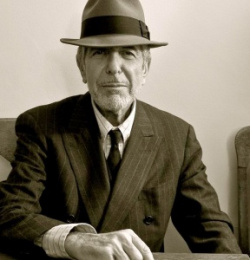 The singer-songwriter, poet and novelist Leonard Cohen has died aged 82. The news was announced via his official Facebook page, which said a memorial would be held in Los Angeles at a later date.

Cohen’s son Adam told Rolling Stone his father died peacefully at home: “My father passed away peacefully at his home in Los Angeles with the knowledge that he had completed what he felt was one of his greatest records. He was writing up until his last moments with his unique brand of humour.”

In an interview last month, Cohen said he was “ready to die”. He told the New Yorker: “I am ready to die. I hope it’s not too uncomfortable. That’s about it for me.” In the same interview, he said he had a vault of unpublished poems and unfinished lyrics to finish and record or publish: “The big change is the proximity to death. I am a tidy kind of guy. I like to tie up the strings if I can. If I can’t, that’s OK.”

Fans gathered outside Cohen’s home in Montreal to place messages and candles for the singer. When Bob Dylan was recently awarded the Nobel prize for literature, many of Cohen’s fans believed it should have gone to the Canadian artist.

Cohen was born on 21 September 1934 to a Jewish family of Polish origin. His father died when he was aged nine. He is said to have discovered poetry at the age of 15 when he read Lorca. After studying history at McGill University, Montreal, and spending a year at Columbia University in New York, he published his first poetry volumes – Let Us Compare Mythologies and The Spice-Box of Earth - before heading to Europe on a scholarship.

While on the Greek island of Hydra, he wrote Flowers for Hitler, a poetry collection that won him the Quebec literary award, his first novel, The Favourite Game, and Beautiful Losers, a book about religion and sexuality. In 1986 his musical career began with his first album Songs of Leonard Cohen, a year after the success of the song Suzanne performed by American singer Judy Collins.

In 1994  he retired to a Buddhist monastery on Mount Baldy, California, and two years later was ordained as a Zen monk. But in 1999, after being defrauded and almost bankrupted by his former manager, he began performing again. Earlier this year, to mark his 82nd birthday, he recorded his 14th album with his son Adam and the choir of Montreal synagogue, and sang “Hineni, hineni, my Lord” -  “I’m ready, my Lord” in Hebrew.

Cohen's other works of poetry include Parasites of Heaven (1966), Death of a Lady's Man (1978), and Book of Mercy (1984), which won him the Canadian Authors Association literary award for poetry. The book contains 50 prose-poems, influenced by the Hebrew Bible and Zen writings. In 1993 he published Stranger Music: Selected Poems and Songs, and in 2006, The Book of Longing, dedicated to the poet Irving Layton. Writing in the Observer,  Paul Muldoon said: "I have no hesitation in saying he was one of the great poets of the era."

Marianne Ihlen, Cohen’s most famous muse, died in July this year. Jan Christian Mollestad, a documentary maker and friend of Ihlen, shared a letter Cohen had written to her shortly before she died: “Well Marianne, it’s come to this time when we are really so old and our bodies are falling apart and I think I will follow you very soon.

“But now, I just want to wish you a very good journey. Goodbye old friend. Endless love, see you down the road.” Two days after the letters was read to her, Ihlen, immortalised by Cohen in the songs So Long, Marianne and Bird on a Wire, died. She was 81.

◄ Write Out Loud Woking at the New Inn tonight

What It's Like To Be Alive: Deryn Rees-Jones, Seren ►

Thanks for acknowledging. he was a true poet. Not got over this yet.

The words he offered to his friend near her death were
surely a vivid reflection of the humanity of the man and
deserve to be logged in some literary record as a worthy
tribute to his own memory.

Thanks for putting this up Greg. I am absolutely choked. We did know it was coming. He told us, and he was ready, but...

Well never mind, we are ugly but we have the music.