What It's Like To Be Alive: Deryn Rees-Jones, Seren 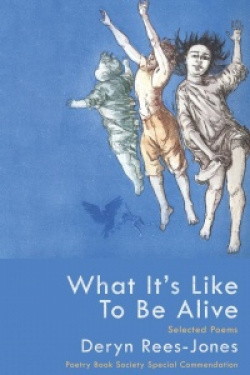 Deryn Rees-Jones is professor of poetry at Liverpool University. After her first degree in English at the University of Wales, Bangor, she completed a PhD in contemporary women’s poetry at Birkbeck College, University of London. Named as a New Generation Poet by the Poetry Book Society in 2005, she won the Cholmondeley award in 2010, and has published four collections of poetry. If you are new to her work, as I am, this collection, covering 25 years of her career, provides an excellent introduction, drawing on The Memory Tray (1994), Signs Round a Dead Body (1998), Quiver (2004), Burying the Wren (2012) and And You, Helen (2014) - plus a final, new poem.

The title poem, ‘What It’s Like To Be Alive’, carries all the here-and-now intensity of a love affair remembered; its long lines evoke an outpouring of feeling, the helter-skelter of passion, sobbing perhaps. Yet it speaks to the whole landscape of human existence, to “what it’s like to be alive”.  These are some of the most honest poems I have read. Nothing seems to be held back or glossed over. Sex is there, often, frank and erotic, along with love, loneliness, despair and loss. The spaces between – people, the sky and the land or the sea – are a recurrent theme.

The collection opens with a flourish from ‘The Great Mutando’ who “pulls rabbits out of hats,/ties up the day with handkerchiefs”. Plate-spinning, magic linking rings, doves and balloons complete his repertoire. Yet Rees-Jones ends by saying simply: “I want a name like that./and a world.//Wands. Fairy godmothers./No crocodiles.//A place where I can get/the handkerchiefs to knot.” I am won over by her honesty and her restraint in not aggrandising a sense of lack.

Poets in particular are likely to find this collection rewarding. Rees-Jones demonstrates a daring that invites others into the process of writing. Her rhythms are conversational and the rhymes are subtle, non-intrusive. Particularly in early poems, humour and playfulness repeatedly surface in lines which tread darker waters. A girlhood crush on Captain James T Kirk materialises years later – “truth is I loved you even as a child …”, after the speaker’s “bruised and rainy planet disappeared”.  She “make(s) the best of it”, even though “you’re not my type, but I undress you// and we fuck, and I forgive//the pancake make-up and mascara”.  ‘The One that Got Away’ made me laugh out loud – as the speaker intended – at “this doe-eyed, wide-hipped,/Inspectress of Peas, who//testing for sweetness, consistency,//size  ̶  this will kill you, you said  ̶  //with the Pea Tenderometer”. And I enjoyed the double-take of lines such as “your presence, meanwhile, like a rhyme, can take me to a corner/” (‘Song for the Absence of Her Lover’s Voice’) which evoked Leonard Cohen. And, in ‘A Brief Inventory of Facts about Snow’, another song reference: “That’s the glory, that’s the wonder of snow”.

The subsequent poems, from Quiver, were thriller-intense, making me read on, clue after clue, needing to find the story that coursed through these pages. So personal is the address in many – “I’ve learnt to run, like an adult learns to sing.” (‘The Cemetery’); ‘Will’s home already, the dinner’s on” (‘The Story of a Life’), that the reader imagines herself the poet/speaker’s (?) confidante.  Yet the poems reflect a disorientation, an unmaking, brought about by fear and loss; the need for a narrative thread is urgently felt – by speaker and reader – but doesn’t give itself up lightly.

Early playfulness gives way to more difficult poems; some actually difficult to grasp; others painfully accessible. After her husband’s death, ‘A Scattering’ offers lines such as “I’m a bride to silence, these smaller spaces,” and in ‘The Fetch’, “Twice she came and then a third,/her heart exposed, espaliered against her ribs,//her face pressed to the window”. By the time I came to the final poems, about the widow of poet Edward Thomas who died in the first world war, I was entirely in tune with Rees-Jones’ imagery of loss, her halting syntax.

How is the potency of these poems achieved? They move constantly between everyday conversation: “borrowing Will’s mobile, I leave a scanty message and my number/with Erica as I drive …” (‘Night Drive II’) and stunning imagistic language: “Liverpool opens like a rent in time” (‘A Visitation’); “my waking up, a slow arrival/at a face …” (‘Decisions’); “to the silence      where the sea/imagines itself” (‘Song of Despair’).  This movement between registers drew me in to confidential asides then startled me with the freshness of images. From the title poem, finally, “… how the bedclothes/were a tide, and the sunlight was a tide, and how everything pulled”.