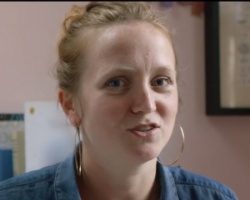 A new advertising campaign by Nationwide Building Society has featured leading spoken word poet Hollie McNish in its first film, which was broadcast during The X Factor on Saturday night.

The Nationwide campaign is said to celebrate the voices and stories of ordinary people with messages written and performed by poets. Hollie’s film, featuring her poem ‘Little Things’, focuses on the experience of being a mum, and is said to have been recorded in one take. It begins: “I remember that feeling that nothing would be the same again,” and ends: “It’s those little things you do that melt my heart.”

After it was screened, Hollie said on Twitter: “Thanks a lot for all the comments on the poem last night. Means a lot. Glad some of you liked it!”

The Nationwide campaign also features two other poets, Yorkshire-based Matt Abbott, and Sugar J Poet, from south London. Matt Abbott’s poem, ‘This Place Is Ours’, is on the theme of home. He is founder of the spoken word record label, Nymphs & Thugs, and co-founder of A Firm of Poets.Sugar J Poet’s poem, ‘Face to Face’, focuses on loneliness.

Sara Bennison, Nationwide’s chief marketing officer, said: “Nationwide has one of the best brand stories that has never been told, it is a brand of the people, by the people, for the people. So what better way to bring this to life than through the powerful voices of spoken word poets.”

Background: From Chickentown to McCain chips

Spoken poetry I do in rhyme
A God given gift when I have the time,

Now as the years fly by
I keep hoping to catch a certain eye,

My legs are weak but my heart is strong
The words I use are short or long,

So if you think that I have a chance to shine
Please act on these chosen words of mine.

How bizarre. We don't mind a plumber who's good at plumbing making a living out of it or a footballer or an author; but a poet, well that's just prostitution. (Come to think of it, I don't mind a prostitute making a bob or two out of her assets).

Well I'm with Nationwide. So if I allow them to use one of my banker-bashing poems will they extend my overdraft?

I have turned down every single request I have ever received for me to appear on such shameless capitalist promotions, though not sure how much longer I can hold out.

what ungracious comments from Graham and Stephen.
If poetry 'paid' better in terms of its value as an art form (we're happy to pay crap covers bands and dj's - but not so much original material by original poets) then maybe you would have a point.
Me - I celebrate the fact that poetry is on national television and fellow poets and performers are getting paid for their blood, sweat and tears.
While ever poets consider themselves too 'radical' to earn monetary recognition we will forever be treated as grubby little weirdo's with a Byron complex.
FFS guys, celebrate our successes - don't turn them into green eyed criticisms

Can a writer not be both radical and earn a living?

I'm not a very radical writer (albeit sometimes perhaps political and controversial) but being paid for work that I undertake fits in very, very well with my socialist beliefs and in no way undermines what I stand for.

I used to love watching the poet Henry Normal do his show. He had this great line where he'd mention that he had copies of his books for sale, and add that he knew mentioning that wasn't a very cool thing to do. "But it's not very cool when you can't pay the bills, either" he concluded.

It's a good point. Making a living as a poet is far from easy. We want as many people as possible to hear and enjoy our work, and yet we're often uncomfortable about mentioning money or asking for payment.

I think it's great that these poems are being broadcast on prime-time TV, that they might just make people think "Blimey. That poetry isn't just clouds and daffodils and boredom at school". Maybe they'll check it out. Maybe they'll end up at your local poetry night, listening to *your* poetry. And if it helps Hollie and Matt and Sugar J make a living, then all power to their elbow.

P.S. At the same time, it's fair to say that if you find me doing a poetry-ad for Starbucks or Caffè Nero, then you've every right to ask me some hard questions. OK? ?

I'm glad I'm not the only one thinking this. We'll have a performance poet on Britain's Got Talent next.

Didn't take 'em long to take the capitalist biscuit did it? Bang goes the notion that performance poetry is 'radical'.