Hollie McNish: 'My mum worked night shift as a nurse and had two kids. This is nothing!' 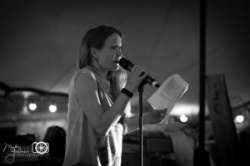 Two of her YouTube videos have been seen a total of more than three million times. Last month leading performance poet Hollie McNish won a £10,000 Arts Foundation award for spoken word. In April she publishes a new book and embarks on a national tour. She talks to Greg Freeman about spoken word and page poetry, putting her poems online, how performance poetry work with pupils "lets them speak", the first poem she wrote at the age of seven ... and how “climbing trees with my daughter will always come first”.

Many congratulations on your Arts Foundation award – arguably a big moment for the spoken word world as a whole, a sign that it is being given proper recognition as an art form. Do you see it that way?

Yeah, that’s exactly how I see it! Nothing to add really. It just gives it recognition.

You have talked about “the snobbery about different kinds of poetry”. Do you feel that spoken word is looked down on in certain quarters?

I think it’s complicated and I change my mind all the time. First off, yes. As if it is less of a skilled poet who does spoken word. I used to say ‘it’s no different’ but actually, since I’ve been trying to figure out how to edit my book of poems – the ones I normally perform – I can also see that there is a real skill in really concentrating on how a poem looks and feels when read on a page. But whether you think you care mostly bout the page or the spoken aspect, the two are no harder, easier, better etc than the other!

It seems to me that one of your many strengths is that your poetry is rooted in the real world, covering subjects like grandparents and babies, as well as political issues like immigration, equality, feminism.  Do you think this is one of the reasons why spoken word may attract an audience that doesn’t feel so comfortable with other kinds of poetry?

I think for sure some spoken word is easier to understand. But not all of it. And some written poetry is too. I guess it’s like any art form. There’s an abstract painting by Picasso and there’s a beautiful scene by Monet. But they both have depth and attraction for different people. I think mine is definitely easy to understand, though. I’m not an abstract sort of person. My mind is pretty practical!

Your anti-racist poem, ‘Mathematics’, has been viewed an extraordinary number of times on YouTube. Do you use YouTube a lot as a way of getting your poems to as wide an audience as possible? How does it feel to have had such a huge number of hits?

I put poems up on YouTube at first because people asked me to. Then I thought I’d try to put up one a month. Mainly because some people like hearing poetry, seeing a poet and lots and lots of people can’t afford to come to gigs. Or don’t feel comfortable at a poetry night. I think YouTube is brilliant for that. It’s more horizontal. Equal. But I didn’t think ‘I’d love loads of people to see this’. Just had lots of people askng me if I was online, so I thought I should be. Especially people who wanted to use the poems in schools or youth groups etc.

One commenter on Write Out Loud  - a staunch grassroots politician herself – said: “So is poetry where all the young people who should be in politics have gone off to? We need them!” Do you see some of your poems as a different, more effective kind of politics?

No. I didn’t have to do a year’s free internship in Westminster to write poems! Politics is intimidating and stressful. I don’t hate politicians like a lot of people. Some sure I don’t like at all, but I think it must be a bloody hard job and I’m sure some, many go in cos they really believe they wanna do it. But it is only a certain confident type of person I think who can do it. And well, more and more people who can afford free internship placements or have a family friend, friend of a friend etc. Lots of young people have opinions and for your whole school life you don’t really get asked to share them – you study other writers and poets and maths theorists and historians. But you never get asked your story or your opinions on things as much. I think poetry is probably pretty good for that. But it doesn’t have to be political. I like poems about trees as much. Saying that, that is political, depending on who decides how many we can cut down.

You have said you began writing poems from the age of seven as a kind of diary. Do you remember what your first poem was about? Do you still have it? At what age, and where, did you first perform your poetry in public?

Yes. Age seven. I know it by heart!

Rainbows in the sky

No litter on the grass or fields

No pollution in the air

That’s how the World should be

So try to take more care.

My style hasn’t really changed since then. I read out my first poem in public, shakily, when I was about 23 or 24. Maybe later.

I didn’t. I write poetry. I don’t write poetry to perform it. In fact, I’d say I don’t really perform, I just stand up and read some of my poems. I’m not arty enough to say anything like “poetry chose me”. It makes me feel like an idiot! I do other things too!!

Did you find there was a thriving performance poetry society there when you arrived at Cambridge to study modern languages? Or did you have to start one up? Is that when you started writing poetry in French and German as well? What was your overall experience there?

I never read one poem out when I was at Cambridge and I wasn’t in any poetry society. I left uni and finished a masters before I ever read a poem in public. Cambridge was cool and I made a lot of great friends but I didn’t do anything to do with poetry. I was bar manager and I played football. That was enough. The studying was enough!

Your academic studies and are your subsequent career mean that you have travelled a lot. Have your travels influenced your poetry?

Erm, I don’t think that much. I have just always written about what I was doing at the time. If I’m in the countryside in France, I’d probably write some poems about that. If I’m on the loo in London, about that! I wish I could travel more, but that’s more because I would love to see other places around the world. Right now though, it’s not really possible. School run is first!

You do a lot of work in schools with organisations like Page to Performance. How do you feel  performance and spoken word can help pupils? Is it growing in popularity in the classroom?

The biggest thing is it lets them speak. That’s it for me. It lets them speak about themselves and tell their own story. Or just write it down. That’s what I’ve always loved about poetry. It let me clear my head and work out what I was thinking about things.

Your recent double CD has 12 poems put to music. Is that one way your poetry might develop?

I’m not sure, maybe. It’s just great to give anything a try. I’m not a great performer so I’ll always choose to perform my poems without music, I think. I just like being able to pause!! But I never know. I generally say no to new things to do with poetry – I find reading them scary enough. But I think I should stop that. I have loved sending off my poems and seeing what producers do with them.

Which poets do you particularly admire, or are inspired by? Which artists have been key influences for you?

Children’s poets I love. Those have been the main ones. And then songwriters and now all of the pots I meet when I’m away. There are so many brilliant poets about I couldn’t name any over others.

The Arts Foundation award is intended to help artists “to the next level”. You’ve said that the £10,000 award means that you can work on many projects that you’ve had to put aside in the past. Can you give us a clue about some of those projects?

Of course. Some video projects, a book about parenting and some projects aimed at younger kids amongst other things. I think the poets who work with primary schools are great and I write a lot for kids, I just only read them to my daughter. I think there is so much art and performance that actually can be wasted on adults. I’ve been to a few nights recently where people have been invited and just look spoilt – while I’m running around excited about free food or comedians or theatre lights, they just look like they’ve seen it all before. Because I guess they have. I always wish I could swap those miserable gits for a bunch of five-year-old kids who would totally and utterly appreciate it!

You have said: “I’m a mum who spends half the week working and half the week walking through parks and climbing trees with my daughter.” You’ll be launching a new book and starting a national tour in April. Will you still have the time to climb trees?

The whole tour is built around the school run. So yes. Climbing trees with my daughter will always come first. That’s why I’m sat up at 3am answering these questions. So that I don’t always have to work when she’s awake - I might pass out at some point but we’ll see. My mum worked night shift as a nurse and had two kids. This is nothing!

Background: 'I cried when they announced my name'

No, her style hasn't changed a great deal, lol.

Good on ya Hollie :)

Very refreshing and down to earth.