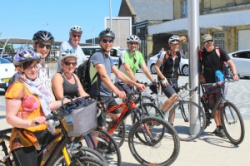 Six poets and two musicians on Tuesday set off on the first leg of a four-day, 100-mile poetry bike tour of the South Downs as part of an inaugural poetry festival stretching from East and West Sussex to Hampshire. The day proved to be the hottest of the year, with temperatures reaching 30C. Yet Hugh Greasley, Hugh Dunkerley, Stella Bahin, Paul Deaton, Sam Meekings, John Davies, Chris Hodgson, and Sophie Butler were equal to the task, reaching and reading at their five appointed venues, from Beachy Head, via Birling Gap, Alfriston, Charleston, to Firle.  At the final reading in St Peter’s church, Firle, one of the poets, Paul Deaton, said it had been a “spell-binding day”. 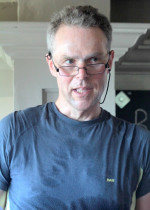 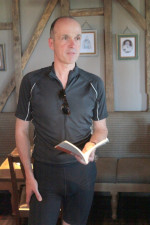 The cyclists met at and set off from Eastbourne station at 1pm, riding straight up on to Beachy Head for their first reading at the Beachy Head hotel. Still in sweat-soaked shirts and cycling shorts, they entertained those having lunch with simultaneous readings in three separate parts of the pub, Hugh Greasley, pictured left, trying to help us all cool down with his poem about wild swimming in the river Itchen.

The cycling was clearly not entirely a breeze. It included some off-road riding along the South Downs Way, and some hills where some poets took a breather and walked up. At the third stop at Much Ado Books in the impossibly-beautiful village of Alfriston  - where only a sign advertising a “roaring log fire” in the George pub failed to strike the right note – South Downs poetry festival organiser and bike tour organiser Tim Dawes said the reading would have to be a bit shorter than advertised: “I did intend for us to go on a bit longer, but we do need to give these cyclists a rest.”

Not much of a rest, though. Soon it was to the next reading at the famous Charleston, home of Vanessa Bell and gathering place of the Bloomsbury Group. I’m not sure you would have caught any of those celebrated aesthetes doing something as physically strenuous as a poetry bike ride.

The final reading was in another delightful location, the church of St Peter’s in Firle, which nestles under the downs. By this time the poets had had a chance to pitch their tents, change, take a few breaths, and deliver a marvellous poetry occasion. Paul Deaton, pictured left, who had ridden for two days just to reach the start of the poetry bike tour, contributed a poem that was both about cycling and a break-up: “We headed out evenings after work …  rode out that summer to an unending, un-setting sun”. 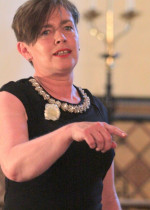 Stella Bahin, pictured right – “I write a lot about love” – took a chance with one or two risky rhymes in church, and charmed us with her villanelle ‘I chime’.

Hugh Dunkerley, pictured above, right, who leads the creative writing course at Chichester University, gave his definition of that “strange kind of creature, the prose-poem”, saying that what made it different from the short story was that it was not about narrative, “it’s all about association”. He also read a number of poems about fatherhood, and about his prematurely-born son. 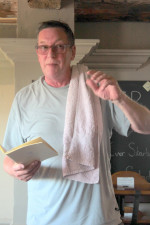 Brighton-based John (Shedman) Davies, pictured left, told the audience: “We’ve had a lovely day today. It’s the first time I’ve been on a poetry bike ride.” Poetry bike ride, or Wacky Races? He also claimed: “I was the first to arrive at Charleston, in spite of my great age.  It was partly because I gave them the wrong directions.” And why the Shedman monicker? “Occasionally I do things in sheds, usually at festivals.” He was once commissioned to write a poem by a woman who had consummated her relationship in such a location, and had confided: “ ‘He’s a different man in a shed.’ “ Shedman’s shed poem included these lines: “The tenderness of silence, the roof felt’s gentle creak.”

There was a poem called ‘Protest’ from Sam Meekings; and guest poets at St Peter’s included the inventive Jeremy Page, St Peter’s own popular vicar Peter Jones, and Firle co-ordinator and nurse Caroline Poplett, with a poignant poem about dementia.

Today (Wednesday) the poets were cycling on to Lewes, Ditchling, and Steyning, and facing a strenuous Thursday including Petworth, Midhurst, Petersfield, and Steep, famed home of Edward Thomas. Friday, the last day of the tour, will see the poetry cyclists zigzag across east Hampshire. The festival culminates in a big weekend over 22-24 July in Petersfield, with poets such as Andrew McMillan, Penelope Shuttle and Jonathan Edwards among those appearing.

I had persuaded my wife, and two good friends of ours who live in Eastbourne, and didn’t seem to mind a bit, to accompany me as we followed the bicycling poets across the landscape and through the villages of the South Downs. As we drove from Beachy Head towards Alfriston with the roof down, a breeze just ameliorating the heat, our soundtrack the song of skylarks, I mused on how it can be a tough job, working as a poetry journalist. But, you know, someone’s got to do it.

It is a great idea, Bob - and a way of linking the various venues of the festival, of "beating the bounds", if you like. Well done to all those who took part - and to festival director Tim Dawes, whose idea it was.

Greg, what a great idea this is. You've got me thinking now!
Bob

I like the idea of poetry and cycling. Thanks for going down to the poetry coalface to dig that report out, Greg! A tough job, as you say... ;-)