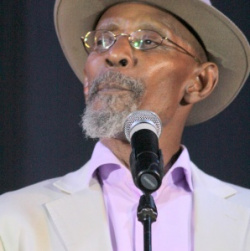 Saturday night saw me taking the train into Liverpool to see one of my all-time heroes – the legendary Linton Kwesi Johnson. Even better, he was being supported by one of my more recent all-time heroes, Hollie McNish. Poetic double bills don’t come much better than this, in my opinion.

The gig was being held in a venue that, to my shame, I have never been in before, despite it being open as a contemporary arts centre for several decades.  The Black-E is the former Great George Street Congregational Church, and its launch in May 1968 made it the UK's first community arts project, creating a centre where all the arts (performing and making, experimental and traditional) might engage with all the people who chose to come through the doors - young and old, disadvantaged and privileged.

The gig was part of a month-long series of cultural events under the banner of Wowfest, an annual festival that is organised and promoted by Writing on the Wall, a dynamic, Liverpool-based community organisation that co-ordinates projects and events that celebrate writing in all its forms.

The interior of the imposing and impressive venue was fully kitted out for performance use, including extensive theatre lighting, sound systems, stage, as well as a decently stocked and priced bar.  The staff were friendly and helpful too, which always makes a difference to a night out.

There was a definite festival buzz in the air - a combination of the summery evening, anticipation of the sold-out gig, the fabulous dub being played on decks on stage, and numerous joyfully loud reunions of old friends. The hugging, the laughter, and the clear delight of people in each other’s company made for a beautifully harmonious atmosphere.

Listening to conversations, and speaking to a few people myself, it became clear that the audience had come to see either one or other of the poets, not both. Being a fan of both, I was interested to see what the reactions would be.

Festival director Madeline Heneghan gave a short biography of Wowfest before handing over the mic to compere Levi Tafari, himself an old-skool dub poet, who treated us to a tribute poem clearly written for the people of Liverpool. 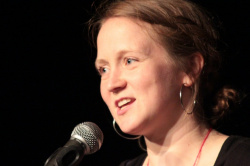 Hollie McNish - pictured at Wenlock festival last year - was obviously delighted to be supporting LKJ, and told us in her intro that she’d never accepted a gig so fast, and that she’d have been happy to perform for free. I know the feeling!  She began her set with some new poems, including ‘Wow’ about her baby girl admiring herself in the mirrors that Hollie had only just put back into the house, following a period of unhappiness about her post-pregnancy body. A great poem about the importance of having a working healthy body, as opposed to trying to conform to the constant drip-feed of how women’s bodies “should” look. Hollie was placing the audience into the palm of her hand with her usual consummate ease, charming the pants off us with incredibly funny observations.  The classic ‘Embarrassed’ clearly won over yet more of the LKJ crowd, and among several other pieces, we were treated to ‘Fucking Asylum Seekers’, a perfectly-wrought rant about her Daily Mail-reading granddad.  Finishing off with the poignant ‘Cherry Pie’, and stating her intention to get a glass of wine and enjoy Linton’s set, she received a respectably loud and ebullient round of applause and cheering.

Following the dub-filled interval, Levi Tafari opened the second half of the show with his poem ‘Duboetry’, before introducing the one and only Linton Kwesi Johnson, a man who belies his diminutive stature with quiet powerful dignity and dapper appearance, commanding respect with his gracious and reserved manner.  The first black poet to have his work included in Penguin’s Modern Classics series, LKJ - pictured at Camden last year - exploded onto the poetry scene in 1978 with the powerful and angry Dread Beat an’ Blood, heavily influencing the punk and reggae movements of that era and political thinking in the decades to follow.  For LKJ “writing was a political act and poetry was a cultural weapon”; his rhythmic stories of Brixton life and the realities faced by young black people in a racist and oppressive Britain had an international resonance.

Following a rapturous reception, he proceeded to deliver a mix of cultural history lesson and dub poetry, including observations on numerous examples of police brutality, corruption and cover-ups, through to the Sus law’s misuse of the Vagrancy Act to apprehend black youths, and Operation Swamp ’81, which led to the Brixton riots and consequent UK-wide rioting. One of the aspects of Linton’s poetry that I love and believe to be really important are his tributes to people, actually naming them, perfectly illustrated by his first poem ‘Five Nights of Bleeding’ (for Leroy Harris) and by the later ‘Reggae fi May Ayim’, an elegy for a fellow poet and activist who committed suicide, included the haunting line “yu final poem in blood pan di groun”.

The twin spectres of Enoch Powell and Margaret Thatcher were raised, as was the New Cross march, when 20,000 people marched in protest at the police and press reaction to a house fire in January 1981 in which 13 young people died. It was widely believed to have been an arson attack, with the National Front suspected as the cause:

instead a raisin di alaam

in spite a dem wicked prapahghanda

far up till now

nat wan a dem can tell wi why

One of my favourite poems ever, ‘Sonny’s Lettah’, came early in the set. It was curious to hear it without the musical backing I’m used to, but as soon as he introduced it a wave of audible pleasure crackled through the air.

Displaying humility and modesty, Linton didn’t signal the end of the first poem, segueing straight into his narrative, and you could see people were wanting to clap but not wanting to interrupt him. By the second poem, we were collectively prepared to show our appreciation, and began clapping heartily the second he’d finished, not giving him a chance to segue again. His response was to play it down, telling us “Alright, it’s alright”. We were like a bunch of over-eager kids though, bent on showing him our adulation, and he never got another chance all night to segue.

Towards the end of his set, it became clear that he was in increasing physical discomfort with backache, but gamely carried on without a chair, despite many offers by a besotted audience only too eager to be able to offer help to their hero.

True to his dignified and modest form, when it came time to do an encore, following the first standing ovation, he chose not to do a poem of his own. Rather, he performed the late great Michael Smith’s ‘Mi Cyaan Believe It’, and went out on yet another standing ovation, before making his way to the book signing table, where I was graced with the biggest warmest grin from him which lit us both up.  I can’t remember the last time I wanted a book signed by someone but … Linton Kwesi Johnson. Legend. Nuff said.

It’s fair to say that Hollie won over the Linton fans, and vice versa. A magical night that left me with a big smile and warm memories all through the next day. Wowfest has a number of events taking place right up until the end of May, all either free or affordably-priced. Get out to Liverpool and soak up a bit of culture, why don’t you?

Hey Harry - if only!! I'd snatch the hand off anyone who offered me a job writing about brilliant gigs!

Laura,
You could earn a living at this kind of thing lass!

It was an absolute honour and all my pleasure to be able to go and then come back to write this review. Amazing night, poets on fire! Was bouncing all the way home :D

Well, what a fabulous review of what was clearly a fantastic night, Laura. You certainly have us all jealous by creating a sense of the atmosphere, I am sure others will agree. Brill.