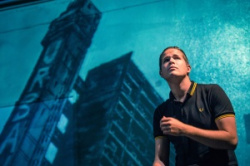 I first saw Luke Wright’s What I Learned From Johnny Bevan, which focuses on the broken dreams of the Tony Blair years, almost a year ago, at its debut performance on a Saturday lunchtime in Shropshire. The second time was at the Soho theatre in London on Wednesday night. In between it has garnered praise and awards at the Edinburgh Fringe, while Labour has resoundingly lost the general election and elected a very un-Blairite new leader.

So what did I learn from seeing this hour-long, tour-de-force again? That it is about friendship as much as it is about politics, and about how youth’s ideals can turn sour. That with the election of Jeremy Corbyn, What I Learned From Johnny Bevan is perhaps more of a historical document than it was. And that with this show Luke Wright has pushed the boundaries of performance poetry, and shown its power and potential.

The plot focuses on the relationship between middle-class Nick, who once dreamed of writing novels and is now a culture journalist, and working-class Johnny, a performance poet at uni who became a political activist but is now a disillusioned dropout, drifting towards Ukip. It also hinges on a council estate that could have been improved by New Labour but instead has been colonised and appropriated for a “dystopian” and very expensive weekend festival.

Wright’s feat of memory – a gift he makes light of during the show – is nevertheless wondrous to behold as he delivers this epic, intelligent, questioning narrative. The rhyme is never forced; it is constant and sounds so natural, you hardly notice it is there. One of the standout sequences is the moment at uni when Nick meets Johnny for the first time at an open mic poetry night, and promptly puts away laddish things, as well as swapping his law studies for Eng Lit. He listens to Johnny declaiming a passionate “poem within the poem”, ‘Taking Tea with the Tories’, about John Major’s 1990s crew, which really does convey the power of performance poetry, and focused political satire.

Nick and Johnny revel in the “tribal schadenfreude” of Labour’s landslide victory in 1997, that amazing night, and Johnny promptly gives up poetry for politics: “Someone’s gotta change the world, I’m gonna be that bloke.” They later go their separate ways. Nick eventually tracks Johnny down years later – via Facebook, naturally – to find him living in a squat, having concluded that “there ain’t no middle ground” and that “the Labour Party’s over”, and veering towards the politics of Ukip.

Johnny’s new political direction may surprise the audience as much as it does Nick. But Luke Wright knows this territory and has explored it before. His long poem ‘Essex Lion’ told the story of a group of credulous Clacton campers who were convinced that they had seen a lion - people who were desperate to believe in something, to swallow anything. (It may be mere coincidence that Ukip’s only parliamentary seat is Clacton, held by Tory defector Douglas Carswell).

What I Learned From Johnny Bevan is also about class. At the end Johnny says to Nick: “I know you get it, but do you ever feel it? Does it own you?” Wright deserved the resounding applause he received from the Soho theatre audience for the audacity of his reach. Could his show – directed by Joe Murphy, with music by Ian Catskilkin - be transformed into a TV film, you wonder. There is already a book. There have been a few tweaks since I first saw it at Wenlock poetry festival, although I understand that it has not been altered to take account of Jeremy Corbyn’s takeover and possible transformation of Labour. However, I did detect a note of optimism in the final line on Wednesday night that I didn’t hear last year. Maybe I wasn’t listening as well as I should have been.

Tony Blair has recently expressed his bewilderment at the popularity of Jeremy Corbyn. A trip to see to What I Learned From Johnny Bevan might help the former Labour prime minister in that regard. I guess he would have to go incognito, of course.

I loved this show when I first saw it at the Latitude Festival last summer and even more so at the Edinburgh Fringe. It is deeply moving and resonant if you were liked into the failed hope of the Blair years and the state we are in now. The writing is urgent, poetical and knowing. Go see if you can.

It sounds fantastic, Greg, and a great review.