Competition closes in 16 days, 2 hours. Get details and Enter. 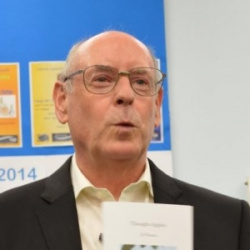 Isabel Rogers was this week appointed Hampshire Poet for 2016. But what does it mean to be a local poetry figurehead? Here are the thoughts of Staffordshire’s current poet laureate, Bert Flitcroft:

"Having said no for three years, I finally succumbed last year to the idea of applying for the county’s post of poet laureate, and it was with no little surprise that I found myself being “inaugurated” in October. I use the word “succumbed”, with all its implied resistance, carefully. Although I had begun to feel the need to take my poetry in new directions, I had not felt ready for the level of commitment involved – there are so many other things I would like to do with my time.

I have no idea about other laureates, but in Staffordshire the appointment is made by application form to the county council, which asks candidates to present their view of how they see the position and to send in a sample of three poems. There is then a formal interview, with the heads of the council’s library and arts services, and a reading of the poems submitted.

The position requires the laureate to write at least two officially commissioned poems for the county and to write two further commissions of their own choosing.  My first commission was to celebrate the opening of the new, super-modern library in Stafford and I am currently working on a second one of my own choice. There are also a number of specific requirements with regards to readings and other events  -  the standard sort of things one might expect - but more importantly perhaps, to mentor the Staffordshire junior laureate, who in the case of Matilda Houston-Brown is only 14 and already a lovely, accomplished poet.

I shall do my best of course to build upon the excellent work done by the county’s first three laureates, Mal Dewhurst, Tom Wyre and Gary Longden, but the position does offer the freedom for each laureate to make of the post what he or she can.

Being retired after a 40-year career in education, I fight against the idea of poetry becoming “work” and a second career, although I fully recognise that the poetry scene is heaving with people trying to do just that. And why not? Leading a creative life is for a good many people the road to happiness and fulfilment, and I include myself in that.

I have tried for most of my grown-up life to follow Camus’ rules for happiness, one being to lead a creative life, but a second one being to live without ambition. And therein lies an almost irresistible source of internal conflict for many people who would like to have their poetry (and themselves) more widely recognised. It seems that for many the simple joy of writing and the ambition just to write better poetry is not enough.

One or two of you reading this might recognise my name and will know that I too have been lured into the odd spot of humblebragging and self-promotion on social media, but you may also know that I edit a Facebook page titled To spread the Poetry Word which features a monthly poet and offers potential readers (and buyers!) a taste of their work. Which brings me back to the idea of laureateships. I am much more interested, as I am sure many of you are, in the promotion of poetry itself and the need to find new readers, and a laureateship can be the perfect vehicle for this.

George Mackay Brown is known to have said: “Write the runes/ then remain silent” and part of me feels that the identity of a laureate should be kept secret, leaving the poetry to do the work. Not practical, I know, but a feeling all the same.

So, I am now two months into the “job” and after a flurry of invitations it has gone a bit quiet over the festive season. In a way I am thankful for this period of quiet reflection and a chance to plan a campaign for the next two years.

I have my plans and hopes, which is quite exciting. One of them is a much better use of libraries as hubs for poetic and cultural activities - although at the moment our libraries are in the throes of a county-wide reorganisation.

Two things have become clear. One is that it would be very easy to run oneself ragged, to very little effect. The other is that Staffordshire offers its own challenges. It is not just a rural county but a large county, criss-crossed by lanes and minor roads. It is also extremely diverse. Stoke in the north is a unitary authority and administered separately and the nearest we have to a large urban complex, while the rest is populated by pockets of industry and a number of small (relatively) towns, many of them with a lot of history behind them. Consequently it is difficult to find, to pin down, something that could give it a single cultural identity. Perhaps that will be the greatest challenge, and the greatest opportunity."

Bert Flitcroft grew up in Lancashire and is a graduate of Sheffield University. In 2015 he was poet in residence at Southwell poetry festival and he has appeared at other festivals including Edinburgh Fringe, Birmingham, Lichfield, Ilkley, Buxton, Stafford, and at The Door at Birmingham Rep. He has two collections of poetry published, Thought-Apples, 2014, Offa’s Press, and Singing Puccini at the kitchen sink, 2012, Fineleaf.

Sentenced to death for writing poetry ►