Lines in a station waiting room: poets brighten up the day for passengers 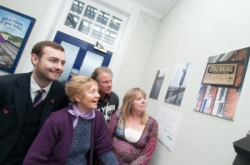 Poems created during a poetry workshop at Stalybridge library are now adorning the walls of platform four’s waiting room at nearby Stalybridge station.

One of the poems is by 98-year-old Thora Beddard, whose poem, 'Under trhe Archway', evokes Kitchener's recruitment poster from the first world war, and the station buffet bar when it was gas-lit. Thora is the founder of the Friday Writers group that meets weekly in Ashton-under-Lyne. Other waiting room poems are by Sandy Parkinson, Chris Walton, Jo Femia, Andy N, Nigel Astell, and Liam Hunt.

Creative writing tutor Rachel Laurence, of Kirklees College, said: “Even as the last poems were being set in place, people were coming in to read them and take photographs. The launch was a great finale to the whole project and for the writers. It is a great feeling for them, knowing that people will be entertained by their poems for a long time to come.”

Will Munton, First Transpennine Express station manager at Stalybridge, said: “We are committed to supporting the local community across our network. The exhibition in the platform four waiting room is the latest in a series of fantastic poetry exhibitions at stations along the TransPennine route, with Dewsbury and Huddersfield already benefiting from this wonderful initiative. The poems add that local touch which visitors will really enjoy.”

◄ For those in peril on the sea: poets deliver their words to aid refugees at all-day reading in London

Jumping off the Train

how is it
everyone gets their
train late home?

Julian Jordon, Judy Gordon and myself once held an impromptu Write Out Loud meeting in the wonderful station buffet bar at Stalybridge, as featured on the famous rail ale trail. Many thanks to Andy N for featuring the waiting room poems on his blog http://onewriterandhispc.blogspot.co.uk/2015/11/poetry-at-stalybridge-train-station.html