For those in peril on the sea: poets deliver their words to aid refugees at all-day reading in London 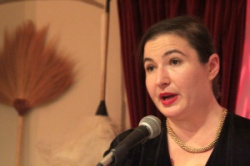 “When I was growing up the Mediterranean was a beautiful place where you went on holiday. I think the tabloids have subverted it into something else.” The words of Peter Raynard, author of the Proletarian Poetry blog, at a 10-hour poem-a-thon held on Saturday in London to raise money for refugees.

The day was the brainchild of poet Jacqueline Saphra, who said on her fundraising blog: “I woke up one morning to more horrific news of refugees and thought of my own relatives who died during the second world war, how the world turned its back on the Jews in Europe using the same arguments our own governments are using now. I thought I had to do something to raise funds and awareness to make a small contribution to alleviating this terrible humanitarian crisis. I know a lot of poets and I thought there must be a way to put our skills to good use. I put out a call for help with this and received an overwhelming amount of support.”

Dozens of poets, all reading for eight minutes each, turned up from far and wide to read at Vout-O-Reenee's Club, near the Tower of London. Poets like Peter Rumney, reading funny and poignant poems about his refugee grandparents. Saradha Soobrayen delivered passionate, emotional poems about the plight of the displaced Chagos islanders, forcibly removed from their Indian Ocean homes to make way for an air base. Dino Mahoney’s heartfelt ‘Stowaway’ told the story of a young man, “a mangled mannequin”, who fell to earth in Mortlake, south-west London, from a plane above Heathrow.

Ruth Valentine, who has worked with refugees for many years, read poems such as ‘Where the Bodies Are’, about Chile and Pinochet, and one about the aftermath of a car bomb in Baghdad in a quarter frequented by writers. Seraphima Kennedy, pictured, read a couple of remarkable poems that amounted to a dialogue between a housing officer in London, and an aid worker in south Sudan: “Last time you were here you jumped when someone moved their chair back too quick.” The response from the aid worker referred to dealing with the media, “NGOs peddling fly babies, this is how we get our money”. It added that “you haven’t mentioned child soldiers”, and talked of being shown pictures of Hollywood star Rachel Weiss, and being asked: “ ‘Is she your sister?’ ”

I was only there for three hours of the 10, and so this report is just a snapshot of what took place. The quality of the poetry may have been a little uneven at times, but with so many poets there was also an opportunity to hear many fine voices for the first time, and to make a note to find out more about them.

Other refugee initiatives were mentioned -  Marie Lightman’s Writers For Calais Refugees; an anthology by Eyewear, Refugees Welcome: Poems in a Time of Crisis; and Poems for a Liminal Age, an anthology edited by Mandy Pannett in support of Médecins Sans Frontières. There is also the Over Land, Over Sea anthology in support of refugees, that was featured in Write Out Loud recently.

Lines in a station waiting room: poets brighten up the day for passengers ►