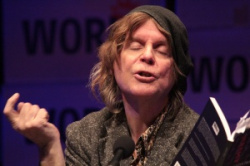 Jeremy Reed added a touch of sparkle – quite a few touches of sparkle, in fact – to the Aldeburgh poetry festival on Friday night. Sprinkling handfuls of blue glitter into the air at regular intervals during his performance, the poet in the beret – who has been dubbed poetry’s David Bowie but has more of Tom Waits about him, to my mind – told the audience: “We are here to celebrate glamour – you never see glamour at poetry readings. That’s why I represent it.”

Reed has a remarkable way of delivering his poems, sometimes menacing, always theatrical, his voice often whispering and hissing, lingering lovingly over words like “fetish”, or repeating lines as if they were the chorus of a song.  At the same time one hand clutches and grabs at the air. The whole performance is exhilarating and somewhat old-fashioned at the same time, reminiscent perhaps of the Beat poets.

He introduced one poem by saying that it was about “a friend of mine who used to rob all the major West End stores in London”. Another, ‘My Favourite Junkie’, concerned his regular meeting with a friend “coming from 20 light years away, in a heroin galaxy” outside Foyle’s in Charing Cross Road. One poem mentioned the Bowie song Let’s Dance; another took a Bowie track, Five Years, as its title. ‘Dangerous Blues’, “written for an old friend, Derek Jarman, when he was dying”, included painful physical details.

Reed’s great strength is his volumes of poetry about icons of popular music. He has a new collection  out about the Rolling Stones, but did not read anything from it at the Britten Studio at Snape Maltings. His most memorable poem of the night was ‘Sooner or Later Frank’, his tribute to Sinatra: “The voice a lived-in, confidential baritone that always seems familiar … an emotional outlaw who never gets the answers right … gangsterish felt hat angled defiantly … for studio or for mafia wear.”

Reed, who could possibly audition to be the next  Dr Who, told the audience just before he left the stage that he likes to write in the London bar “where Ruth Ellis notoriously shot her lover in the 50s”. Maybe he wasn’t everyone’s cup of Earl Grey among the Aldeburgh audience.   But his demeanour and air of raffish heritage as he distributed his magic dust was that of an uncompromising performer, a true Aldeburgh wild card.

Miller’s poems from the Caribbean are delivered in a soft voice but often carry an angry, deeper message. Others are full of warmth, such as his poems about the Singer Man, and his role in helping to dig roadside trenches. It was good to hear poems from his other collections, as well as from his Forward-winning one.

Mort grew up in less exotic Chesterfield, which she said was sometimes referred to as “the armpit of Sheffield”.  She read poems from her prizewinning first collection, Division Street, and from her forthcoming collection about women mountaineers. Mort is herself a climber and long-distance runner, and she said poems in the new collection include ones about body image, diet, and a series addressed to Alison Hargreaves, the first woman to climb Everest  unassisted, but who died shortly afterwards on K2. She also included a poem about girl strip cartoon hero, Beryl the Peril, and her grandmother that she wrote during her Aldeburgh prize residency: “Beryl getting shit-faced with Desperate Dan … her plaits are strings of sausages.” Another poem about diet? Well, perhaps.

◄ Celebrate with a brew! Film of poem by Julian Jordon on theme of refugees and cuppas wins TV award

'Did you leave with the winnowing scythe, the burning heat of August?' ►

I'm going to try and find some video of him.

He is intriguing, Laura, although having seen him appear twice more at the festival, I'm not so sure about the Tom Waits comparison now. Jeremy's stated musical heroes are Marc Almond and Lou Reed (no relation).

Never heard of this fella but I am seriously intrigued now!

I remember Patricia Hayes, Graham. I think Jeremy Reed is in touch with his feminine side, but I'm not sure that is the look he is aiming for. Interesting.

Sorry, but am I the only one who thinks this picture of Jeremy is a dead ringer for Patricia Hayes who used to accompany the comedian Arthur Haynes?

Great summary Greg. I liked Aldburgh a lot when we were in Southwold but sadly at the wrong time for the festival.