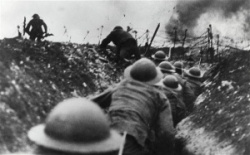 The whistle blows to sound the charge

and over the top they bustle and barge,

covered from head to toe in mud

and soon tainted with flesh and blood.

Up the ladder with slippery rungs,

a scream of rage from terror filled lungs,

adrenalin coursing through every vein

with the fear of not coming back again.

tangled in barbed wire, feel a blast of heat

as a shell explodes just off to the right,

leaving in its wake such a dreadful sight.

Bullets whining and whizzing by

calling the names of those who must die,

screams for help from men in distress,

their lives torn apart in the horrible mess.

Distant machine-gun fire from a bunker,

Looking for shelter to weather the storm

and praying he won't come to any harm,

a private, no more than twenty years old,

who joined the forces, feeling gallant and bold,

His heart skips a beat; his eyes open wide,

a smoky shell crater; a place to hide.

He dives down, into the shattered remains

of fathers and sons without any names.

The bile is rising along with his fear

as he senses his breaking point is quite near,

alone in a world of death and destruction,

ducking down and beseeching redemption.

A boom to the left, the ground heaves and shakes

and that final shell is the shock that breaks,

as a scream wells up from deep down inside

that is far too hysterical; too terrified to hide.

Breaking right through the walls within

and carried aloft on cacophonous din,

eyes squeezed shut to block out the sight

as he enters a world of eternal night.

The whistle blows to signal retreat

and men bathed in death are now on their feet,

running and slipping on the lives of their friends,

aware that each heartbeat could yield a dead end.

From the crater he watches with a vacant stare,

Snuggling deep into his mother's embrace

as he gazes up into her sweet smiling face.

Curling up into a fetal ball,

he doesn't register the Sergeants call.

He's lifted and carried to be safe from harm,

saved by his friends; his brothers in arms.