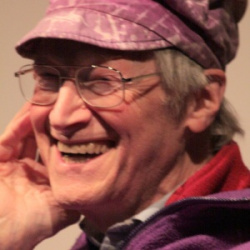 It was a day when the anecdotes just kept on coming. Allen Ginsberg was “very, very drunk, and quite angry that he had been kept waiting for so long” when he finally got up to perform at the first International Poetry Incarnation at the Albert Hall 50 years ago, Michael Horovitz, pictured, told the audience at the Reincarnation of the legendary poetry event at the Roundhouse in London on Saturday night. Nevertheless, Ginsberg “made his mark indelibly on his and subsequent generations”, added Horovitz, aged 80, one of the prime organisers of the original event, and of this anniversary one, too.

Another Albert Hall performer, Pete Brown, who also wrote the lyrics for the 60s band Cream’s greatest hits, said: “Yes, I was there, I was very young, it was my apprenticeship.” He paid tribute to the performance of Adrian Mitchell at the Albert Hall, and the man who wrote the words for the Cream song ‘Politician’ added: “I’m still angry after all these years. It’s great.”

Barry Miles, biographer of Ginsberg and Charles Bukowski, and one of those behind the counter-culture newspaper International Times,  spoke of Ginsberg reading at Better Books in Charing Cross Road, where Miles was then manager: “It was packed out, Andy Warhol was there, Donovan, everyone seemed to know about it.” Horovitz said that Ginsberg, knowing that other big-name poets were in London and Europe at the time, wanted to build on that momentum. The idea of an Albert Hall gig was conceived, and implemented in just 10 days  – hire fee £400, tickets priced at 10 shillings (50p) or five shillings in advance. On the day Horovitz went with Ginsberg, Lawrence Ferlinghetti, and Harry Fainlight to the Albert Hall, and saw the thousands gathered outside: “At first we thought it was agitators or football fans - but it was all for a little gathering of poets.”

Earlier, on the penultimate day of the Last Word festival at the Roundhouse, there was a screening of Wholly Communion, the Peter Whitehead film about the Albert Hall event that can be viewed on YouTube. It begins with Ginsberg chanting a Tibetan mantra, accompanying himself on finger-cymbals, and includes remarkable scenes involving Harry Fainlight, in which he stumbles during a long poem about an LSD trip; the audience begins to heckle, Fainlight is ushered from the stage but then argues and says he wants to continue, and the audience is apparently quietened by a Dutch poet in the front row chanting “Love!” over and over again.

There were no such scenes at the Roundhouse on Saturday night, although the show was running late by 40 minutes at the interval, when I had to leave. And if the audience could not match the Albert Hall numbers, the Roundhouse’s Main Space was nevertheless packed and enthusiastic. In a nice touch, audience members were handed flowers as they filed in, just as they had been at the Albert Hall.

In panel discussions during the day, it was noted that there were no women among the poets performing at the Albert Hall. As Michael Horovitz observed, this was just one of the many things that had improved in the poetry scene 50 years on. The first half of the Roundhouse show included Malika Booker, Cecilia Knapp, Patience Agbabi, and Libby Houston, who recalled being in the audience at the Albert Hall, and witnessing Allen Ginsberg taking his clothes off at a subsequent 60s event. She paid tribute to the Beat Generation poets for breaking through to the people, and circumventing the “tight-arsed” British poetry establishment of the time. In a poem she wrote after his death, she talks of that “huge claim to be heard”.

Another highlight of the Wholly Communion film is the performance by Ernst Jandl of a sound poem about sneezing, originally by Kurt Schwitters, in which he was “aided” at the Albert Hall by Michel Horovitz and Pete Brown. As Horovitz recounted on Saturday night, “it was near the end of a very long evening” in which he and Brown had become somewhat affected by the clouds of pot smoke wafting around the Albert Hall. “You can see Jandl looking very exasperated as we tried to follow him in responding to the pattern of a sneeze.” He summoned Brown back to the Roundhouse stage to improve on their performance of 50 years ago – a striking, funny, and moving moment.

It was also moving to hear Horovitz introduce his son Adam, “a poet who has found his own voice”,  and also pay tribute to Adam’s mother and his wife, the poet Frances Horovitz, who died in 1983.

And there was a rousing conclusion to the first half, when Sasha Mitchell, daughter of Adrian Mitchell, one of the Albert Hall stars with his memorable poem, ‘To Whom It May Concern (Tell me Lies about Vietnam)’, took to the Roundhouse stage to perform two of her father’s poems set to music, including one about the Chilean singer-songwriter Victor Jara, murdered in the aftermath of the 1973 coup.

The discussions, recollections, film screening, and Reincarnation show curated by Horovitz and Claire Leavey – even if I had to catch the last train home and missed the full performance – made it an absorbing, unforgettable day, a fitting tribute to the original Albert Hall event that freed British poetry from some of its bonds. Just as the original audience had included a number of celebrities, it was good to see such rock legends as Van Morrison and Jimmy Page in the audience at the Roundhouse. The beat, undeniably, goes on.

'As if what exists, exists so that it can be lost and become precious' ►

Thanks Greg. A wonderful trip down memory lane.
Not sure whether that was before or after Ginsberg performed at the Albert Hall [?] having arrived in London after being crowned Queen of the May in [was it Poland?]
Who could also forget Ginsberg sweeping up behind the Savoy Hotel during the prom.to Dylan's Subterranean Homesick Blues.
Thanks for this