THE BALLAD OF THE LOOPY HAMSTER 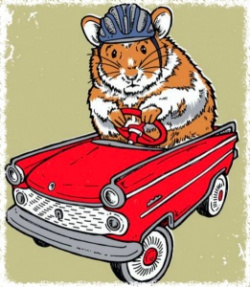 "You'll be safe, I promise", reassured his mum.

“But its not you who’ll end up sat on your bum!”

A conversation they’d had most every week

but it didn’t make his knees feel any less weak.

go finish your homework whilst I clean up this house.

The show doesn’t start till the end of the week

and all this chatter is making me Squeak.”

Harry slumped away with a frown on his face,

it wasn’t as if he was scared of the race,

he loved going fast with the wind in his hair

but a loop-the-loop, well that just wasn’t fair.

The circus wagons rumbled and bumped their way

from village to town over many long days,

the shows were such fun and well worth the wait

from building the tents up to opening the gates.

Smiling families came from miles around

to watch the acrobats, the magic and the clowns

but the act they were waiting for, the No.1 star,

was Harry The Hamster in his red racing car.

The children beamed as they watched all his tricks

skidding and spinning his way round the track

until it was time for him to aim for the roof

and attempt to complete the dreaded loop.

A family tradition, passed down through the years

but that didn’t help at all to get him over his fears.

He hadn’t yet made it, though he’d tried really hard,

a last minute panic and he skidded into the yard.

That night as he slept, he tossed and turned

as he dreamt of disaster at the very last turn,

he made it to the top but then ran out of speed,

he landed on his bum and was not very pleased.

The weekend came and they raised the tents

but Harry wasn’t happy for he knew what that meant.

He put on his costume and polished his car

with its flashy white stripes and the shiny chrome bars.

The crowd started clapping and cheering him on

but harry would be glad when it was over and done.

He whizzed round the track going faster than ever

he was determined this time; it was now or never.

He made the turn lifting up on two wheels

to the sound of cheering and children’s squeals,

racing along to the end of the track

where the loop was waiting, there was no turning back.

He entered the loop with a scream of pure fright

that turned into laughter as he started his flight,

pulling up into the climb, he was having so much fun

as he reached the top, would he land on his bum?

But luck was now with him, he finally saw

he was going to make it, so he cried “Yee Haw!”

Up and under the crest of the loop

he was flying back down with a “Whoop Whoop Whoop!”

and he couldn’t believe just how good he now felt,

heading straight for the cushions at the end of the run

he came to a stop with a jump; he had won!

The crowd was standing and cheering for more

from Harry The Hamster, the star of the show

as he strutted his way back over to the start

with a spring in his step and joy in his heart.

His friends and his family all shook his hand

till he felt like his arm was a rubber band.

His mum looked on with a tear in her eye

she knew he could do it if he would only try.

That night as she tucked him up in his bed

she bent and kissed him on his soft furry head

“I’m so proud of you, Harry, for not giving up hope

and I always believed the fact that you’d cope”.

Harry smiled and gave a twitch of his nose,

holding his mum in a cuddle so close,

as a lullaby, she started to sing and hum,

DREAMING FOR ALL TO SEE ►